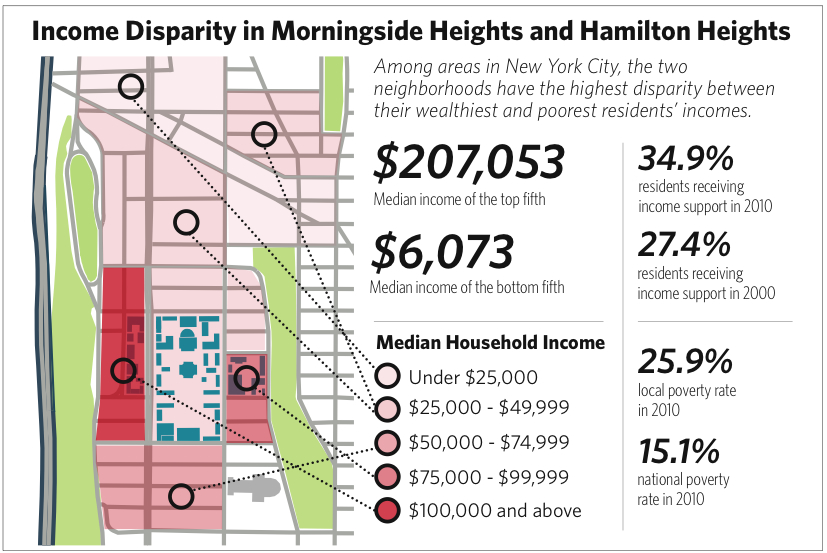 The Morningside Heights and Hamilton Heights neighborhoods have the highest income disparity in New York City, with the top fifth of the population making more than 30 times that of the lowest fifth. The median household income of the highest fifth of the population is $207,053—34 times $6,073, the median income for the lowest fifth, according to a report by the Census Bureau released in November. The metropolitan area of New York City and northern New Jersey already sees the greatest national gap in income between the wealthiest and the poorest. Walter South, a preservation architect on Community Board 9, which represents West Harlem and Morningside Heights, cited the simultaneous increase in the salaries of educational administration and stagnation in the salaries of the working class as the main reasons for the inequalities in Morningside. While the region has seen an influx of upper-middle class families, he said, it also features the highest concentration of public housing in the city. "People that have lived here the longest have much lower incomes than people moving in here the past five or ten years," South said. As of 2010, 34.9 percent of residents are receiving income support, up from 27.4 percent in 2000. The local poverty rate, at 25.9 percent, is over ten points above the national level. Flora Davidson, professor of political science at Barnard and director of the urban studies program, said that the inequality in wealth increases social capital. The concentration of such distinct social groups in one neighborhood "leads to mutual education," allowing people of different backgrounds to interact with one another, she said. Students should be encouraged to develop "a sense of importance and responsibility of engaging with the neighborhood." Still, she said that the disparity perpetuates even greater disparity because children from lower-income families end up missing opportunities to break the poverty cycle. The statistic "might mean that this is a healthier area in terms of being a mixed neighborhood, but it doesn't tell you a lot about what's really happening on the ground," Davidson said. Besides a huge gap between the extremes, the neighborhood sees drastic fluctuations in median household income from one block to another, according to data collected from 2005 to 2009 in the Census Bureau's American Community Survey. In Census Tract 205, which spans 114th to 122nd streets and Broadway to Riverside Drive, the median income is $114,722. But in Census Tract 20901, which spans 123rd to 126th streets and Amsterdam to Manhattan avenues, the median income is $19,816. The growing income divide has recently motivated community members to mobilize. Inspired by the Occupy Wall Street movement, State Senator Adriano Espaillat and City Council member Ydanis Rodriguez organized a march down Broadway for northern Manhattanites in November, and an OWS subgroup, Occupy Harlem, has held protests on the subway. Last week, efforts to secure living wages for retail workers culminated in a rally at the Riverside Church attended by over 2,000 people. Politicians, clergy members, and labor activists gathered to promote the Fair Wages for New Yorkers Act, which was introduced in City Council last Tuesday and is still under heavy debate. City Council speaker Christine Quinn has yet to take a final position on the bill, which has worried some of its proponents, since the council speaker can effectively kill the bill if she does not bring it to a vote. news@columbiaspectator.com