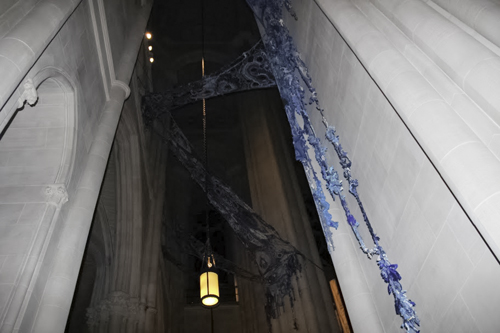 The Value of Water, Sustaining a Green Planet includes works ranging from paintings to installations like the one pictured here by 41 artists.

The Cathedral of St. John the Divine (1047 Amsterdam Ave., at 112th Street) proves to be not merely a house of religious worship but also a ground for dialogue about current global issues. For several years, the cathedral has worked to spark thought and conversation concerning the ecological water crisis. Its current art exhibition, "The Value of Water, Sustaining a Green Planet" continues this trend, and is supplemented by many events designed to engage the community. The exhibition, which will be on display until March 25, 2012, features the work of 41 visual artists, including renowned figures such as Mark Rothko and Jenny Holzer. The body of work encompasses many mediums and styles but has an underlying common factor. As stated in the cathedral's fall newsletter, the artists "have created wondrous art that speaks to us about water, about our society—national and global—and about the imagination." The works take on a sense of monumentality derived from their quiet, grand setting. Curator and participating artist Fredericka Foster feels that the cathedral also provides the perfect way to connect today's different water activist communities and to bring their messages to the public. Foster described her approach to selecting works that could open a dialogue: "There's a million people coming into the cathedral per year. Not everyone has an art background, and I wanted to make sure I could have work that would speak to everyone." Perhaps for this reason, the exhibit contains both conceptual pieces and more literal depictions of water. Many works succeed in evoking thought, such as Gulsen Calik's delicate sculptural piece "Lost in Water." Calik preserved abandoned items from a village destroyed by flooding in small bottles of water and transformed the liquid from a destroyer into a preserver. Other works, such as Ray Charles White's "Adirondack Lake Study," seem to be included merely for their aesthetic qualities. The exhibit doesn't rely solely on a visual experience to convey its message. The schedule of events adds a participatory element. Stephen Mitchell's Oct. 10 reading of his new translation of "The Iliad" had the potential to resonate with Columbia College students. The text was called under scrutiny because it showcases the potential of water to drag the world into lengthy wars. The reading tried to spark dialogue about the possible disastrous effects of the water crisis, but the connection to the text appeared far-fetched. Another event, an "Evening of Witness," appears more relevant. Planned for early March, this four-hour event and consequent all-night vigil will respond to water-related disasters of the last decade, both natural and caused by human influence. Participants from Haiti, Japan, and the Mississippi Delta will tell their personal stories and attempt to weave them into a global narrative. Foster is optimistic that the exhibit will be effective. "It seems somehow being connected with water, that people intrinsically become very respectful of that (their role in the water system)," she said in an email. "I was hoping that by not lecturing them about it, but by making a beautiful space for them, that perhaps that would help."