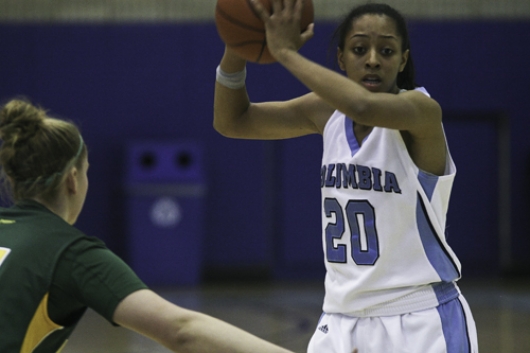 Junior guard/forward Tyler Simpson was the only Lion to score in double digits, recording 13 points in addition to four rebounds.

Poor shooting and an inconsistent level of urgency sunk Columbia women's basketball (2-11) in its attempt for a second straight win, as it fell 53-45 to Lafayette (6-9) Wednesday evening. Leopard sophomore forward Kristan Liddle scored nine points and freshman forward Emily Homan had 11 rebounds for the hosts, who scored on 42.6 percent of their shots, compared to the Light Blue's 27.6 field goal percentage. Junior guard/forward Tyler Simpson led the Lions with 13 points and added four steals, and freshman forward Amara Mbionwu continued her strong play, grabbing an impressive career-high 15 boards. Despite Lafayette's height advantage, the Lions outrebounded the Leopards 44-31 and held the advantage in second-chance points, 21-4. Columbia started the game strong, opening up a nine-point lead in the first 12 minutes. The game was tied with a little over a minute to go in the first half, but after a pair of successful free throw attempts by Lafayette junior guard Ashley Springer, the Leopards held the lead for good. "They changed their defense and started getting the ball out in transition," Lions head coach Paul Nixon wrote in an email. "They basically took the game plan that we were running, and used it." Columbia made a late run after being down 18 with four minutes to go, but could not cut the lead to less than eight, which was the final margin of the loss. "We did pretty well for the first 10 minutes of the game, and pretty well in the last five minutes," Nixon said. "Otherwise, it was not a very good performance at all." Senior guard Melissa Shafer, the Lions' leading scorer on the season, had a rough shooting night, going only 1-12 from the field for three points. She entered the contest averaging about 11 points per game. "I feel like they were aware of where she was," Nixon said. "I think a lot of times, she had to take the shot with a hand in her face, but it's not like they were in a box and one." Columbia next hosts Morgan State on Wednesday in the team's final tune-up before Ivy season. Tipoff is scheduled for noon at Levien Gymnasium and conference play begins Jan. 15 at Princeton.