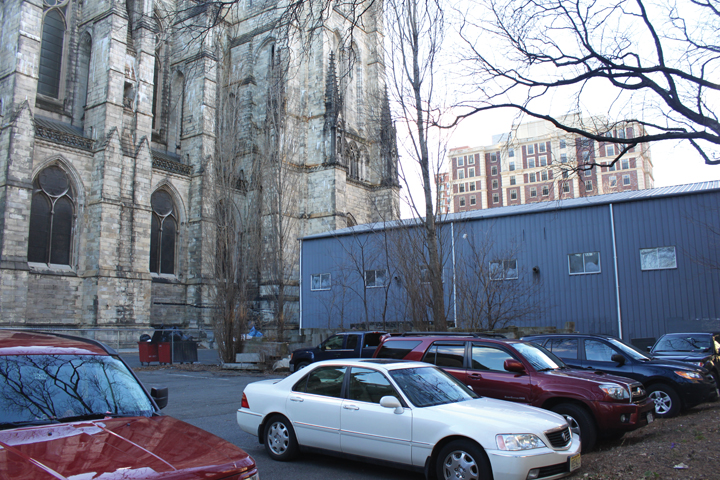 Administrators of the Cathedral of St. John the Divine are planning a new residential development on the cathedral grounds—but local preservation advocates say it will tarnish a historic monument.

Steve Facey, executive vice president of the cathedral administration, said that real estate deals on the grounds are necessary to improve the cathedral's ailing finances.

If built, it would be the second apartment building on the grounds, after the 2008 construction of Avalon Morningside Park in the southeast corner of the cathedral's estate.

"We knew we needed two projects to make it work," Facey said. "With one, we somewhat stabilized the finances. The northern development will put us not only in a stable but a sustainable situation."

"We're watching essentially the systematic chipping away of this site," Gregory Dietrich, historic preservation consultant and advisor to the MHHDC board, said.

Cathedral officials want to see the residential development built at the north end of the grounds, on 113th Street between Amsterdam Avenue and Morningside Drive. A parking lot and several sheds left over from past construction currently occupy the proposed site.

"For a number of years, Columbia had an option on the site," but withdrew from it in 2009, Facey said. Since then, the administration has been in talks with elected officials and community board members about turning it into a residential space.

The development, designed with realtor Equity Residential, will rise at most 145 feet—no higher than the cathedral's eave line.

"We've protected most of the viewsheds," Facey said, referring to the sightlines of the cathedral, including those looking down Amsterdam and Morningside.

"We've just begun the schematic design process," Facey said. "We're about a year, year and a half away from being ready to go" with construction. A public community forum on the development will be held in early February. [Update: The community forum has been scheduled for 6:30 p.m. on Feb. 21. It will be held at Synod Hall, on the cathedral grounds at 110th Street and Amsterdam Avenue].

Facey said the development would be beneficial for the northern section of the cathedral grounds, also known as the close.

"Right now, the north side is like a brownfield," Facey said. "We're not tearing down any buildings. It's not going to be a negative, it's going to improve it."

In a statement to Community Board 9, Dietrich called the proposal "grossly inappropriate from urban planning, historic preservation, and religious charitable institutional perspectives."

The development could be prevented, Dietrich said, if the cathedral grounds were designated a historic landmark by the city's Landmarks Preservation Commission. According to Dietrich, the close has been under review by the LPC since the 1980s.

In 2003, the LPC agreed to exempt two sections of the grounds from becoming historic landmarks, public records show—as long as the cathedral agreed that any new buildings in those sections would not exceed a certain height and square footage.

Avalon now stands in one of those exempted sections, and the new development is planned for the other one. Facey said the cathedral has the right to build in that section, as long as the LPC does not declare it historic first.

"We have both supported and encouraged the landmarking of the historic buildings on the close," Facey said.

Dietrich said "it's enormously frustrating" that no progress has been made on designating the grounds as a landmark after suggestions by the LPC a year ago that there was some momentum.

LPC spokesperson Elisabeth de Bourbon said that both the cathedral and its grounds "remain under active review" by the LPC, but declined to comment further.

Facey said that the development is necessary to support the cathedral financially.

"You can imagine, with a 11.5-acre site and six major buildings, the cost of maintaining them," Facey said. "We have a small organized congregation here but not a huge funding base that a parish church might have."

The economic recession had a significant impact on St. John's. "We did a major downsizing, laid off staff, had salary cuts," Facey said. "We still ran a pretty substantial deficit last year."

Revenue from the real estate deals will also be put towards preserving the close.

"Part of this effort on the real estate initiative is not only to stabilize our finances but also to really take care of what we already have," Facey said. "We have done a substantial amount based on the southeast project [Avalon] to fund preservation and conservation on the close but there's a backlog of preservation and maintenance work on the building."

Some visitors to the cathedral on Thursday said they were uncomfortable with the idea of a development on the grounds. Maria Prieto and Freddy Lafonte, who were visiting New York from Colombia, said they thought the cathedral was monumental.

"It's amazing, huge, really impressive," Prieto said. "I think it would be less nice" with a development next door.

But Gregory Floyd, who works nearby, said he didn't have a problem with the idea of a development.

"There's nothing going on over there right now but a parking lot," he said. "I'm okay with it, as long as the residents are respectful, living next to a church."