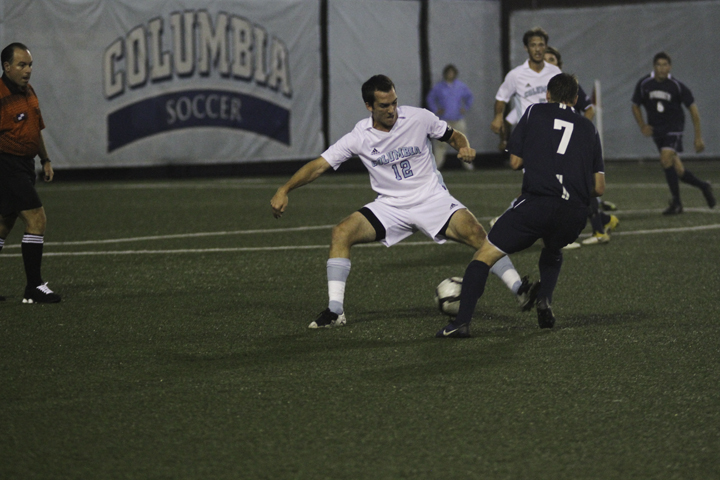 Senior Mike Mazzullo finished his last season as a Lion with four goals, five assists, and 13 points including two-game winners.

In the 2006 FIFA World Cup, German soccer star Bastian Schweinsteiger played a free kick short to his teammate Torsten Frings in the game against Costa Rica. Frings scored a wonder goal as he drilled home a thunder strike from 30 yards to seal a 4-2 win for the Germans. "I know Torsten Frings—he's a legend," Columbia senior Mike Mazzullo said. "I remember the World Cup in 2006, he was in the midfield with Michael Ballack and had a phenomenal tournament, and is still a great player." Frings now plays for Toronto FC of Major League Soccer, and this week Mazzullo joins Frings on the training pitch in Canada. The first-ever three-time captain of the Light Blue men's soccer team made history last week by becoming the first Columbia soccer player ever to be drafted by an MLS franchise when the Canadian side picked him up in the league's supplemental draft. "I'm really excited but a little nervous energy because I don't really know exactly what to expect," Mazzullo said. "I miss my teammates here already, especially the senior class—I just have very fond memories of my time here—but I'm looking forward to the challenge. I can't wait to see the level of play and the caliber of the players." Junior winger Nick Scott, who led the team in assists in 2011, was thrilled for his former teammate. "He's probably the best captain I've ever played for, and he's one of my best mates," Scott said. "Everyone respects him—he always puts his neck on the line for the team. And I think he really deserves the opportunity he's got and I hope he makes the most of it. He works harder in practice than anyone I know, so I wasn't surprised to hear the news." "Mazz's opportunity is really a culmination of how much the entire program has grown over the last three years," head coach Kevin Anderson said. "When you're able to create an environment that's conducive to pushing guys and getting the best out of them every day, there will be rewards." Mazzullo's achievement is one of several accolades the Light Blue team has received in 2011-2012. The Lions came closer to the Ivy League title than on any other occasion in the past 18 years, and only missed out by a whisker—Brown and Dartmouth shared the crown with a 4-2-1 record while Columbia finished the season 4-1-2 in the conference. The Lions tied 1-1 with Cornell in Ithaca in the final game of the season—a win would have brought home the Ivy title. But their efforts did not go unnoticed. Six men's soccer players were recognized by the Ivy League as All-Ivy selections, and junior forward Will Stamatis, who scored six goals in 2011, received first team All-Ivy, NSCAA All-Region, and ECAC Division I All-Star honors. "They're great honors but it's the same thing we've been saying all season," Stamatis said. "I'm getting these awards because of all the hard work of my teammates. I was in a position to score those goals because everyone else was doing their jobs and performing really well. It's hopefully a good sign of things to come in the future. Next year we'll be pushing for even more and I think we have the power and ability to do it." The ECAC All-Star honor is a tremendous achievement, and several of the senior honorees named with Stamatis have been drafted to the MLS this month. "Obviously Will had a good season," Anderson said. "I'm extremely happy that his play and his academics are at the same standard. This is more than just winning one game, and Will is a good example of that for our younger players and returning players. Everything that he does really sets a high standard." In addition, the Lions' assistant coach from 2008 onwards, Tommy McMenemy, CC '04, was recently appointed the top assistant coach at the University of Michigan—a high-ranked team in the Big Ten. Many players have been with McMenemy for their entire college careers. "Tommy recruited me," Scott said. "He came over to England and watched me play. I've always had a strong relationship with him because of that and so I'm very thankful to him for the opportunity to come here. He's a left-winger as well and did great things for Columbia so I've always looked up to him like an idol." "I'm sad to see him go obviously because I have such a strong connection with [him], but I'm also really happy for the chance that he's got to go to Michigan and further his coaching career," Scott added. However, it is another sign of the progress made by the Lions in recent years. "Michigan's is one of the top athletic departments in the country—the football team just won the Sugar Bowl," Anderson said. "It's a by-product of an atmosphere where the players and coaches are pushing themselves to be better and achieve cumulative group success. We're trying to promote not only our program, but also the people within it." McMenemy's is not the only departure of note moving into 2012, as the Lions will be losing seven seniors to graduation. "It's definitely going to be a transition for the team because they lose a lot of seniors—but with the loss of so many players comes the opportunity for the younger guys to step up on and off the field," Mazzullo said. There is a sense of belief among the younger players. "We're losing some good players but we do still have a strong core," Scott said. "We're not losing much offensively and there are people coming in with valuable playing experience and hopefully they can come in and make an immediate impact." "You saw how close we were last year, and the moment from the final whistle at Cornell will spur everyone ahead and be our motivation for the season," Scott added. "We're confident, and with a new assistant coach coming in it'll be exciting for us. I think we're going to be a top Ivy League team for years to come."