After a life in shelters, Vietnam vet now leads one

After a life in shelters, Vietnam vet now leads one 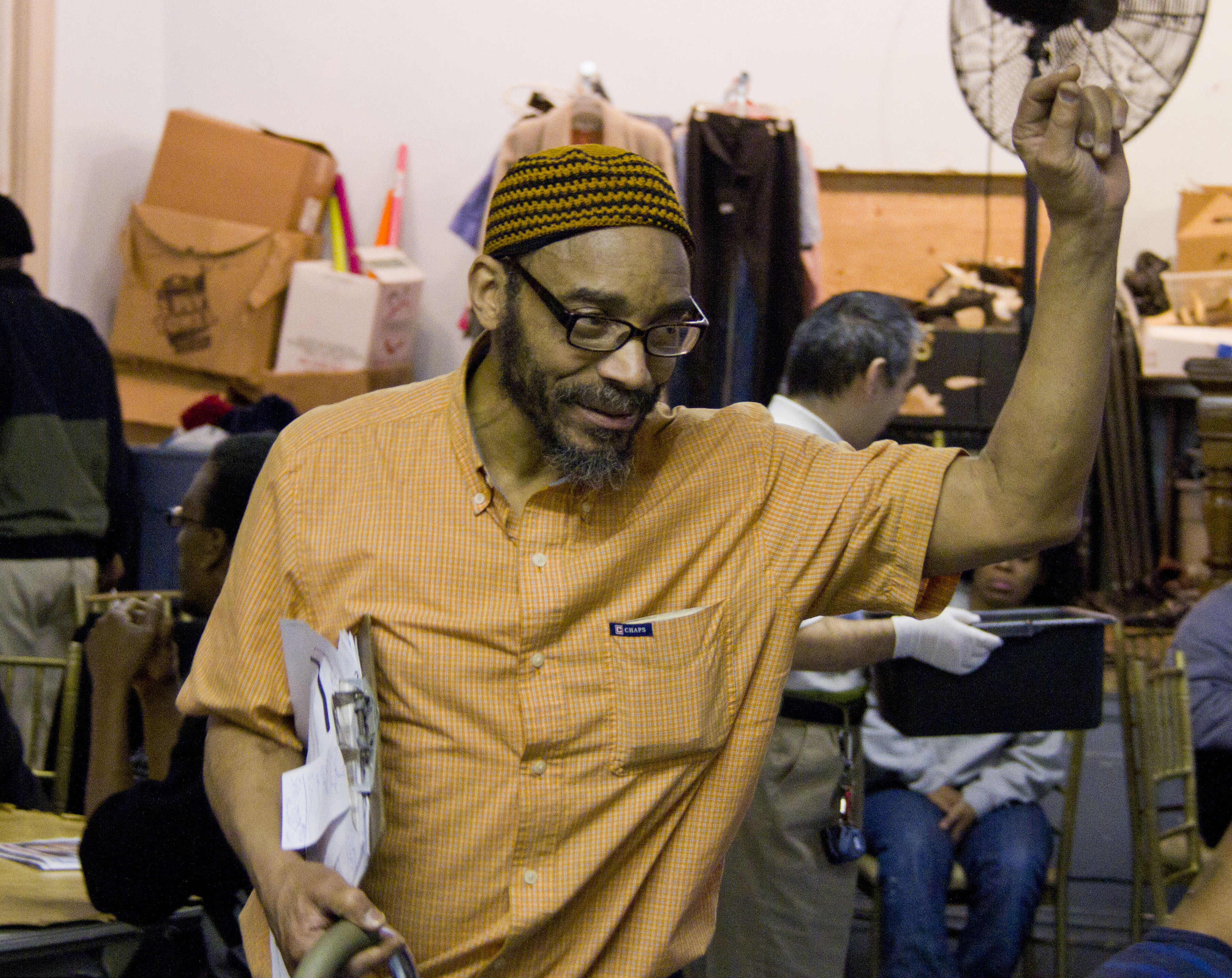 Throughout the 1970s, Hakim Rasheed lived in and out of homeless shelters. The Vietnam War veteran was incarcerated several times and has been in "almost every detox" program in the five boroughs.

"I slept in the streets, train tracks, rooftops, alleyways, subways—you name it, I've been there," he said. "You name the substance, I've tried it."

But he cleaned up his act, and now Rasheed, 64, works to help the homeless as the director of social services at a soup kitchen across from Lerner Hall.

Rasheed's story of turning his life around now inspires dozens at Broadway Community Inc., a soup kitchen and homeless support services center which operates within the Broadway Presbyterian Church at the corner of 114th Street and Broadway.

"He's a good man," said Arnold Urquila, a student in the Foodservice and Nutrition Training Awareness Project, a culinary training course offered by the soup kitchen. Urquila has been a "guest"—the term the BCI directors use to refer to those who make use of their services—for almost three years.

"He's wise, street-wise, because he comes from the streets," Urquila said. "He was homeless, and he could relate to people that come to the center here."

As director of social services, Rasheed has confronted a variety of issues when dealing with his guests, related to housing, entitlements, ID and documentation, mental illness, family problems, and immigration. He said that some guests struggle to communicate their problems because of language barriers.

"By their misarticulating, they wind up in an embarrassing situation so they need a mouthpiece," he said.
But because he's been in their shoes, Rasheed feels he can lend a hand. "They need someone who can articulate their entire situation properly so they can get the right help."

TOUGH GUY
Rasheed is no stranger to the issues he faces on a day-to-day basis at BCI. His past is marked by substance abuse and several crimes, including armed robbery and assault with a deadly weapon.

Still, he says he has no problem sharing his story. "My life is an open book. I don't hide anything that I have done."

After sleeping in shelters at the Cathedral of St. John the Divine and the All Angels' Church, Rasheed finally made his way to BCI in the 1980s. At the time, the organization consisted of only a soup kitchen and a substance recovery program.

Since he assumed the role of director of social services five years ago, Rasheed has neither missed a day of work nor taken time off for vacation. He shows up to work five days a week at around 8:30 a.m. and leaves at around 5 p.m.

Rasheed doesn't sugarcoat things. He can be blunt—while giving the guests a motivational speech on Wednesday, he promised to throw out one guest who interrupted him multiple times.

Chef Michael Ennes, who runs the soup kitchen, said that guests can sometimes be put off by Rasheed's personality, but his toughness enables him to deal with individuals who "deal with city bureaucracy and the welfare bureaucracy" very effectively.

"They don't give it out for nothing," Ennes said of the city's willingness to dole out resources to the homeless. Rasheed "really performs that role well of fighting for people to get things for us," Ennes said.

GETTING RESULTS
Those who know him said that beneath the tough exterior, Rasheed cares deeply for his guests.

He spoke fondly of one of his guests who passed away recently, nicknamed "Hot Sauce" for his hot sauce business. According to Rasheed, the guest had only six weeks to live due to cancer, but his application for money to fund his housing was rejected.

Impersonating somebody else in order to get the commissioner of the Department of Homeless Services on the phone, Rasheed says he gave an impassioned plea and convinced him to give Hot Sauce another chance.

In his five years at director, he always comes through for his guests—that is, unless they don't listen to him.

"That's the only time that I have not been successful since I've been here—is when a client is lazy and don't do their footwork," he said.

Bronx native Imani Grace said Rasheed has been an invaluable advocate for her since a fire in 2007 forced her to relocate to a hotel room.

"He stepped right in," Grace said. "He was very effective. When he was first able to speak to the people, they told me what I needed to do was gather all the information to the doctors and the social workers, and I did all that, and then they rejected me. They didn't want to give it to me. So I spoke to him. He gave me courage."

One year later, she found the soup kitchen, and she's been a regular visitor ever since.

Texas native Lucious Conway currently lives in Praxis, single-room occupancy housing for people with HIV or AIDS. His first time at the soup kitchen was this Monday, but he's already been struck by Rasheed's willingness to help him.

"Hakim was thoughtful enough on one particular day to help me out because I didn't have any food in my room at the SRO, and he gave the referral to here," he said.

Beyond caring for the guests, Rasheed is "good for recovery," BCI guest Matthew Wilson said.

"Sometimes I think about getting high, and I go and talk to him and stuff like that," he said. "He has a way of convincing me that it's not even worth it to even start getting high."

Michael Isaacs, a resident of a Wards Island shelter who has been coming to the soup kitchen for seven years now, said that Rasheed goes out of his way to support the guests' creative pursuits, too.

"One time we were doing a Shakespeare play here on stage, and he was nice enough to stay and be the only person in the audience watching us," Isaacs said.

REACHING OUT
Wednesday afternoon, Rasheed gave his weekly motivational speech—the "Wednesday Hour of Power"—in which he discussed empowerment and encouraged the guests to take responsibility for their actions.

"Silence, listening, remembering, understanding, judgment, and action," he told the audience. "Empower means to enable yourself, your group, your company, your organization, or your society, to put yourself in a position to do something."

He concluded his speech with a request that the guests follow their conscience.

"So what I want to say to you and I hope you keep in mind, the key is empowerment," he said. "The key is knowledge. The key is you. That means the program is you. You don't have to do anything. In fact, we insist that you don't do nothing unless yourself suggests that you do it."

Jamal Williams, who has been a guest at BCI for around two years, said that the speech gave him courage.

"It's a very intellectual, straight-to-the-point, valid information that he has to offer," he said. "It's a great thing that he does on Wednesdays."

Rasheed also works closely with Columbia's Student Health Outreach Program, a Community Impact program that helps people get access to health insurance, food stamps, and other public benefits, and with Advocacy Coalition, which provides referrals for benefits to homeless and low-income clients.

Community Impact provides funding for some of BCI's programs and covers insurance for the organization as well.

Rasheed provides training sessions for the two groups along with Katy Saintil, the senior program coordinator at Community Impact who provides oversight for both groups.

"When I think of Hakim, I think of a resource center, because to me he represents, to some extent, the face of service or the best outcome, because he is someone from the community who understands the community, who genuinely cares," Saintil said.

Colleen Shaffer, CC '12 and lead coordinator for Advocacy Coalition, said that the group sees him as an expert on homeless and low-income individuals. One time, she said, Rasheed attempted to communicate with an individual that approached her table who could only speak Russian and Polish.

"I will make him talk to me in English," she remembered him saying.

Sandy Helling, associate director of Community Impact and co-president of BCI's board of directors, said Rasheed tries to cater his services to individual needs.

"He does approach each of the participants at the site very individualistically in terms of what their situation is, what they need, and kind of walks alongside of the person to make sure that they obtain these services and government benefits," she said.

Rasheed said when he first arrived at BCI, he was placed in good hands. Now, he wants to return the favor.