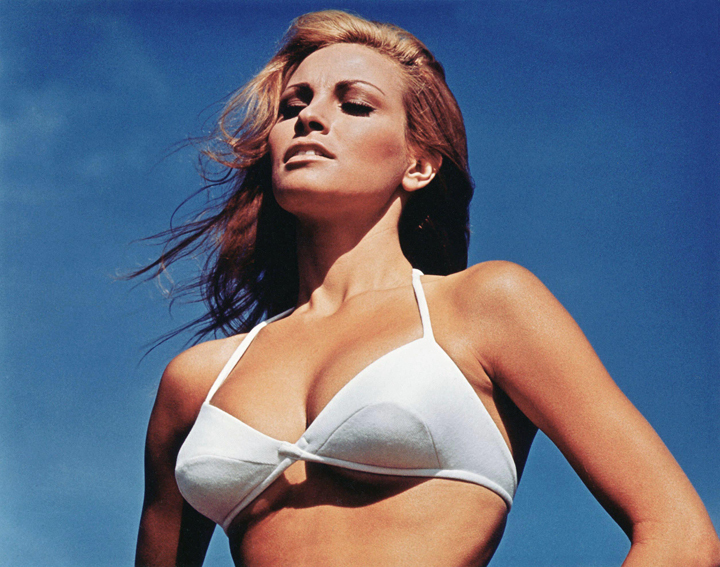 Lincoln Film Society celebrates the work of Raquel Welch, the definitive 1960s sex symbol, with screenings from her extensive oeuvre, including One Million Years, B.C. and Fantastic Voyage.

But beyond stirring adolescent fantasies, Welch's appeal neutralizes the controversial politics of sexuality present in her films. She recalls a goddess not merely through her looks but also by transcending mores without offending the mainstream.

Welch's retrospective runs at Lincoln Center (65th St. and Broadway) from Feb. 10 to 14. Ten films will be screened, including "Fantastic Voyage," which follows shrunken Soviet scientists through the body of their coma-stricken colleague, and "One Million Years, B.C.," a prehistoric tale most famous for its cover-shot of Welch in a fur bikini.

Welch herself will be present at some of the screenings—the full schedule is available online.

In "100 Rifles," Raquel plays a revolutionary Native American named Sarita who unites with Yaqui Joe (Burt Reynolds) and the lawman Lyedecker (Jim Brown) to defeat the violently oppressive local government. While the film's narrative trajectory and bifurcated morality are prototypically western, its politics set it apart.

For starters, the film is set in Mexico. All of the sympathetic characters are revolutionaries, not establishment figures. They aren't white, either. There is only one Caucasian American, and he's a meek railroad executive who watches his town's indigenous population get slaughtered. The real heroes are the black Lyedecker and the Native American Sarita.

One of the film's most poignant moments features an interracial sex scene between Welch and Brown. As the sex symbol of her era, Welch makes this statement powerful. Not only does the scene challenge Hollywood's long-standing desexualization of black characters—it does so by allowing Brown's character to enact the fantasies of countless American men.

Welch's sexuality is again politicized in "The Three Musketeers" as Constance, but unfortunately her role is second to the less charming D'Artagnan. Constance is a favorite of the Queen of England—she is also married to an older man who makes little effort to satisfy her. The film follows her and the queen as they search for extramarital fulfillment.

In order to avoid a war with France, Constance charges D'Artagnan with protecting the queen's secrecy, and he is rewarded when she falls for him. The movie is full of slapstick, but underlying the bawdy humor and basal plot is a progressive assertion that these women need not remain faithful to men who do not try to please them.

This is why Welch is fascinating. On one hand, she helped fashion a breast-worshipping American cult of the plastic female. Feminists are still fighting to cast off the coil of objectification wrought by icons like her. On the other hand, she subverted racial and gender conventions with aplomb. She is a sex symbol, sure—but she's human.

Tickets are $9 with CUID, $32 for a four-film package. Schedule available online at www.filminc.com.