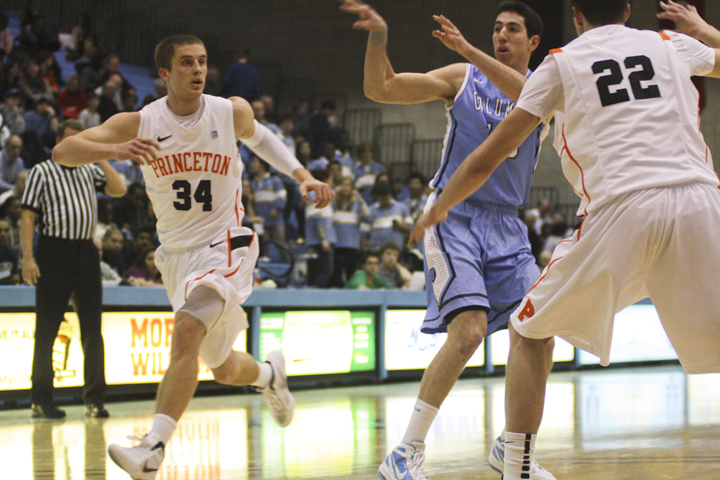 Princeton junior forward Ian Hummer leads the Tigers in scoring, and his physicality poses a major challenge for the Lions' post players.

Last year, Princeton stunned the sporting world as it almost took out national powerhouse Kentucky in the first round of the NCAA tournament. Then-sophomore forward Ian Hummer led the Tigers by hauling in eight rebounds and scoring 11 points to help keep Princeton's March Madness hopes alive until the final seconds. "We were only a few seconds away from knocking off Kentucky. With the loss of three key seniors, we knew we would have a lot of work to do this season," Hummer said. In the first part of the season it looked like Princeton (13-10, 4-3 Ivy) wouldn't be able to replicate its 2010-2011 magic, but Princeton turned heads again last Saturday by taking out another national powerhouse, No. 25 Harvard, 70-62. "We didn't go in thinking we had to beat a top 25 team—instead we came in thinking we had to beat Harvard, one of our biggest rivals," Hummer said. "Even though we have dropped a few games, we know there is still a chance to make a run in the league. It is going to be hard, but I think we are playing the kind of basketball that can make that possible." Not only did Princeton play one of its best games of the season against Harvard, but Hummer also surpassed his performance against Kentucky and established himself as one of the top big men in the league. After being limited to just four points against Dartmouth the day before, the 6-foot-7 forward bounced back quickly by scoring 20 points and snagging nine rebounds against the Crimson. "While leading the game in scoring was just icing on the cake, the fact that we were able to beat Harvard was by far the biggest accomplishment of the night," Hummer said. Even though Hummer does not stand as the tallest member of the Princeton squad, he may be one of the most physical players that the Lions will face as he leads the Tigers in both scoring (16.7 points per game) and rebounding (7.7 rebounds per game). "He's a physical beast. If you are not ready to fight, he will take your heart," Columbia men's basketball head coach Kyle Smith said. However, Hummer has developed a new move to complement his already impressive inside game. In his first two years playing for the Tigers, Hummer attempted no three-point shots. This year, Hummer has gone 15-48 from beyond the arc, putting up a respectable 31.3 field goal percentage for the season. While his newfound sharpshooting has not and will not replace his inside game, it offers an extra layer of stress for the Lions in Friday's game. "Any time you can add something to your array of moves and skills is always a plus. Adding a three-pointer this season has opened up a lot of other things," Hummer said. "It has opened up driving lanes as well as passing lanes. This has made it easier for me to score and get my teammates involved." The Tigers will hope that Hummer's game opens up more so that he can improve on his 11-point performance in their first matchup against the Lions this season. "I think the biggest thing that I need to improve is the amount of personal fouls. In our first game against [Columbia] this season, fouls limited my play and I had a hard time getting into the flow of the game," Hummer said. Hummer has shown that he can play against national-caliber talent, and as the Lions look to win their rematch against the Tigers, Hummer will present a unique challenge for the Light Blue. "You can try to wipe out the rest of the team, but then he'll get 40 points," Smith said.