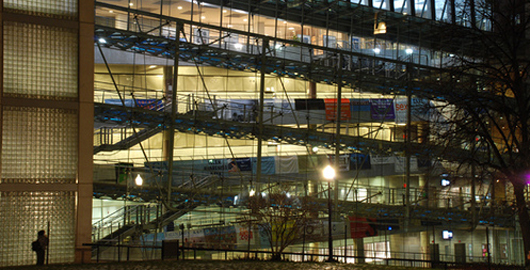 Administrators voiced support for adding more student spaces, including a kitchen and gaming system, in Lerner Hall on Wednesday. Organizers of the Student Space Initiative presented plans to reconfigure and refurnish Lerner's Broadway Room and Piano Lounge at a meeting with administrators, Barry Weinberg, CC '12 and an organizer of the initiative, said. The plans include adding a kitchen and gaming systems to the Broadway Room, and a stage, new door, speakers, and new furniture in the Piano Lounge. Columbia College Interim Dean James Valentini, Dean of Student Affairs Kevin Shollenberger, and Dean of Community Development and Multicultural Affairs Terry Martinez pledged to take care of administrative and financial aspects of new student spaces in response to a push from the Student Space Initiative, according to Weinberg. Weinberg said that the initiative's members would work with Facilities and would also seek more student input, including hosting two or three town halls, before going ahead with the renovations. "I was told, 'You don't have to worry about the money, and you don't have to worry about how to work out dealing with different administrative departments,'" Weinberg said. "What they've indicated is that they're willing to be a partner to address this need." Logan Donovan, SEAS '13 and one of the initiative's organizers, said she believes the University's lack of student spaces may contribute to a sense of isolation. "Lerner is more of a student and administrative building than a student union," Donovan said. "The small amount of space like the Piano Lounge we do have are used a lot, and we need more places where students can come together." She said the new layout in the Piano Lounge, which would include more lightweight, moveable furniture, would make it more of a social space than the current layout. Donovan noted that members of the initiative would have to study the impact of the renovations on groups who currently use the Broadway Room, including dance groups and the Office of Disability Services. Weinberg emphasized that the process would remain open and transparent. "This only came about because of the process, the fact that it was open to anyone," Weinberg said. "The fact that it was not a top-down initiative was crucial." Conan Cassidy, CC '14, who drew up the plans for the space which the initiative presented at the meeting, noted that it was just a prototype and that the new student space wouldn't necessarily be in the Broadway Room and Piano Lounge. He believes support for the initiative is nearly universal among students. "The point of this project is to bring a student space to a building that is supposed to be a student space," Cassidy said. "It builds community. It builds wellness. It does all those thing you would hope for in a student lounge." Yanyi Luo, CC '13, and Hannah D'Apice, CC '12, a Spectator editorial board member and former design editor and staff director, are the other organizers of the initiative. ben.gittelson@columbiaspectator.com