Teaching and research at Columbia

Teaching and research at Columbia 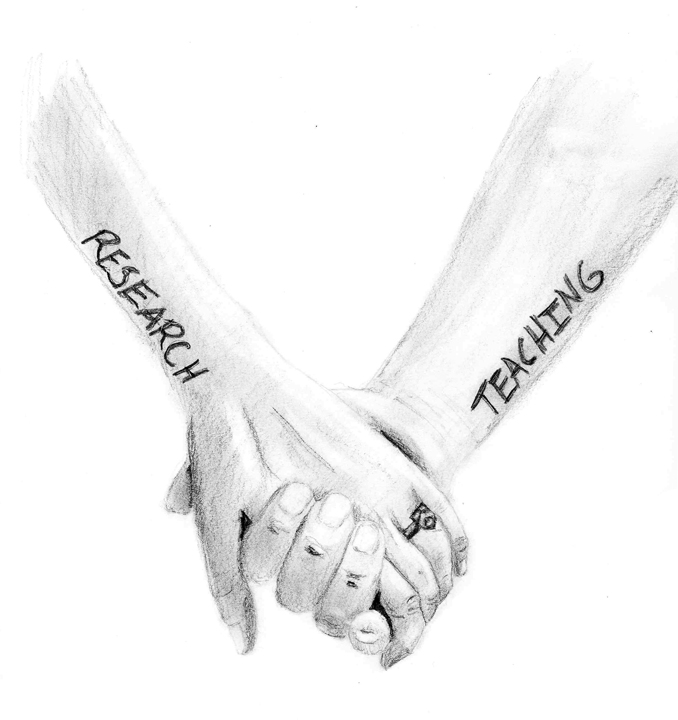 Reading some of the articles, opinion pieces, and public interventions that have commented on the status of Columbia College since the events of last summer, I have noted the consistent mobilization of a dichotomy that refers to a supposed rift between the teaching and research activities of Columbia's faculty. One such article, for instance, referred to the Policy and Planning Committee of the Faculty of Arts and Sciences as composed of "nine research faculty," which obscures the fact that all nine members of the PPC—just like all faculty members at the University—have substantial teaching responsibilities that include undergraduate courses. In fact, the typical teaching load of most faculty members at Columbia is one graduate seminar and three undergraduate courses, and even if that ratio may vary in any given department, no faculty member currently has an appointment at Columbia that does not involve undergraduate teaching or advising. For example, although I am currently dean of the Graduate School of Arts and Sciences, I served for four years as director of undergraduate studies of my department and for three years as director of undergraduate studies at the Institute for Comparative Literature and Society, all while teaching both graduate and undergraduate courses. What, then, gives rise to and sustains the stubborn teaching-research, undergraduate-graduate dichotomy among some students, faculty, and alumni at Columbia?

To be fair, there is a historical dimension to this impression. There was a time when Columbia College and the Graduate Faculties (as they were once called) hired separate faculty and essentially lived parallel lives. It is almost predictable that in a situation in which the teaching and the research functions of the University were divorced, teaching would have acquired second-class status. Hence, it is understandable that until 20 years ago or so, a graduate of Columbia College would have felt that the undergraduate dimension of the University was not being given its due.

But I would argue that the current perception that the opposition is still with us arises from the evident fact that not all members of the faculty are involved in teaching the courses that constitute the Core Curriculum, which leads students and alumni to think that those faculty must care more about their research, because if they cared about the Core they would be teaching a class in it. This way of thinking eludes one extremely important reality: Columbia College is not just the Core Curriculum. Columbia College is the Core, of course, but is also the undergraduate majors that round out and complete the intellectual formation of our students. Departments need some of their faculty to teach the courses that constitute the major and concentration requirements, and are constantly weighing those needs alongside the demands of the Core for instructors to mount its courses. Therefore—and this is important to underscore—teaching in the Core is not losing out to research, if at all, but to other teaching needs that are as important both to students and to departments.

Columbia paid dearly in the past for the imbalance that it allowed to take hold between its teaching and research enterprises, for the reputation of a modern university is based simultaneously and inextricably on the strength of both its undergraduate and graduate components. Any administration that would sacrifice one to the other, or that would favor one over the other, would be judged a failure. The annual US News & World Report undergraduate rankings are complemented and amplified by the decennial National Research Council Assessment of Research-Doctorate Programs. Great universities and their administrations must be mindful of both kinds of standings.

But precisely because both dimensions have to be advanced simultaneously, there has to be coordination and mobilization of resources in a way that allows for the pursuit of quality on all fronts at once. Such a context requires a centralized deliberative structure of faculty and administrators that can harness the resources of all the schools and distribute them in a manner that ensures that they are, in the aggregate, supporting all academic functions adequately.

Through the creation of the Faculty of Arts and Sciences in 1991, Columbia attempted precisely to close the chasm between its two fundamental enterprises of teaching and research. Since that time, a large investment of resources has been made in Columbia College, which, combined with the considerable contributions and engagement of Columbia College's alumni, have helped turn Columbia College into the strong and ultra-competitive entity that it is today. But the guarantee that Columbia College will continue to be a signal constituent of Columbia's reputation does not lie in demanding that Columbia College become or remain autonomous from the rest of Arts and Sciences or the University. The demand that every dollar that Columbia College collects on endowment returns, tuition, or gifts be invested in Columbia College—instead of being used even partially to finance the "research" component of the University—is pernicious for a number of reasons. First, it keeps alive the anachronistic, zero-sum dichotomy that sees the two enterprises of the University as divorced from one another. Second, the College simply would not be able to survive financially without the significant help that it currently receives from other sources of income in the Arts and Sciences: The revenue produced by master's programs, the School of Continuing Education, the School of General Studies, the Arts and Sciences endowment, etc. Columbia College has never been a self-sustaining island financially and it never will be—but most importantly, neither are the other schools which are subsumed under Arts and Sciences. The ultimate reality is that we are all dependent on one another to thrive, and fostering fantasies of untrammeled autonomy distorts that interdependent reality. When Columbia hires a world-renowned historian from another institution, the history major is strengthened, the department's professional standing is raised, and the University's reputation overall is enhanced. This faculty member may not teach in the Core necessarily, but characterizing such a hire as signaling a lack of commitment to undergraduate education obviates the many other ways in which it enhances the undergraduate environment.

A university must balance competing interests, recognizing that if any of those interests wither, the entire institution is weakened. This knowledge of the mutual imbrication of all of the University's components—perhaps especially including those that are most unfamiliar to us—should be the guiding principle for all of Columbia's constituencies. Our individual experience and time at this university may be limited to a school or a department, yet we must train ourselves to transcend our circumscribed personal experience of the institution if we are to be its strongest stewards and supporters.

The author is the dean of the Graduate School of Arts and Sciences, and the Morris A. and Alma Schapiro Professor in the Humanities.