Columbia's defense unravels in second half as it falls to Princeton

Columbia's defense unravels in second half as it falls to Princeton 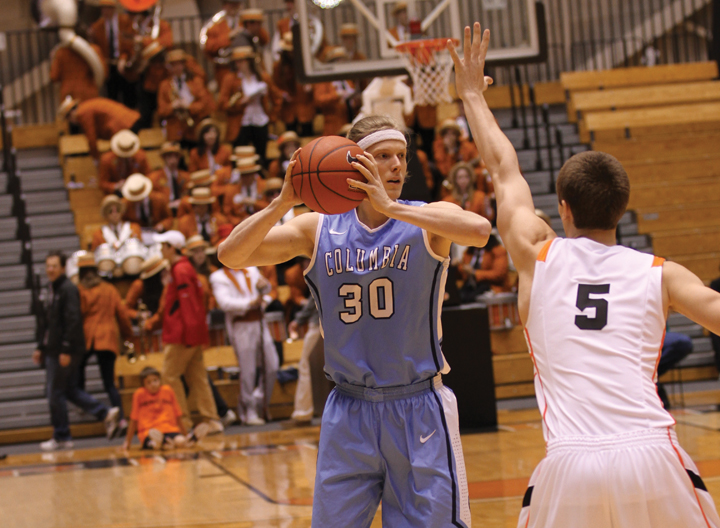 PRINCETON, N.J.—Second-half defense was once again the downfall of the Columbia men's basketball team on Friday night in Jadwin Gymnasium. As has become increasingly familiar, the Lions (14-12, 3-7 Ivy) allowed Princeton (15-10, 6-3 Ivy) to pull away with the lead midway through the second period, ultimately leading to the Light Blue's defeat, 77-66. "We couldn't get enough stops," junior point guard Brian Barbour said. "I think it all came down to defense." The score was tied at 27 to start the second half, and after scoring on their first possession, the Lions held a slim lead for several minutes. But the momentum shifted in the Tigers' favor when a jumper by senior guard Douglas Davis and a three-pointer by junior forward Mack Darrow put Princeton ahead 42-39 with 12:22 remaining. Things quickly spiraled out of the Light Blue's control as Davis' shot sparked a 14-3 run by the Tigers, who pushed the margin as high as 13 before the end of the game. One of the biggest contributors to the Tigers' second-half surge was junior forward Ian Hummer, who finished with 16 points and eight rebounds. Light Blue senior forward Blaise Staab—who started for the first time since November—limited Hummer to only two field goals in the first half but was unable to contain Princeton's leading scorer in the second. The Light Blue was also troubled by Davis' quick perimeter shooting, which earned him a team-high 20 points. "Davis hurt us," head coach Kyle Smith said. "Brian is usually one of the better defenders on a guy like that. I told Brian, 'I'll take you against any of those guys anytime,' and he got the better of him tonight." Apart from Barbour, who had a game-high 22 points, Columbia's usual stars were uncharacteristically quiet on the offensive end. Staab contributed 12 points and six rebounds, but he was the most productive member of the Light Blue frontcourt, as junior center Mark Cisco only had three shots and five rebounds in his 28 minutes on the court. While Smith attributed Cisco's below-average performance to Princeton's double-teaming, there was a bigger problem for the Lions' big man. "Mark feeds off getting offensive boards," Smith said. "It's a big part of his game, and they outrebounded us, which is probably the most disappointing part, because they struggle to rebound the ball." Rebounding has been the strong point of the Lions' game. But on Friday, Princeton outrebounded them 30-25, marking the first time this year an Ivy League opponent has beaten Columbia on the boards. The rebounds hurt the Lions the most in the final 10 minutes, when Columbia's efforts to quicken the pace of play and cut down the margin were hindered by Princeton's drawn-out possessions. "We can't give up offensive rebounds, because playing against a team like Princeton, who really slows it down and wants to run their offense—giving them offensive rebounds just kind of plays into their hands, where you had to guard for another 35 seconds," Barbour said. The loss was especially frustrating for the Light Blue because the entire first half was an evenly matched battle. Columbia even had the chance to go into the break with a five-point lead, but a steal and a three-pointer by Darrow in the waning seconds tied it up. "I thought our offense was actually pretty good," Smith said. "It was good enough to win. We're on the road, we got pretty good shots ... We just couldn't follow up by getting a stop and getting a basket."