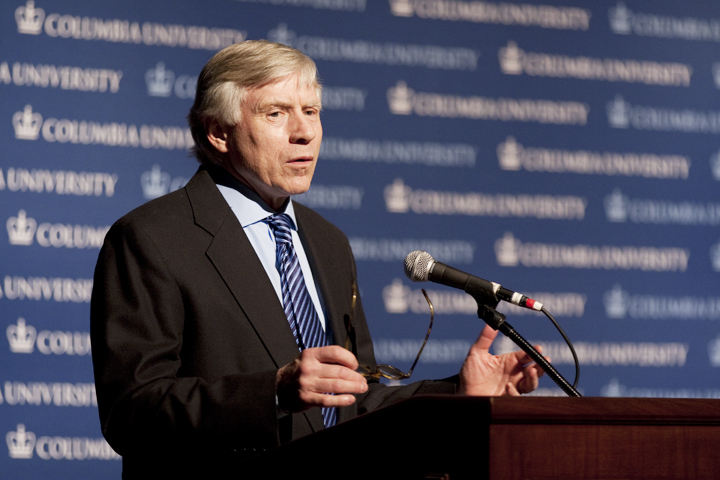 University President Lee Bollinger said that if race is eliminated as a potential factor in the admissions process, it will significantly change the face of higher education.

The U.S. Supreme Court has agreed to hear a case about affirmative action at universities, putting its landmark 2003 decision in Grutter v. Bollinger and Gratz v. Bollinger at risk of being overturned. In those two cases, which were argued together, the court held that affirmative action is constitutional, as long as admissions processes do not quantify the advantage given to particular minorities. The cases were brought against University President Lee Bollinger when he was president of the University of Michigan. Both the undergraduate college and the law school practiced race-based affirmative action under Bollinger. The Grutter case was awarded in Bollinger's and Michigan's favor, but he lost the Gratz case. Abigail Fisher, a white college student who was denied admission to the University of Texas, has brought the new case, Fisher v. University of Texas at Austin, before the court. Fisher claims that she was unfairly rejected from the university due to her race, and she is challenging its practice of using race as an unquantifiable—but significant—factor in the admissions process. The court will hear the case in October. Bollinger believes that if the 2003 decision is overturned and race is eliminated as a potential factor in the admissions process, it will significantly change the face of higher education. He told Spectator that the effects of such a decision would be "devastating," adding that they would apply not only to public institutions, but to all institutions that receive public funding, including Columbia. "It would be a national tragedy It would mean that you could no longer consider race or ethnicity, and that would mean a significant decline in racial and ethnic diversity," he said. The Fifth Circuit Court of Appeals upheld the University of Texas' admissions practices as legal last year, and Bollinger believes that the Supreme Court could be reviewing the lower court's decision for one of two reasons. Either the court wants to address the constitutionality of the specific admissions policy of the University of Texas—which admits the top 10 percent of all public high school students in the state—or the justices are interested in reviewing the practice of affirmative action as a whole, he said. "In general, courts respect precedent under the principle of stare decisis," Bollinger said. "But there are several instances of this particular majority overturning previous decisions." Experts believe the Supreme Court might be more hostile to affirmative action now than it was in 2003. In 2006, former President George W. Bush appointed Justice Samuel Alito Jr., who is seen as one of the court's most conservative justices, to replace Justice Sandra Day O'Connor. O'Connor wrote the majority decision in the 2003 cases, arguing that affirmative action is necessary to promote diversity among students in higher education. Columbia Law School professor Theodore Shaw, former president of the National Association for the Advancement of Colored People's Legal Defense and Educational Fund, served as lead counsel in the coalition that defended affirmative action in 2003. "This is a case that I think I would prefer not to see before the court," Shaw said. "I am concerned because this is a different Supreme Court—it is an even more conservative court, and the Grutter court was a conservative court." Bollinger said that while it's too early to speculate on what the court will decide, he is worried about what will happen if the justices ban affirmative action. "It would be a tragedy for all of higher education and I think for society generally," he said. margaret.mattes@columbiaspectator.com