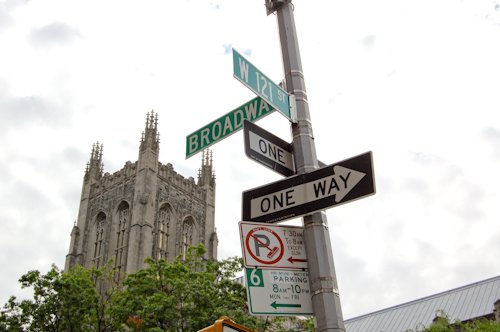 A petition to rename the block of 121st Street between Broadway and Amsterdam Avenue after George Carlin is meeting continued resistance from a local church.

George Carlin Way won't be coming to Morningside Heights—at least not yet. On Thursday evening, Community Board 9 members discussed the possibility of renaming the 500 block of West 121st Street after George Carlin, but they didn't reach a decision. Kevin Bartini, a stand-up comedian who started the petition to rename the block for Carlin, said that the gesture would commemorate "a quintessential New Yorker" and "an amazing, amazing man." Carlin, a renowned stand-up comedian who died in 2008, grew up on the block. Bartini, a writer at "The Daily Show with Jon Stewart," started collecting signatures for his petition over the summer, and last October, he met with members of the Corpus Christi Church, who opposed his efforts. Carlin "is known for his drug usage over the years, and we just don't feel that for kids that it sets a good example," Corpus Christi Church member Michael Hall said at Thursday night's meeting. "In addition, Mr. Carlin really lampooned the Christian faith, so we were offended by that." Advocates of the renaming have proposed compromising by hanging the street sign on Amsterdam Avenue, farther away from the church. "Unfortunately, Reverend [Raymond] Rafferty did not accept the compromise," Bartini said. "We have gone out of our way to come up with a compromise. We think that we can honor this man without it having to be right in front of Corpus Christi." Still, Hall said that students at Corpus Christi could be adversely affected by Carlin's legacy. "We just don't feel that for kids in pre-kindergarten through eighth grade that it sets a good example," he said. "As far as the compromise that was presented, the Corpus Christi community viewed that as still impacting and de facto naming the block after George Carlin." Hall argued that it would be possible for a different street to be named in honor of Carlin. Bartini, though, emphasized the connection between Carlin and the block, noting that Carlin's mother also lived there for over 40 years. "We can have a big public thing, but at the end of the day, the numbers are on our side," Bartini said. Assistant Secretary of CB9 Theodore Kovaleff said that he would be in favor of scheduling a town hall-style meeting for members of the community to voice their opinions, pointing out that many of the almost 9,000 signatures on the petition have come from outside of New York. "It looks to me that what is necessary is a community hearing," he said. "Very frankly, I'm not very interested in someone from Los Angeles's signature—I'm interested in representing my community." "As a comic, I don't see a downside to publicly debating George Carlin," Bartini said. "I just think that if they [Corpus Christi] don't want to raise George's profile to their children, then having this big thing is just going to invite that." CB9 plans to reopen discussion on the issue at its meeting in April. If the committee votes in favor of renaming the street, the City Council will make the final decision. jeremy.budd@columbiaspectator.com