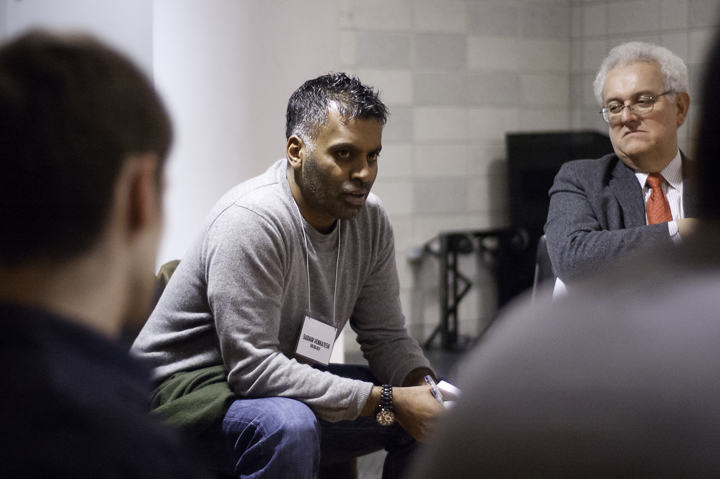 Undergraduate students and faculty members discussed issues of globalization, from Occupy Wall Street to the Arab Spring, at a discussion with members from the Committee on Global Thought on Monday night. The committee kept the hour unrestricted so as to solicit students' thoughts on what they believed the most pressing global issues were. In the Broadway Room in Lerner Hall, 30 students shared their ideas about how the global reverberation of the Occupy movements over the last six months shows how communication systems are evolving. Danny Alonso, CC '12, said that he thought it was especially important for students to address issues of solidarity and exclusion within the Occupy movement with a critical eye–especially since its protests were located all around the globe. "You saw the hiccups it had when it came to addressing difference," Alonso, who was an active participant in the protests here in New York, said. "When the forces of resistance came, there was a lot of silencing." Although the Occupy movements sought to critique inequality and hierarchy, there was still a hierarchy within the movement itself that excluded some people, Alonso said. But he criticized the fear of some participants who "didn't understand this different kind of critiquing" and advocated for a "global solidarity" through listening and more open communication. "It's an issue that a lot of people are having," he said. "We are more connected, we do have these routes and systems of communication, but like some people have said, they're very hierarchical and only some people have access to them." Saskia Sassen, a professor of sociology and co-chair of the committee, spoke about the issues of power and how Occupy protesters engage the powerless. "The question that I have is do the powerless make history under certain conditions, and do they do so without becoming empowered," she said. "I love empowerment—I adore it, but it's pretty rare." Katharina Pistor, a member of the committee and professor of law, responded by addressing the issue of communication and its role in shaping globalization. "We have mechanisms that link one another, through finance and information, et cetera, but we can't easily be uncoupled," she said. "So on Facebook you can easily defriend somebody, but in finance, you can't be quite easily defriended." Pistor also said that some countries may be locked into with relationships with one another, something that they may not have the governance structures to address. And while it is possible that some countries have little choice with which nations they interact, Julia Sclafani, CC '15, said that she was curious about how morality will factor into these interactions. "In discussing a lot of these events that have happened in past years, these new patterns that are coming about due to globalization, what ethical or moral frameworks might be coming into play," she said. "What kinds of responsibilities are on the moral plane?" Carol Gluck, a member of the committee and professor of history, said that French political activist and diplomat Stéphane Hessel inspired students when the Maison Française invited him to speak last spring, telling them to "become indignant" and more aware of the modern environments around them. "Modernity is not a condition that one can 'opt out of' in our global age," she said. "It works differently in places not only because of what's on the ground, but also because of these relationships between the global and local." "Daily lives are very much affected by this interplay, this interaction," she said. "I do care about a lot about the rest of the world and how it is modern in its ways." While the next discussion session for undergraduates has not yet been planned, Gluck said that she was eager to hear from more students. "We thought we would talk about which global issues engage you, things that concern you enough that you would actually want to do something for," she said. "It's your world, and you should take control of it—take charge of it. What do you care about?" jeremy.budd@columbiaspectator.com