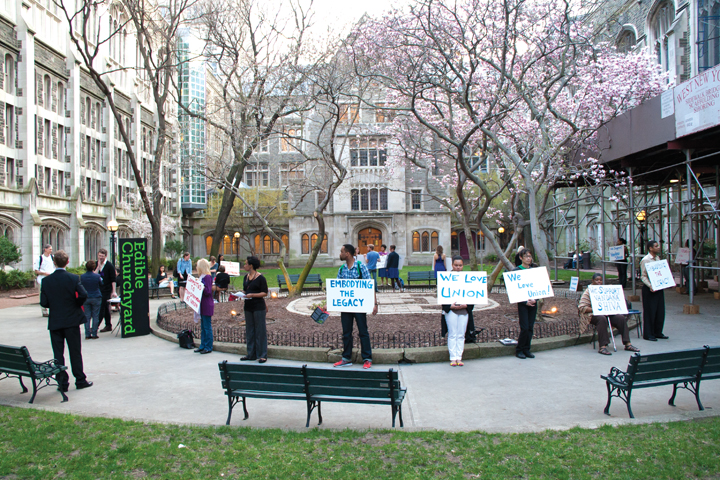 UTS students staged a silent protest on Thursday evening in the schools courtyard, calling on President Serene Jones to explain the reasoning behind her firing of a faculty member.

Students and faculty at Union Theological Seminary criticized UTS President Serene Jones on Thursday for her administration's handling of the recent firing of an administrator—what they called the latest on a long list of problems with the UTS administration. Jones fired Rev. Dionne Boissière, a womanist theologian scholar who was an associate director of development and alumni relations at UTS, earlier this month. At a community lunch on Thursday, Jones fielded questions from students and professors concerned about a perceived lack of transparency over the decision. Later, about 30 people held a silent protest outside a UTS lecture hall. "Union's reputation as the vanguard of progressive theological education is in danger," a flier given out at the silent protest read. "Our commitment to embody Union's prophetic legacy, forces us to faithfully and resolutely resist current practices taking place within our walls." Boissière was dismissed just days before a UTS womanist conference, "What Manner of Woman Is This? Womanists Making a Difference in the Academy, Church and Society," with which she was heavily involved. At the lunch on Thursday, the conversation focused largely on how the administration handled Boissière's firing after the fact, rather than why she was fired. Many attendees expressed anger and frustration at what they perceived as a lack of transparency, saying that Boissière was fired at an inopportune moment and that the administration had not told students and faculty why she was fired. Jones said that there was a reason Boissière was fired when she was, although she said she couldn't explain why. She acknowledged, though, that there had been a communication issue. "There was not a disregard for the effects of this decision," Jones said. "But there was no way not to make that decision." "This is an example of a moment when the administration failed to communicate quickly enough," she said. One student demanded to know why Jones had expressed "regret" in a written response to a letter from the UTS students when students had requested that she "apologize" for the anger the administration's decision had caused. In the meeting, Jones responded, "I apologize," saying that she had not been trying to make a distinction in her choice of words. Students also expressed more general concerns about the seminary's financial priorities. One student cited feelings of "fear and mistrust" between students and the administration. "I need to know more about what that [fear and mistrust] means," Jones said. "I want dialogue." Students participating in the silent protest did not respond to questions, but a flier they distributed read, "Although the morale and spirit of the Union body has been undermined by the culture of fear and intimidation perceived by many current students, staff, faculty, and alumni/ae, moving forward with a transparent process that engages all sectors of the Union community will help to ensure that this harm is not irreparable." At the lunch, UTS student Leslie Jackson spoke briefly before Jones did. He stressed that the lunch was about "people asking questions with compassion" and "not about attacking President Serene Jones," garnering applause. "This is not about destroying the Union administration or destroying the Board of Trustees," Jackson said. Jones said that she is forced to make difficult decisions, often because of financial concerns. "It's painful for everyone to be a part of what we're going through," she said. The UTS communications office and the students who organized the community lunch did not respond to requests for comment. margaret.mattes@columbiaspectator.com