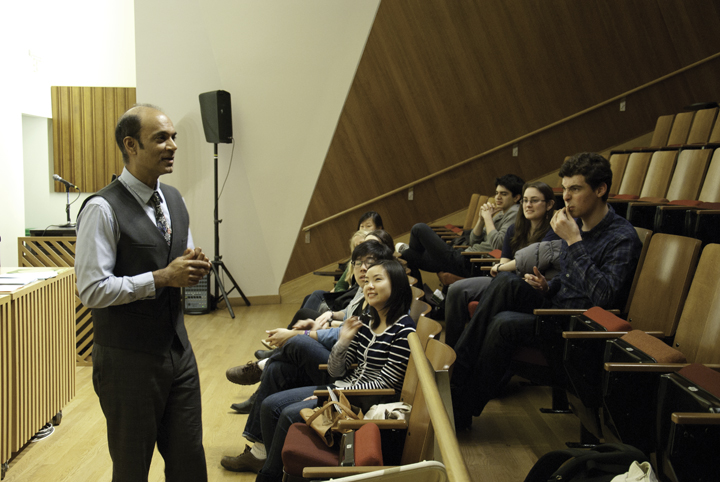 Dr. Andrew Hamid, a professor at the School of Social Work, speaks about trans-cultural issues on Wednesday as part of the first annual Mental Health Week.

Sixteen students stood in a circle on Monday night, clutching paper stars on which they had written the names of important people and goals in their lives. They were asked to role-play, pretending to be LGBTQ youth in the process of coming out to friends and family. "If you have a red star, tear it up and let the pieces fall to the ground. You are now part of the one-third of lesbian, gay, and bisexual young people who attempt suicide at least once," Jeffrey Fishberger said. The different colors represented the varying degrees of support LGBTQ youth receive, and students watched as they tore off the names of loved ones from their paper stars, emulating the experiences of those who are not accepted after coming out. Fishberger—who is the co-chair of the Program Committee for the Trevor Project, a New York City-based suicide hotline for LGBTQ youth—led the opening event of the Columbia Neuroscience Society's first Mental Health Awareness Week on Monday night. In the second half of the evening, other representatives from the Trevor Project ran a Lifeguard Workshop, which helped attendees discuss the warning signs of depression. "Our goal is to get people the help that they need," Assistant Dean of Community Development and Residential Programs Cristen Kromm said during the program. "There are so many people here successfully struggling with depression. They are not alone." The week's other events highlighted different aspects of mental health, including stress, cultural challenges, and the stigma attached to mental illness. Tuesday night featured a talk on stress and mental health as seen in the movie "Black Swan." Students watched the film and then discussed Natalie Portman's character's symptoms with Cheryl Corcoran, a professor of clinical psychiatry at the Columbia University Medical Center. At an event on Wednesday, three volunteers from the Fountain House—an organization that helps people with mental illness readjust to community life—shared their personal stories and fielded student questions. "For people who don't have mental health experiences, this can help them relate, and for people that are dealing with mental health issues, it can show them that there is hope, that there are ways to deal with it," Jessica Greenberg, CC '12 and co-president of CNS, said. The group has tabled on College Walk every afternoon this week, handing out flyers and brochures to promote the school's health resources. "We're reaching a lot of new people by tabling," Greenberg said. "The fact that people are talking about it, hearing about it, and becoming more aware and telling their friends—that's a great thing." Thursday night's event also aims to increase awareness through a discussion of the stigma surrounding mental illness, led by members of the campus group Respecting Ourselves and Others Through Education, or ROOTEd. "I'm looking forward to seeing how many people come out to our other events, and to seeing how many students get made aware of campus resources," Nathen Huang, CC '15 and a member of CNS, said. "I am excited to see how we can all bond over this issue and find common ground." abby.abrams@columbiaspectator.com