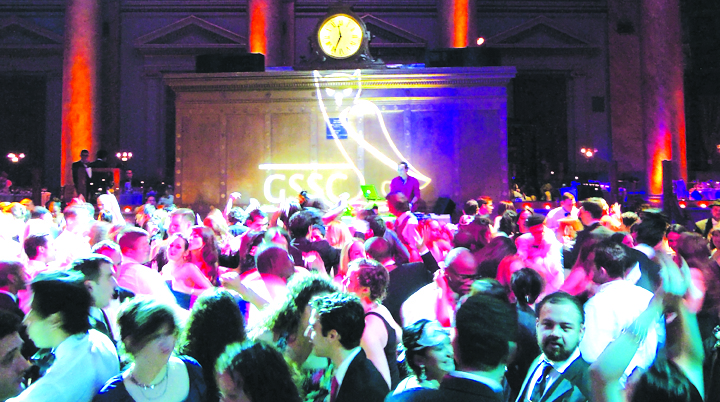 About 450 General Studies students packed the Capitale in SoHo on Saturday.

Among the masked faces at the ball, Erin O'Brien, GS '12, and her boyfriend Dustin Reyes stood out, dressed as characters from "The Phantom of the Opera." The couple spent two weeks creating outfits from the scene in which the Phantom appears at a masquerade ball. "I'm more of a girl version of the Phantom, in a way," O'Brien said. "Both characters are just extensions of our true selves," she said. O'Brien and Reyes were two of the 450 General Studies students and guests who packed the house on Saturday for their student council's largest event of the year, a Venetian gala held at Capitale in SoHo. GSSC hosts a gala event every year, but the 2012 GSSC Venetian Masquerade Gala is the biggest one it has ever hosted. The first 300 tickets sold out within two hours, according to Jacqueline Thong, GS '12 and GSSC president. In response to the demand, GSSC released a new batch of tickets, of which 50 were sold in less than two minutes. Over 50 venues were considered. The challenge, Thong said, was to find a venue that was both appropriate for the occasion and "something that could fit our very tight budget." "I'm blown away by this place," Andrew O'Connor, GS '12, said. "I expected a very high-end sort of event, and we certainly got it. This is extremely lovely," O'Brien said. Patrick Raftery, GS '16, was dressed in a tuxedo and skull mask. "When I first saw that it was Venetian masquerade I thought I was gonna wear a cape, a monocle, and a top hat. And then I saw the tickets, and it said 'black tie,' so I had to go get a tux. And then I found my skull mask," Raftery said. The committee brought a jazz trio of Manhattan School of Music students, a quartet of student woodwind players, and DJ Kelly Kellam, GS. The ballgoers flooded the dance floor as soon as Kellam began DJing, and the room was still crowded until the very last song played at midnight. "I danced my ass off," Zac Chen, GS '13, said. "I thought it was fantastic. I haven't had this much fun in quite some time." "Everyone is in a really good mood, everyone is bringing really positive energy, and we have an amazing venue. So, everything is really working out," Robbie LeDesma, GS '13, said. news@columbiaspectator.com