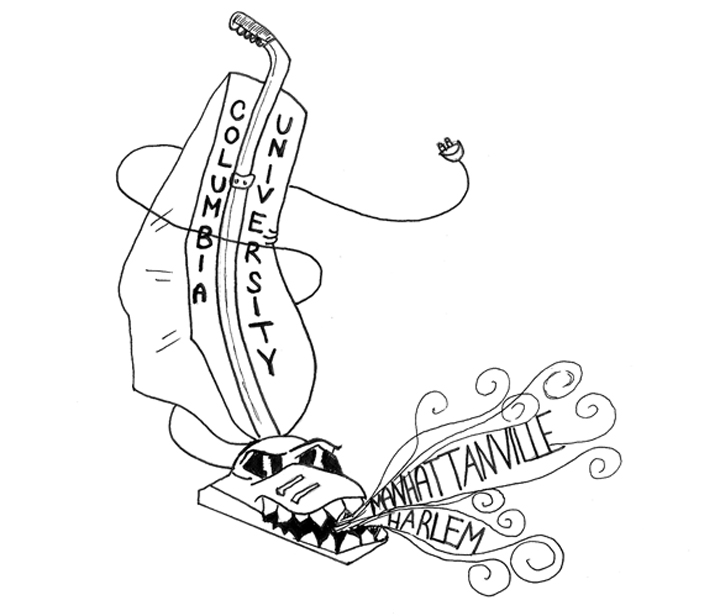 The past two weeks have witnessed a renewed engagement between students and labor-related struggles on and around campus. Whether supporting the clerical workers' struggle for a decent contract—which appears to be coming to a close, although negotiations continue at Teachers College and Barnard—or confronting the disjuncture between University rhetoric and reality in Manhattanville, students have been rebuilding connections both with workers on our campus and with members of the community left behind by Columbia's promises for Harlem. The International Union, United Automobile, Aerospace and Agricultural Implement Workers of America Local 2110's recent victory after months of frustrating negotiations with the University has reminded us that collaboration between students and workers has tremendous power to change our campus. We need to continue building these alliances in order to challenge the premises of the University's expansion. On the Manhattanville front, Columbia remains as stubborn as ever. Despite the death of a second worker on its property and renewed protest on and around campus—including the occupation of Tuck-it-Away Storage on 125th Street and last Monday's open forum about the expansion—the administration has felt no need to respond. Columbia has made no move to break with Breeze National, the construction company currently at work in Manhattanville. We cannot allow Columbia to excuse its poor labor practices by hiding behind the veil of subcontracted construction companies in Manhattanville, any more than we can allow them to rip off their workers on our present campus. Juan Ruiz's death is a dark reminder of what can happen when the University conducts its expansion without any standards of accountability to the community it is invading. It is symptomatic of far broader problems—an unsavory mélange of hollow rhetoric, lack of transparency, and feigned blindness to the deeper implications of the project, compounded by an exaggerated effort to "protect the bottom line." Every aspect of the expansion program so far has reflected the same hypocrisy. Take the West Harlem Local Development Corporation, responsible for allocating a whopping one percent of the expansion budget to the Manhattanville community under the "Community Benefits Agreement," which has been plagued from the start by a lack of transparency and community participation. Or take the official projections for "local job creation." President Bollinger himself admitted in an interview broadcast on PBS in 2007 that only about 30 percent would be filled by West Harlem residents—scarcely more than the 1,500 jobs currently provided by businesses in the area Columbia plans to build on, according to research conducted by Community Board 9. The gain in local jobs, then, will be negligible, while the uprooting of people has already had tangible effects. Meanwhile, Columbia promises to provide jobs at diverse skill levels, with "dependable health, educational, and retirement benefits." But as the labor dispute between the University and its clerical workers has revealed, Columbia is anything but committed to providing dependable benefits. Even if it has finally been brought to reason, the University's insistence on "austerity" over the past two months of negotiation has made its real goals clear. Moreover, this victory does not eliminate the wider threat to the West Harlem community and, consequently, to many of Columbia's clerical workers, posed by the Manhattanville gentrification program. As the University aggressively buys up land and buildings to fill in the gaps between the Morningside campus and the Medical Center at 168th Street, consolidating its current status as a real estate mogul in upper Manhattan, it is attracting an increasingly white, upper-class demographic to the neighborhood and pushing long-time, lower-income Harlem residents out of their apartments. Workers paid according to Columbia's ever-decreasing standards could soon be pushed out of the neighborhood if this trend continues. But these kinds of effects—not to mention the resulting loss of diversity in the area—do not fit into the cost-benefit analysis scheme that Columbia presents us with when it rationalizes kicking thousands of Harlem residents out of their homes. Although it has feigned blindness to years of persistent protest from the community, Columbia cannot continue to ignore the students whose tuitions keep it running on a day-to-day basis, especially if we work closely with our neighbors. We must look past the administration's hollow rhetoric, setting its promises of "dependable jobs" for the future against the backdrop of its recent attempts to slash workers' benefits, and continue demanding accountability from Columbia for all the workers who make our education possible. The administration's handling of recent events has hardly set the precedent for a sustainable future in Manhattanville. It is our responsibility as students to ensure that this changes. The author is a Columbia College senior majoring in comparative literature. He is involved with Stop Columbia University Displacement and the Columbia University General Assembly.