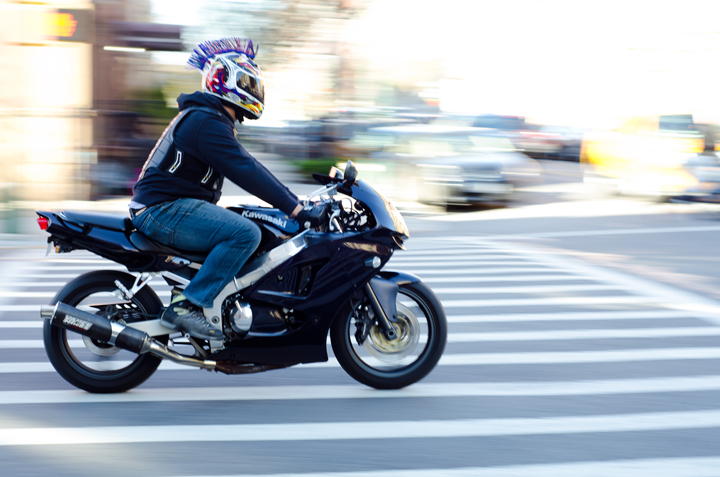 A motorcyclist zooms onto Morningside Avenue on Wednesday. Police and locals are working to eliminate the unsafe conditions caused by speeding cyclists in West Harlem.

Police and residents of West Harlem are working to combat the problem of dirt bikers and all-terrain vehicle drivers, whose noisy street races at illegally high speeds have plagued the area for months, they say. "It's absolutely disrespectful to the entire neighborhood to ruin everyone's peace," said Cator Sparks, the president of the 122nd Street Block Association of West Harlem who has helped to coordinate the local response to the issue. "All I want is peace and quiet on the weekends." The riders, alone or in large groups, have been using the streets east of Morningside Avenue for illegal racing and stunts at all hours, leaving police helpless and residents anxious about the unsafe conditions. The problem has been present for several years now but seems to have exploded recently, said Cindy Worley, a former teacher who has lived in West Harlem for 32 years. Captain Kevin Williams of the 28th Precinct, which spans Central Harlem, has repeatedly acknowledged the problem at precinct and other neighborhood meetings. "It's one of the biggest challenges I have," he said in early March. But Williams reminded residents at the meeting that the traffic and urban layout of Manhattan makes catching riders in the act extremely difficult. Because it borders a park, Morningside Avenue does not have stoplights at every block or a constant flow of cars turning onto it, making it easier for the cyclists to speed down long stretches of the street. "The chase is romanticized in movies and on TV but it's something that we can't do in the five boroughs," he said. "These people act in a manner which I will never allow my officers to." Williams has encouraged his officers and residents to "think tactically" by trying to find out where the bikes are being kept. The police have had some recent success, making three arrests and seizing eight bikes, with Williams personally apprehending one ATV rider. The riders, meanwhile, do not seem to be trying to evade the attention of the community and the police. Multiple videos of them, often under the group name Harlem Legendz, have been uploaded to YouTube. They maintain a website with links to music and merchandise and a Facebook page with more than 200 members. The problem is not restricted to West Harlem, Williams said, and the 28th Precinct is cooperating with the 32nd—which covers north-central Harlem—to stake out areas where the dirt bikes are possibly being kept. Still, residents are frustrated. "I know that people have given addresses and the police haven't shown up," Sparks said. Randi Klein, who has lived in Harlem for six years, is also quite skeptical of the police's commitment to the issue. "I was walking my dog, and six ATVs tear down 114th Street. There were patrol cars there, and I didn't see the car move," she said. "I dialed the precinct and I hung up because I know what the answer's going to be." At the same time, she didn't think catching ATV riders needed to be the police's top priority. "If these idiots want to pop wheelies and wear ski masks, fine. If you're going to come onto the sidewalk and put little kids and dogs in danger, then it's a problem—otherwise I don't really care," she said. Worley, the teacher, also said that the problem should not be the major crime concern of the area. She said that the area had a similar problem with 4x4 vehicles a few years ago. "They would ride around the block and they weren't going anywhere, they were just showing off," she said. "This is kind of the same thing, they're just saying that they have enough money to have a bike." luke.barnes@columbiaspectator.com