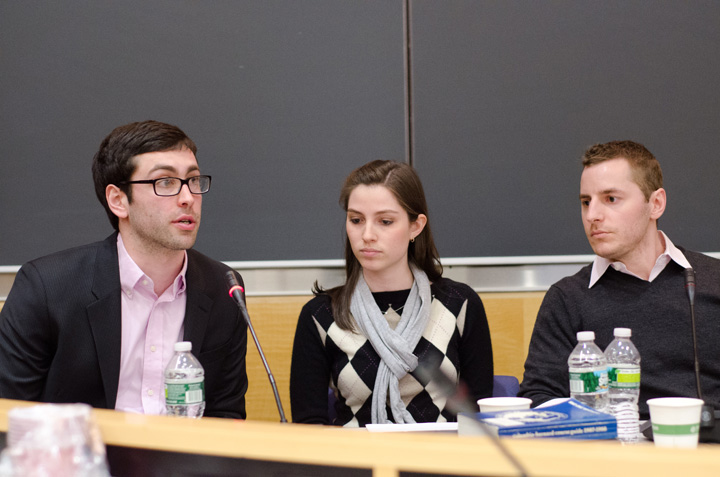 Senators Alex Frouman, CC 12, Sara Snedeker, BC 12, and Ryan Turner, a graduate SEAS student, spoke in favor of a senate proposal that would make public student course evaluations at a town hall on Wednesday.

Students and faculty sparred over a University Senate proposal that would recommend the publication of student course evaluations at a town hall meeting on Wednesday. Students from within the senate and outside spoke in favor of the proposal, but several students and most faculty members opposed it, believing that the publication of course evaluations could threaten the school's academic environment. Under a system of open evaluations, students would have access to some qualitative and quantitative feedback from their peers. The senators' hope is that the information will be integrated into the course directory. Currently, the evaluations are read only by relevant faculty members, including the professor and the department chair. "Open course evaluations could create an atmosphere of pandering, surveillance, that could undermine responsible teaching," School of the Arts professor Bette Gordon said. "Professors' reputations and careers are on the line." Gordon and anthropology professor Marilyn Ivy offered introductory critiques of the proposal after it was presented by three of the student senators who wrote the original report on the topic. The proposed policy was first introduced to the full senate at the March 30 plenary. Open course evaluations would only enhance the system, since students would know that their opinions were being heard, said Ryan Turner, a graduate student in SEAS and co-chair of the Student Affairs Committee subcommittee on course evaluations. "It's really an issue of maximizing the value of our education," he said. "We think that the information obtained from course evaluations really goes a long way towards helping students pick the right classes and making the most of their very precious and limited time here at Columbia. It's not an issue of students versus faculty." Despite this mentality, faculty members who voiced opinions during the discussion were nearly unanimous in opposition to the policy as it currently stands. Anthropology professor Rosalind Morris claimed that unintentional gender and racial bias have been scientifically proven to affect personal evaluations and would unfairly influence the reviews of female and minority faculty members. Morris also said that it is unfair to protect the anonymity of the student responders, while holding faculty members accountable for their performance. "If you want to participate in this world as adults you must be willing to stand by what you say. There really is not transparency without accountability," she said. Jacob Andreas, SEAS '12, called the discussion of attaching a student's name to their review "dangerous." "This suggestion presupposes a symmetry between the situation that the faculty member is in and the situation that the student is in—and that is just not the case," he said. "The consequences of identifying a student are much, much more serious." If names were attached to the reviews, he said, students would not contribute because the reviews could "poison" their experiences at Columbia. Opponents also pointed to confusion around removing an evaluation. According to Gordon, the current description does not grant the faculty member in question enough autonomy in the removal of a specific comment. In addition, allowing graduate student instructors to opt in to the open feedback system could stigmatize those who choose not to participate, Graduate School of Arts and Sciences Dean Carlos Alonso said. According to Sara Snedeker, BC '12 and co-chair of the Student Affairs Committee subcommittee on course evaluations, those who attended the town hall were not necessarily representative of the entire student and faculty bodies. She said that she and other student senators have reached out to many senators, including members of the Faculty Affairs Committee, the Education Committee, the Libraries Committee, and the Executive Committee, and have received at least some support from all of them. An edited proposal will be reintroduced at the last plenary of the year on April 27, and Snedeker hopes it will be voted on then. "There have been lots of opportunities to discuss this," she said. "It's time for a vote." Yasmin Gagne contributed reporting. margaret.mattes@columbiaspectator.com