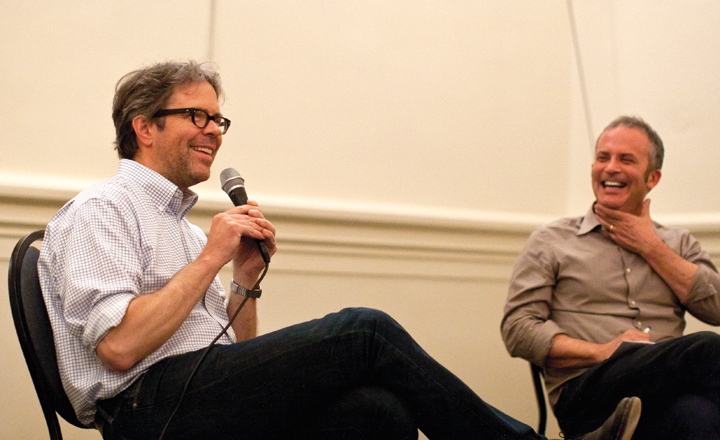 Distinguished novelist Jonathan Franzen gave a reading from his upcoming essay collection to celebrate the anniversary of an innovative affordable housing project.

National Book Award-winning author Jonathan Franzen made a low-profile appearance on Thursday, joining 100 Upper West Siders in ringing in the fifth anniversary of a local affordable housing building. The "Freedom" novelist read excerpts from his forthcoming set of essays at the Semiperm apartment building, on 102nd Street between Broadway and Amsterdam Avenue. To commemorate the anniversary, Carol Lamberg, executive director of the Settlement Housing Fund, which runs Semiperm, invited Franzen, who is friends with her stepson. He read from his essay, "I Just Called to Say I Love You," which will be published in his collection "Farther Away," to be released later this month. Semiperm has been a unique venture from the start, offering transitional housing for struggling single-parent families. "We saw a need for this intermediate," Lamberg said. "We got the financing together for the building and they built 23 one-, two-, or three-bedroom apartments and we came out of it debt-free." The building was funded by the city's Inclusionary Zoning Program, which offers square-footage incentives for buildings that offer housing for low-income individuals. "I did not know that there was long-term housing to help people transition out of homelessness," Franzen said, but he was inspired "to see the work that's being done here at Semiperm, to be around these businesses who directly involve themselves in other people's lives." Semiperm Director Doreen Gibbs said that she sees the building as a "wonderful opportunity" for single-parent families, although the apartments are offered under the agreement that residents will work to secure permanent housing in the future. "We ask that they participate in moving forward in their lives and take an active role, but not everybody wants to," she said. Families who are offered apartments typically stay for 26 months, Gibbs said, and they are allowed to live there for a maximum of five years to ensure that residents continue to move forward with their lives. "We have people who don't want to work," she said. "For the people who are not motivated or haven't decided that they're ready for change, it's not a good fit." Catherine Farrington, who studies policy at Columbia's School of Social Work, has been interning at Semiperm since September. "It was my lucky day," Farrington said of the day she was assigned there. "The staff is very dedicated to the mission and it's very goal-oriented." Gibbs said that Semiperm strives to provide residents with the tools needed to secure permanent housing and succeed on their own—something Farrington also echoed. "They want to allow these women to advance in the right direction," Farrington said. "It's absolutely incredible." While any single-parent family is eligible to apply for housing at Semiperm, only women have applied for and taken advantage of the housing. Having Franzen read at the celebration was particularly special for Gibbs, who called him her favorite author because of his ability to connect with the reader on a deeper level, specifically in "The Corrections," for which he won the 2001 National Book Award. "It was the first book where I could relate to the characters and they didn't have a color," she said. "Usually, I'll read a book and say black people don't say that'—there's something about his writing that just transcends color." jeremy.budd@columbiaspectator.com