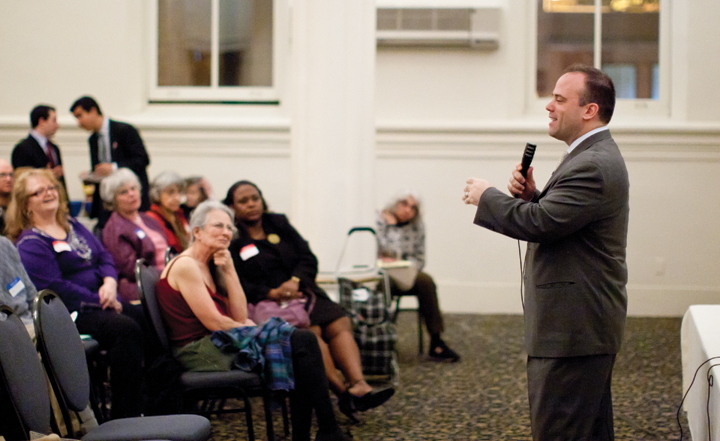 Redistricting drama in New York might not be over—if a lawsuit headed by a local Democratic leader is successful, it could be back to the drawing board for State Senate district lines.

Upper West Side resident and State Democratic Committeeman Daniel Marks Cohen is the lead plaintiff in the lawsuit, Cohen v. Cuomo, which was argued last Friday. The lawsuit alleges the addition of a State Senate seat by the Republican majority in the chamber is unconstitutional. Adding a 63rd seat—which would likely be situated upstate—in the 62-member chamber is widely seen in political circles as an attempt by Republicans to solidify their majority.

Opponents like Cohen also say the district lines the Republicans drew for the 63 seats are highly partisan.

"This takes gerrymandering to a new level of shamelessness," Cohen said. "It's really just blatant and it completely disregards the will of the voters."

New York's constitution includes a provision that allows for adding of additional seats as warranted by population growth. For decades, Cohen said, the Senate lines were drawn using the same method to count voters. After the 2000 census, the State Senate, controlled by Republicans, disavowed that method, calling it "unconstitutional and inappropriate for purposes of determining State Senate districts." But after the 2010 census, Republicans backtracked and used the method in part to count population growth and draw new lines.

"They used whatever method they could to get to the answer they wanted," Cohen claimed.

In a legal memorandum, the attorneys of State Senate Majority Leader Dean Skelos stated that the petitioners in the lawsuit "fail to overcome the 'strong presumption' that the Legislature's redistricting plan is constitutional; and they have not carried their considerable burden to show 'beyond a reasonable doubt' that the 2012 Senate Plan violates the New York Constitution."

The petitioners "cannot possibly hope to demonstrate that the Legislature's choice of a 63-seat Senate was not 'reasonable' or rational," the memorandum reads.

According to Cohen, one of the most egregious examples of gerrymandered Senate districts is the 31st district, represented by State Senator Adriano Espaillat—the shape of which Cohen compared to Chile.

"It runs the entire coast of Manhattan, from 181st Street to 23rd Street," Cohen said. "It's absurd—in some cases it's a block wide, and there's absolutely no justification for that except political shenanigans."

"You cannot argue that the area the district represents is cohesive, geographically similar, or has similar interests," he added.

At a public appearance last month, Espaillat called his new district, which has historically been based in Washington Heights and Upper Manhattan, the "spaghetti district," with "a little spaghetti that goes all the way downtown."

"My mother is now very happy I have Macy's, and my son is very happy I now have Madison Square Garden—but it's a real mess," he said.

"Senator Espaillat has been a long-standing opponent of gerrymandering," Khan said. "We think the voters should pick their representatives, and not the other way around."

After the lines were passed by the legislature and signed by Governor Andrew Cuomo on March 15, the Democratic State Senators, who walked out of the legislative chamber during the vote, sued to stop them from being enacted. The Senators are providing most of the financing, while Cohen and the other plaintiffs provide standing as registered New York voters.

Petitions for the fall primary can be circulated starting June 5, which means a decision on the district boundaries needs to be made in less than two months—"light speed in the world of the judiciary," Cohen said.

"I wish I could characterize his perspective as one way or other, but he didn't tip his hand," Cohen said. "He didn't suggest he had one preconceived notion one way or the other."

Cohen said he expects a decision from Braun around the end of the month. Whatever the decision, the case will almost certainly be appealed to the State Court of Appeals. If the lawsuit is victorious at the appeals court, Cohen expects the court to turn the task of drawing new lines for 62 seats to the same three-judge federal panel that drew Congressional lines.

"You already have a group of redistricting experts standing by who have just competed their task," Cohen said, adding that he expected them to draw fair lines.

Part of Governor Andrew Cuomo's agreement to pass the Senate lines was that in the next redistricting process, drawing the lines would be the task of an independent panel, not the legislature. But Cohen called the agreement "disingenuous" because the panel would consist of appointees by legislators—"controlled by the legislature but with a veneer of independence," he said.

The amendment would create a commission of 10 members, seven of whom would need to support the new lines. The commission would have to hold public hearings and the legislature would be constrained in its ability to amend the plan.