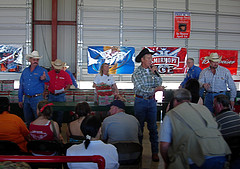 For any intrepid comp-sci majors out there, I have an idea for the next Facebook. Ok, maybe not Facebook, but a social marketplace for undergrad housing, which in the world of Columbia, is probably just as significant to all of us as a the thing called "life" that Facebook covers for the rest of the world. Here's my proposal: What if someone made a Craigslist/eBay-esque website that allowed people to buy, sell, or auction their lottery numbers? (Because who doesn't want more complications in the housing process?!?) But seriously, let's say you're a rising senior who's just planning on snagging some Broadway singles with some friends. Easily attainable with even the worst 30-point lottery number. But what if you open up your housing portal and discover something like 30/43? Holy shit, that could get like, the underground laser tag arena in PrezBo's house!!! (Or at least a Watt studio single!) While that would certainly be nice, you aren't necessarily dying for Watt, and you'd be more than happy with Broadway, so why not have the ability to trade your number to someone who's prepared to sell one of their kidneys for their own kitchen and bathroom? more Ditto for a suite selection group that gets an amazing number but doesn't necessarily mind taking a place with a double. How about allowing them to trade down for some compensation and allow a group that desperately wants all singles to take their spot? Why not try to eliminate inefficiencies and create a marketplace that would distribute rooms to those who would get the most utility out of them? Otherwise, the first group is just going to take the all-singles suite because, you know… it's there for the taking, and they suppose they might as well, right? Let's use a sports parallel for a second. This year, the Rams had the No. 2 pick in the NFL draft. Everyone expected Robert Griffin III, widely considered the second best player in the draft, to be available then. Only one issue: The Rams had already invested $78 million in quarterback Sam Bradford and really didn't have a need for another signal caller. So what did they do? They simply traded down in the draft, gave up the No. 2 pick to a team that desperately wanted a QB and would take RG3, and received compensation for the downgrade in return while drafting a lesser-value player that would better fit their needs. Why can't this be implemented in the housing draft? Look, I already know what you're thinking: This only helps the rich kids. But hear me out—my idea essentially helps two sets of people:

Jim Pagels is a Columbia College junior majoring in English and American Studies. He's only pitching out this idea so he can get into the Phoenix Club.