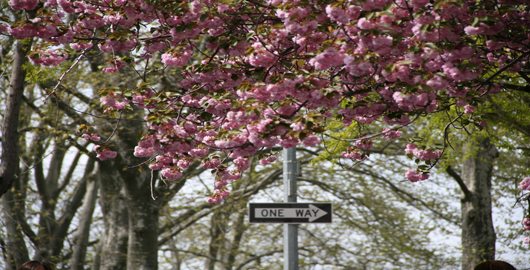 The cherry trees in Sakura Park were a gift from Japan 100 years ago.

For many locals, the Sakura Park cherry trees in northwest Morningside Heights are nothing more than a beautiful reminder that spring has arrived. But the trees have a long, symbolic history—one that was celebrated Saturday in a ceremony commemorating the 100th anniversary of their planting. In 1912, Japan gave New York City a gift of 2,000 cherry trees, or "sakura" in Japanese. Thirteen were planted in Claremont Park—which was renamed Sakura Park—at 122nd Street and Claremont Avenue, and the rest went to Riverside Park and other spots throughout the city. "These trees have a meaning much deeper than the coming of spring," said Japanese ambassador Shigeyuki Hiroki, who attended the ceremony. Hiroki called the cherry trees a "living testament of the friendship our two countries share." "Our affection for the United States is as deep-rooted as the roots of these trees in American soil," he said. Hiroki also thanked guests at the ceremony—which was part of this weekend's Cherry Blossom Festival—for the "outpouring of support" for Japan after the tsunami last spring. "People in Japan knew they were not alone in their struggle," he said. In a re-enactment of the original gift, Hiroki presented six cherry tree saplings to the city. Just as 13 American women dressed in kimonos—a traditional Japanese garment—for the original gift a century ago, six kimono-clad American women attended the ceremony Saturday. "The original trees lived out their lives, but we're reminded of the gift every day in the hundreds of cherry trees that flourish in Riverside Park," John Herrold, president of the Riverside Park Fund, said. The trees in Sakura Park today—and the six saplings that Hiroki presented on Saturday—are genetic descendents of the original gift. Herrold said the six saplings would be nurtured until they can be planted in Sakura Park. "We will care for them in the years ahead so they can be enjoyed by millions," Herrold said. Most of the cherry trees in the park—those of the Yoshino variety—bloomed a month ago due to this year's early spring, but several Kwanzan-variety trees at the south end of the park were at their peak Saturday, blooming in brilliant hues of pink. Many attendees said they saw the trees as symbols of friendship, peace, and resilience. "In the cherry blossom's shade, there's no such thing as a stranger," said Parks and Recreation Department Commissioner Adrian Benepe, quoting a poem by Japanese poet Kobayashi Issa. "When I look out at you today, I only see friends." Lisa Staiano-Coico, president of the City College of New York, said the cherry blossoms reminded her of the "renewal of spring, the great greening of the earth," and the "resilience of the people of Japan." Others looked to the future. Takashi Kano—the president of the Nippon Club, a New York social club for Japanese Americans—said he hopes that "on the banks of the Hudson, there will still be cherry trees" for hundreds of years. "We'll still celebrate the beautiful gift to the U.S. ... and the bond between the people of Japan and America," he said. The 2,000 trees presented in 1912 were actually a second attempt at a gift, Kano said—three years earlier, a shipment meant to commemorate the 300th anniversary of Henry Hudson's voyage to North America was lost at sea. "The cherry blossom represents peace and unity. It represents the unity of the culture and two countries," said City Council member Inez Dickens, who represents Morningside Heights and part of Harlem. "We will take care of these seedlings for generations, so our young people, who are inundated with violence, will understand ... about unity, culture, and beauty." Following the ceremony, the 100th anniversary celebration continued across the street from the park at Grant's Tomb, with a concert featuring Japanese and American artists. The performers included Taiko drummers, winners of the Apollo Theater Stars of Tomorrow talent show, and the Harlem Japanese Gospel Choir. The concert's location was no accident—Ulysses S. Grant, who in 1879 became the first U.S. president to visit Japan, provided "valuable advice to our government officials," Hiroki said. casey.tolan@columbiaspectator.com