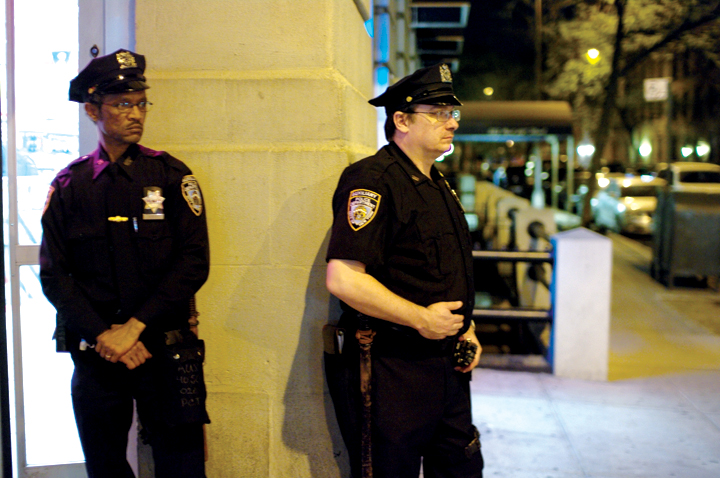 Increased street presence by cops, including these on the corner of 111th Street and Broadway, is reducing crime.

More cops are hitting Upper West Side streets in an effort to reduce crime—and a reduction in theft shows that it's working, according to police officials. The 24th Precinct has added 13 rookie cops on patrol in the last month in order to slow an uptick in thefts and property crimes. The situation has gotten "a lot better in the last 28 days, but larcenies still make up the bulk of crime in the 24th," Captain Nancy Barry said at a community meeting on Wednesday. Most of these robberies are occurring in buildings or stores when residents or patrons leave their belongings for just a few minutes, only to come back and find them stolen. "They're spread out so we can't focus on one location," Barry said. "However, we are seeing a reduction in person-on-person larcenies." Barry added that warmer weather leads to an increase in burglaries in the area, as more residents leave their doors and windows unlocked. Some store owners and workers are concerned about the rise in crime. "I do feel like there's a lot of theft," Victoria Estrada, who works at Spices and Tease tea shop on 97th Street and Broadway, said. A co-worker had his iPhone stolen after leaving it on the counter. "A guy who always comes in for change came in and took it," she said. "The cops were already looking for him, so they got him two hours later and sent him to jail, but my co-worker didn't ever get his iPhone back." The store now has 10 closed-circuit cameras. The 96th Street subway station is a crime hot spot, police said, where rushing crowds provide ideal cover for pickpockets and thieves. As a result, the police have significantly increased their presence around the station. During rush hour on Monday, nearly a dozen officers were patrolling in and around the station, with a patrol car and unmarked van outside as well. "Things are a lot better than they used to be" at the 96th Street station, Carmen Hernandez said. "It's more open and you can see what's going on. The cops are always there, but you just don't see them a lot of the time." Jose Gonzalez, who takes the train to 96th Street nearly every day, agreed that the increased police presence is noticeable. The police "are always around there now, every day from the morning onwards," he said. "The station's a lot calmer now, people can't jump from track to track like they used to back in the day." luke.barnes@columbiaspectator.com