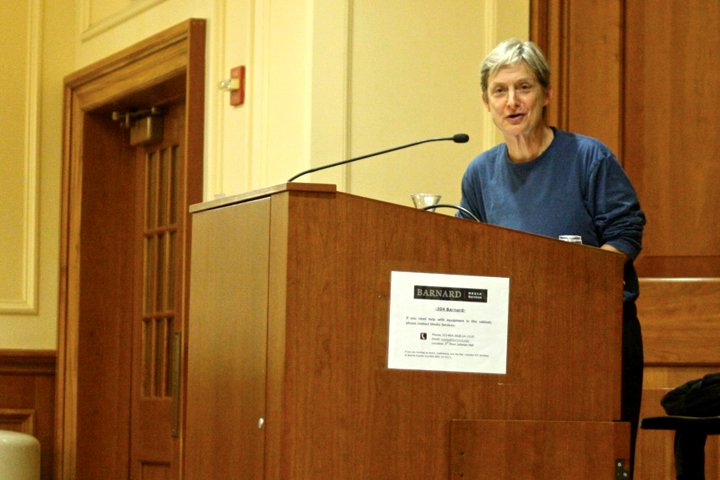 The humanities were given a vote of confidence from an intellectual superstar on Wednesday, in a lecture by renowned feminist and queer theorist Judith Butler. Butler delivered "Reflections on Kinship Trouble," the third installment of the Barnard Humanities Initiative in Barnard Hall. Butler's influential book, "Gender Trouble: Feminism and the Subversion of Identity," changed the course of gender and sexuality studies by famously putting forth the theory that gender and sexuality are performative, when it was first published in 1990. In the lecture, Butler explored kinship as a source of confusion. "People are periodically confused about kinship," Butler said at the beginning of her lecture. Kin relations are both recognizable and "nearly unrecognizable." "Children do ask, 'Are you my mother?' and a fair amount of children's fiction is oriented around the question whether or not a given animal, for instance, is or is not someone's mother ... or which one is the real mother?" The author of 2000's "Antigone's Claim: Kinship Between Life and Death," Butler focused her discussion on Greek tragedy—specifically, Euripides' "The Bacchae" and Sophocles' "Oedipus the King" and "Antigone." But she also brought her discussion outside of the realm of theory into a modern context. Butler cited an amicus brief she wrote­—which argued that the Chilean Supreme Court's decision to deny Karen Atala, a lesbian mother, custody of her children violated her human rights—to illustrate how modern kinship categories do or do not attach to people. "In arguing for her parental rights her lawyers had to discredit the notion that she was damaging her children and their development by virtue of being out' as a lesbian and a mother," Butler said. "If one returns to The Bacchae' with this case in mind, one might wonder how we rethink the figure of Agaue Does the play give us insight into the murderous aggression of mothers—of the murderous consequences of their sexual ventures or sexual dispositions?" Using these classical examples as a foil for a greater discussion of sexuality and gender, Butler discussed the impact of a parent's sexuality on a child—or the lack thereof. "A young adolescent girl says to her two dads, 'Will you be disappointed in me if I'm not gay?' And they respond, 'Listen, if you're gay, you'll be like us. If you like men, you'll be like us. So in either case, you won't escape us.' It's a strangely narcissistic response meant to operate in the service of permission." But for Butler, it returns us to "the problem of those breaks in kinship that seem to be part of its very definition and those forms of misrecognition that seem to characterize the life of kin relations." The lecture related to Lit Hum texts in two ways, according to Christia Mercer, the chair of Literature Humanities, who was in the audience. "All of them [the Lit Hum texts] involve, fundamentally, some discussion of family and family-relations, so it's obviously relevant there," Mercer said. "But also given that she talked about some of our Lit Hum authors and some of our Lit Hum texts, it was a really rich analysis of part of Sophocles." The lecture provoked Mercer's interest in a topic beyond the scope of Butler's discussion. "One thing I was going to ask her is the question about the Christian notion of kinship, because that notion of kinship is universal—and that's a very Lit Hum question—as a counter to the ancient Greek stuff," Mercer said. Butler is a visiting professor of the humanities in the department of English and comparative literature. Butler is teaching a graduate course in the department called "Reading Kafka." arts@columbiaspectator.com