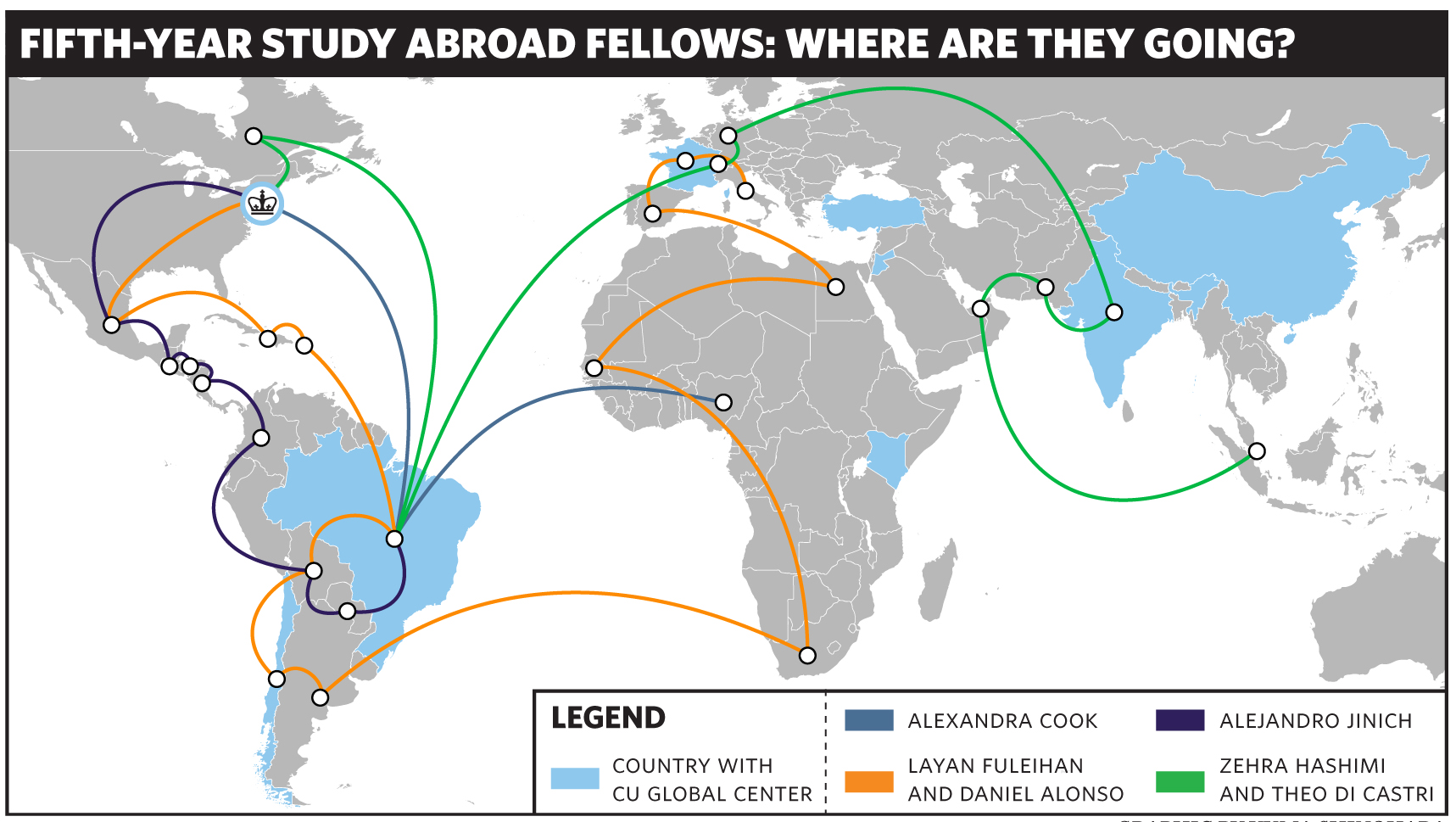 Six seniors will spend a year after graduation studying abroad as part of the inaugural fifth-year fellows program, and the Core Curriculum might join them overseas. As the fifth-year fellows prepare to travel around the world—using Columbia's eight global centers as hubs—several faculty committees are developing proposals to teach Core classes at the centers as well. "We definitely want to use the global centers as base camps, but we also want to branch off," said Theo Di Castri, CC '12 and one of the fellows. "The centers are ways to get connected to various institutions and people who might be able to help us out." The other fifth-year fellows, all Columbia College seniors, are Daniel Alonso, Alexandra Cook, Layan Fuleihan, Zehra Hasmi, and Alejandro Jinich. Vice President for Global Centers Ken Prewitt said that the University has secured need-based financial aid for the fellows from donors. "The business plan will evolve as we learn how well this program works," Prewitt said. "It will certainly require resources of funding, and I would expect those to be donors who would be particularly attracted to a program as innovative as this one." There are currently global centers located in Amman, Beijing, Istanbul, Mumbai, Nairobi, Paris, Rio de Janeiro, and Santiago, and there are likely more on the horizon. Di Castri, who is studying neuroscience and comparative literature, and Hashmi, an anthropology major, will conduct a joint research project, traveling through at least eight countries. They plan to connect their sciences and humanities backgrounds, examining public spaces in cities through several binaries—local and global, utopia and dystopia, and the old and the new. "We wanted to deconstruct binaries that emerged when thinking about globalization," Hashmi said. "The whole [fifth-year] program itself wants to build off the Core Curriculum. We came up with this idea from the Core. What are the ideals within the Core of Rousseau or Locke? What was this modern idea of a society?" "We're going to go to Dubai and Singapore as two examples of places that have taken on this idea of modern utopias and see what underlies that," he added. They will also explore the local-global divide by visiting Brazil, Switzerland and India, as well as their home countries—Canada for Di Castri and Pakistan for Hashmi. "I think we both come from fairly inward-looking places," Di Castri said. "Globalization always seemed like this thing that happens elsewhere. Even those places that are seemingly so very local are implicated in globalization." Alonso and Fuleihan will also travel together. The six students will start with on-campus seminars in September, travel abroad between October and March, and come back to campus by April. Prewitt said that there were fewer applicants than he had hoped for. The program was open to students in CC, the School of Engineering and Applied Science, and the School of General Studies. Jinich plans to travel to eight Latin American countries, including Mexico and Brazil, to study the social climate in places where economic growth and social inequalities have developed simultaneously. He will conduct research by talking to individuals in the countries that he visits and immersing himself in the local cultures. "The idea is spending at least three weeks in each place," Jinich said. "I don't want to be jumping around and then lose opportunities for more profound engagement." Victoria de Grazia, the interim director of the Paris global center, said it is important for the University to discuss whether to focus international education around visiting a wide variety of countries or immersion in just a few cultures. "The important thing is not to do tourism and to dig in," de Grazia said. "I think that there are differences in how we understand getting on the ground in the world, and that's what's interesting to debate." That is one of the questions being considered by several committees examining how to take the Core abroad. One of the committees, led by Dean of Humanities Pierre Force, is looking to start programs in Paris, Istanbul, and Santiago. Force said that instructors would teach several Core courses abroad for one semester each, starting as early as fall of 2013. The proposed classes, which are under consideration by Executive Vice President for Arts and Sciences Nicholas Dirks, would cater primarily to sophomores. "Because the college has so many requirements in the first two years, it's very difficult for students to go abroad before their junior year," Force said. "So you can give students the possibility of studying abroad sooner." CC students are required to complete both semesters of Literature Humanities and Contemporary Civilization before studying abroad, according to the Office of Global Programs website. Force added that the idea of bringing the Core abroad would be a new model of education for Columbia students going abroad. While traditional study abroad offerings like language and cultural studies will still be available, they will not be students' main focus under the new model, he said. "It would be a different way of understanding study abroad, in the sense that this category of students would not be required to have a vast knowledge of French, or to focus necessarily on French Civ, on their studies there," Force said about a possible program in France. But de Grazia—who is being succeeded as Paris center director by former New York Public Library president Paul LeClerc—said that the Core might be better off remaining in New York. "The Core is set up to read text. It's not about place," she said. "I just don't see what the big virtue is to reading Rousseau in France." melissa.vonmayrhauser@columbiaspectator.com