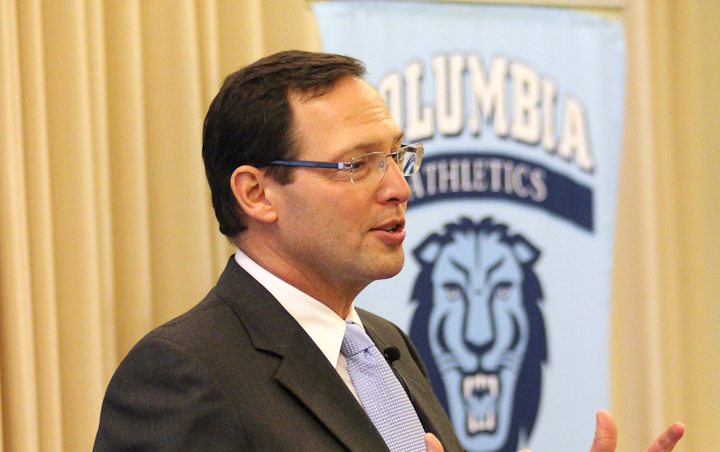 It seems that just about everywhere social media is the word of the day, and Columbia football is no exception with Pete Mangurian now at the helm. The Lions' new head coach is an active presence on social media sites such as Facebook and Twitter, and also has a blog on WordPress. Although Mangurian is already popular—he has 3,043 Facebook likes and 258 Twitter followers (at presstime)—he is fairly new to social media. "I actually started getting serious about social media just before I came to Columbia," Mangurian, whose hiring was officially announced last December, said in an email. This newfound interest reflects Mangurian's desire to have his voice heard amid what he characterizes as the storm of potentially misleading media perspectives present in the contemporary sports world. Today's fans and analysts have far more information at their disposal than just the box score. "I was just naïve enough to think if you do your job well, people will notice things and things will take care of themselves," Mangurian said. "The reality is you either put your own message out there or leave the truth up to somebody else's interpretation." Mangurian thinks social media is particularly useful in maintaining communication with individuals not directly connected to the program, but are interested in the inner workings of the team. "The people outside the circle, who are emotionally invested in the program, want to know who we are and what we believe in," Mangurian said. "Social media allows us to communicate with a large group of people with a common interest, and to define our brand." Mangurian has not held back, and often shares tidbits about practices and depth-chart decisions on Facebook and Twitter. For instance, on Aug. 23 he posted on Facebook that "five or six unselfish guys will be going both ways" by playing both offense and defense. The post generated 15 likes and two enthusiastic comments, including one lauding Mangurian's "old school" style. Additionally, an Aug. 27 Facebook post mentioned that the depth chart was "starting to take shape," and an Aug. 31 tweet mentioned that the day's scrimmage was "better," but that there was "still a long way to go." The coach's Twitter and Facebook pages are also peppered with a healthy dose of more laid-back posts that are not related to the Lions. Other subjects range from tweets about the Yankees-Red Sox game on Aug. 17 to a March 20 Facebook photo captioned "throwback Tuesday," showing Mangurian and two players during the former's tenure with the Tampa Bay Buccaneers of the National Football League. Though he uses both Twitter and Facebook more regularly, Mangurian prefers the more extended format of WordPress. "I like the blog the most. I think 'why' is important, and it's hard to explain things on Twitter," Mangurian said. He does in fact write fairly extensive blogs, the last of which dates from Aug. 14. In that 1064-word post, Mangurian meticulously described some changes in personnel, and identified challenges facing Columbia's program, including its history. He also stated in clear terms that he was unhappy that only one third of the team stayed over the summer. But he spent the majority of the post addressing matters more positively, praising the new strength and conditioning coach Ryan Cidzik and the new director of football operations John Patagna. The team nutritionist Tara Ostrowe and others were also commended. In terms of future social media projects, Mangurian mentioned that he hoped to utilize Twitter more effectively. "I need to improve on Twitter," Mangurian said, adding that the quick, cut-to-the-chase nature of the site does not mesh well with his very deliberate approach to social media. "I do appreciate the spontaneity of Twitter, but I'm not as comfortable with it. I like preparation and a plan." Given the number of boneheaded social media-related decisions made on a daily basis, a more restrained approach to tweeting and the like certainly seems like a winning formula. sports@columbiaspectator.com