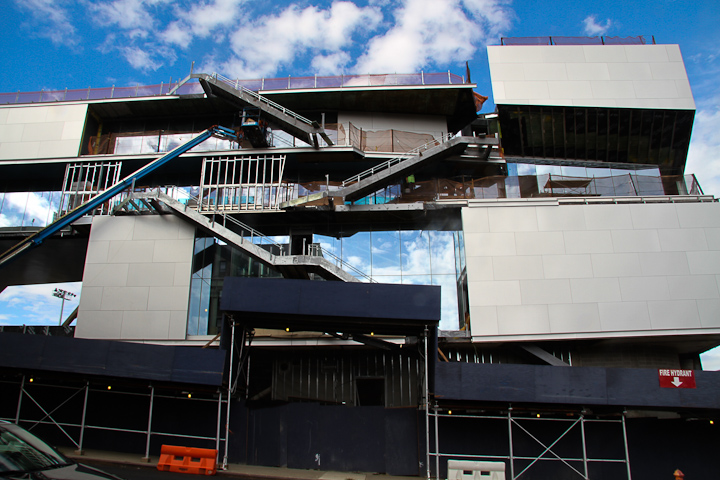 NEW BEGINNINGS The opening of the Campbell Sports Center is expected to greatly assist student-athletes.

Homecoming Day brings more than a football game this year. The date, Oct. 20, is also set for the dedication of the new Campbell Sports Center, the latest addition to the Baker Athletics Complex. "With 31 varsity sports programs and more than 700 student-athletes, Columbia athletics has not had the adequate facilities or space to accommodate our entire athletics program," athletic director M. Dianne Murphy said in an email. "Our nine varsity sports programs will finally have the space necessary to accomplish all of their team-related tasks in one place—something that was previously impossible." The center is geared toward the nine varsity teams—football, softball, baseball, lacrosse, field hockey, and both men's and women's tennis and soccer teams—who currently play home games and practice at the Baker Athletic Complex. The 47,700-square-foot building houses a state-of-the-art strength and conditioning center, a theater-style classroom, offices, conference and meeting rooms, a hospitality pavilion, a lounge available to the coaches and athletes, and an athletes' study center. "The Lavine Student-Athlete Study Center will be extremely helpful in our student-athletes managing the academic rigors of an Ivy League education and the demands of an NCAA Division I student-athlete," Murphy said. The study center will provide wireless Internet access, individual desks, and conference tables where individual and group study sessions can be held when needed. "There's no questioning the prestige of the school from an academic standpoint. And now, I think, with the construction and completion of the Campbell Sports Center, people will continue to see the rise in competitiveness and success throughout the athletics department," junior soccer defender David Westlake said. "I think it will attract new and young talent." "The Campbell Sports Center provides our varsity sports teams, student-athletes, and coaches with the facilities they need to be successful in Division I and Ivy League athletics," Murphy said. For varsity athletes, the center's benefits extend beyond space. The 22-minute shuttle service to the Baker Athletics Complex, in place for the last two years, will continue, and while there is no cafeteria on site, Columbia College Dining Services is developing food service options for athletes during practice and competitive seasons. The center will also host special events, including receptions, alumni functions, outside rentals, and recruiting weekends. Other members of the Columbia community will be able to rent meeting rooms in a manner similar to the meeting rooms available in Lerner Hall. But some non-varsity athletes on campus are dissatisfied, noting that club athletes do not have guaranteed space at the center. "The rugby team has a really hard time finding practice space. Even though we are not a varsity sport, we are a team nonetheless. This would be showing blatant favoritism," sophomore Paulina Pinsky said. Former men's lacrosse club president, Kareem Elsirafy, GS '12, believes that the lack of guaranteed space is part of a trend. "I think it's just the continuation of the lack of support that the club sports are getting, and I think it's an important thing that they do get [support] because they could be a great thing for Columbia." Even a place for a whiteboard in Campbell, he said, would be a simple boost in training for the championship-winning squad. The way Campbell will be used by residents is also unclear. While the University signed a community benefits agreement last spring, many residents said they had no input in the agreement. While the center is still under construction, the athletic department noted that construction is currently moving without delay or difficulty. Correction: A previous version of this article attributed all of M. Dianne Murphy's quotes to Darlene Camacho, the associate athletic director. Spectator regrets the error.