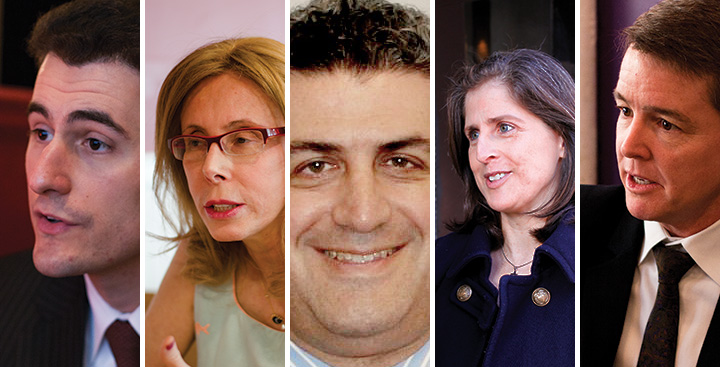 With one year until the primary in a highly contested Upper West Side City Council race, all eyes are on the citywide redistricting effort and the candidates' fundraising numbers. The first four candidates to declare—Democratic district leader Marc Landis, former Community Board 7 chairs Mel Wymore and Helen Rosenthal, and businessman Ken Biberaj—had all raked in more than $100,000 as of the last fundraising report in July. Democratic State Committeewoman Debra Cooper declared her candidacy two weeks ago, joining the race to replace City Council member Gale Brewer, who is running for Manhattan borough president. Because of the city's generous matching funds program for elections—$6 in city funds for every $1 donated, up to a certain amount—all the candidates are expected to have roughly the same amount to spend on the campaign. But one important issue in Democratic primaries around the city is who is donating that money. Wymore, Rosenthal, and Cooper have all said they will not accept money from StudentsFirstNY, a pro-charter school organization that has come under fire for its ties to Mitt Romney donors. Landis said StudentsFirstNY would never donate to him, and Biberaj, whose campaign has already reached the matching funds limit, told Spectator that he will not accept money from PACs. "Because of public campaign financing, no one is going to have a financial advantage, and this is much more about community support and being able to convince voters you're the best candidate," local Democratic State Committeeman Daniel Marks Cohen said. Cohen has not endorsed a candidate, though he called Landis the favorite to win the race. "It's hard to imagine anybody else, who doesn't have the same sort of deep political and community history as Marc," winning the race, Cohen said. Landis recently made a splash in another local election—the State Senate primary race between State Senator Adriano Espaillat and State Assembly member Guillermo Linares. According to the New York Daily News, Landis alleged in a letter last month that the city Board of Elections rejected poll worker applications from district leaders supporting Espaillat. District leaders each appoint a certain number of poll workers, and most are usually approved. Landis, as second-in-command of the Manhattan Democratic Party, is technically required by state law to "authenticate" poll worker applications, the Daily News reported. Elections board spokesperson Valerie Vazquez confirmed that the board had received Landis' letter, but said that "the letter by Mr. Landis is not accurate" because the board never received the authenticated applications in question. Landis sent the board the applications along with his letter, and when the board received them, Vazquez said, it approved them. "This is disturbing for us for obvious reasons," Espaillat spokesperson Ibrahim Khan said. "We want a fair shot at communicating Senator Espaillat's progressive record and making sure every single vote is counted." Landis declined to discuss the letter. He lists Espaillat as a supporter on his campaign website. Keith Wright, the head of the Democratic Party in Manhattan—who strongly backed Rep. Charles Rangel against Espaillat in a Congressional primary earlier this year—called Landis' allegations false, according to the Daily News. Another issue that could have a profound impact on the City Council race, and on the political landscape of Manhattan, is redistricting. The city redistricting commission released a draft district map yesterday, although the only significant change proposed to Brewer's district—District 6—is extending it a few blocks further north, as far as 99th Street. The 2013 elections will be the first to use new City Council districts that will be drawn over the next year, although the districts are not likely to be finalized until at least early 2013. Two of the City Council candidates had previously called for similar changes to District 6 in testimony to the city redistricting commission last month, according to commission records. Landis and Rosenthal said the district should extend further north, to encompass more of the neighborhood. casey.tolan@columbiaspectator.com