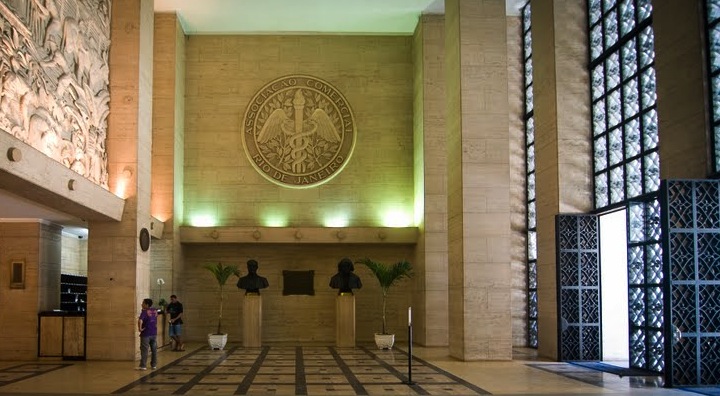 The lobby of the building that houses Columbia's global center in Rio de Janeiro. Courtesy of Thomas Trebat

With Columbia launching a global center in Rio de Janeiro this Thursday and Barnard preparing for its fifth Global Symposium in São Paulo, the University is strengthening its relationship with Brazil—a welcome piece of news for professors and students concerned about a shortage of resources available to undergraduates interested in studying the country. The Rio center will officially launch at an event on campus next week, part of a weeklong summit for the global centers' directors. It will be the eighth global center in Columbia's rapidly growing international network. The Rio center staff is still hurriedly setting up the office, said Thomas Trebat, the center's director, and it is anxious to get the center off the ground. He envisions that, in the next year, students and scholars at the Rio center will focus on research areas specific to Brazil, including the impact of climate change, the geology of the ocean floor, and infrastructure in future Brazilian cities. "The promise is a little intimidating in trying to deliver on it, but we're starting, and I'm very encouraged that we're on the right track," Trebat said. Barnard is also directing its gaze to the South American country as it makes plans for its next annual symposium, which will take place in March. The event is set to include women's leadership panels featuring women from the region, as well as a workshop for high school girls. Hilary Link, Barnard's acting vice-provost and dean for international programs, said administrators chose Brazil for this year's symposium largely because it provides strong examples of female leadership. "Brazil is a fascinating place on so many levels, not only because it has such fast-growing economy and political presence, but also the president of Brazil is a woman and many of her top ministers are women," Link said. These efforts to connect Columbia with Brazil are filling what undergraduates say is a dearth of resources for Lusophones on campus. The Barnard Grants Committee chose four Barnard faculty members to work on Brazil-related projects for the symposium: Jose Moya, Maria Rivera Maulucci, Nara Milanich and Colleen Thomas-Young. Thomas-Young, a dance professor, is developing plans to make a film with Brazilian-born Petra Costa, BC '04, and to hold a contact improvisation dance class in Brazil. Contact improv dancers use "weight-sharing and trust" to lift their dance partners, which Thomas-Young hopes will encourage Barnard and Brazilian students to connect across national lines in a new way. "You have to listen to your partner, and it's going to be a new language, because everybody moves differently," Thomas-Young said. "When you dance with somebody, you're sharing how you're move, and they're sharing how they move." Marc Hertzman, who recently became director of Columbia's Center for Brazilian Studies, said that he plans to diversify the center's offerings by exploring the connection between Brazil and Latin America in nuanced terms. Hertzman also said that one of his goals is to "reach out directly to undergraduates," particularly by holding events in preparation for the Barnard symposium. "My hope is that we keep up Brazil's presence on campus, but in a way that doesn't segregate or isolate Brazil, which happens a lot," Hertzman said. "The idea is really about connections, between Columbia and Brazil, but also between Brazil and the Americas." Marin Fanjoy-Labrenz, BC '13, said that while she is interested in Brazilian literature, there are few faculty members with whom she can consult. She has found Brazil to be underrepresented in Latin American literature courses, and she is hesitant to write her thesis on Brazilian literature in Portuguese, as so few professors are Lusophones. "It's hard to talk about Brazil in any language other than Portuguese," she said. "There are so many words in Portuguese that describe how Brazilian intellectuals feel about their national canon, and how it relates to other canons." For Rebecca Clark, CC '13, who is interested in studying the intersection of theater and race in Rio, it has been difficult to find opportunities for undergraduates to study the country. "There's a lack of expertise in studies relating to Brazil at the undergraduate level, but I'm excited to see that it's growing and that we're looking for more resources to provide students with more information about Brazil," she said. With the momentum building around Brazil at Columbia, Karen Fairbanks, chair of the architecture department at Barnard, decided to teach a design course this semester about architecture in Rio de Janeiro. "We want to understand the pressures and issues around urbanization and the pressures on resources in that context," she said. Fairbanks said she selected Rio not only because of the new opportunities on campus related to the upcoming symposium in Brazil, but also because of the location of Columbia's global center. "We're also working in relation to places where Columbia has established global centers. We are going to meet the director of the global center in Rio, and he will be giving us a talk, and we'll spend most of our time with Studio-X folks," she said, referring to the architecture school's center for urban and design studies in Rio. "There's no comparable way to learn about Brazil unless you're actually here," Trebat, the director of the Rio global center, said. "So I'm hoping that in some small way, with some number of Columbia students and professors, that this office is going to give them a chance to learn a great deal about this very fascinating country." melissa.vonmayrhauser@columbiaspectator.com