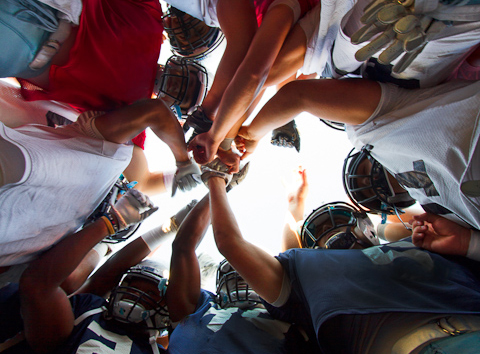 The Lions are attempting to shift their way of thinking.

Over the next 10 weeks, Columbia's football team will be judged first and foremost by the numbers on the scoreboard at the end of each game. But we will also be witnessing the beginnings of a much broader, and perhaps more important, battle beneath each victory and defeat this season: Columbia football is attempting to redefine its culture and mentality. While many of Columbia's athletic teams have had noticeable success in recent years, the football program has continued to find itself at the bottom of the Ivy League standings. The last time the Lions were at the top of the Ivy League, John F. Kennedy was president. Since Bill Campbell became the head coach in 1974, the team has won just 22.5 percent of its games. The Light Blue hasn't even had a winning season in 16 years. As if reinventing the program wasn't difficult enough, the Lions are coming off one of their worst seasons in recent memory with a 1-9 record. When new head coach Pete Mangurian accepted the job, he was well aware of the program's losing past. At his introductory press conference last December, Mangurian attempted to outline what he believed was required. His answer? A new culture. "This is going to require a different way of thinking, and that is going to start today," Mangurian said. At Columbia's recent football media day, Mangurian echoed the sentiment. "I think if you haven't had any success in 51 years, something has to change," Mangurian said. "I wouldn't think that was an opinion that was really far-fetched. I'm really not interested in remodeling the house. We went at this by starting all over again." While Mangurian chose not to outline specifics of how he has gone about implementing this change, he revealed certain aspects of the mentality he is trying to instill within his players, staff, and everyone involved in the program. The first part of this new mentality is an expectation of excellence from his players. "That's the message they get every day," Mangurian said. "We are in the pursuit of perfection, and we all know that is hard to achieve. Once you start expecting less than that, I don't know where that stops. All of a sudden, it turns into mediocrity." Despite the disappointment of the Light Blue's 2011 season campaign, Mangurian believes expecting excellence from his players can work, especially at Columbia . "We will hold our players accountable to a high standard in everything that we do, just like our faculty does in the classroom, just like this university holds everyone to a high standard," Mangurian said. "You are surrounded by an environment which expects excellence. That's a pretty good nurturing situation to be in when you are trying to turn a program around." Moreover, Mangurian believes that the team must expect to win each time it takes the field. With this in mind, Mangurian chose assistant coaches who had witnessed winning programs firsthand in the hope that their experience would infect every level of the program. "They've all been in places that have won," Mangurian said. The shift in mentality has not gone unnoticed by players on both sides of the football. "We pretty much do the same thing, but now there is bigger emphasis on winning," senior defensive end Seyi Adebayo said. "That's really what makes the difference. You can definitely tell that the attitude and the atmosphere around the team has changed a lot." Mangurian "has changed everything," junior running back Marcorus Garrett said. "It's a lot different from last year. I feel like we're a lot more confident. Everybody seems to be buying in and trying to get after it and get better." Mangurian has also sought to improve the organization and focus of the entire program. Considering his background as an assistant at some of the most successful teams in NFL, this shouldn't be surprising. "We hold them accountable on the little things on the field," Mangurian said. "This is all about doing it absolutely and correctly every single time." "Our organization has really improved," Adebayo said. "Everything has a sense of purpose. There's really a lot of attention to detail." While a big cultural shift will not occur overnight, Mangurian continues to believe that the program has the available resources to eventually compete for championships in the Ancient Eight. "There is far more support on campus than anybody believes," Mangurian said. "Whenever I've reached out and asked for help, support, or whatever it may be, I've been greeted with, 'Yes,' and enthusiasm in the pursuit of trying to make this program as excellent as the University is." Yet, how the players and coaches see themselves is only one side of the coin in the program's cultural predicament. The image of the program in the eyes of the student body and the University as a whole may prove more difficult to redefine. But Mangurian is focusing on what he can control—the team's play on the field. "I'm going to let how we play define who we are," said Mangurian. "I think we can be entertaining and be competitive. If that is something that appeals to people, then they'll like the product on the field, and it will continue to get better. We're not going to win by giving away T-shirts and having slogans. That's not what this is about. Obviously, the people on campus have a little more depth than that. If the product is competitive, I think it will compel people to watch. That's all we can control. I'm not in charge of marketing. I'm in charge of the football team." sports@columbiaspectator.com