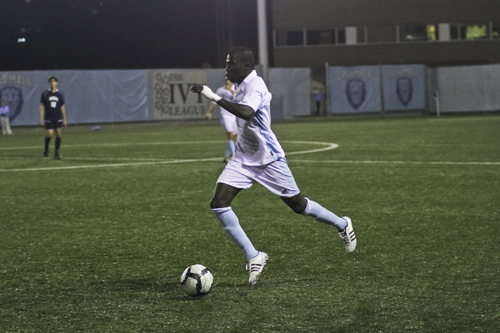 Between his talent and personality, sophomore Kofi Agyapong is turning heads.

Last Wednesday, the men’s soccer team was in a scoreless match with Saint Peter’s at halftime. In the 59th minute, though, talented sophomore forward Kofi Agyapong got the ball in the box, cut past a defender, cut around the goalie, and deposited the ball into an open net for the game’s first goal.

From a quick examination of highlight reels on YouTube, it’s obvious that he has plenty of talent.

“He’s very technically gifted, very good and confident with the ball, really good dribbler,” senior midfielder/forward and co-captain Nick Scott said. “He shows moments of magic, which is always good for a player to be able to do.”

It’s rare that a top college recruit in a major sport chooses an Ivy school, but Agyapong did just that last year by transferring to Columbia. For that and other reasons, his journey to Morningside Heights has hardly been traditional.

Born in Accra, Ghana, to a single mom, the talented Agyapong often played soccer with friends. One day, a man affiliated with Everton—an English Premier League team—saw him play, and wanted him to come to Everton with him.

“So this guy from Everton decided that it’s better if I come to school in the United States and I can play for Everton from time to time. And he lived in Connecticut, and so he found a school, St. Luke’s, in New Canaan, and the school gave me a family.”

Nancy and Tom Clark took him in along with their other kids. From this base, Agyapong, in hindsight, unsurprisingly was a very good soccer player during his high school days.

He led his team to the Pennsylvania State Athletic Conference semifinals, was named to the coaches’ All-State team three times, was invited to the Adidas Elite Soccer Program twice—some invitees turn professional immediately after attending—and helped his club team, Beachside, to three state titles as well.

While playing so much soccer, Agyapong did not forget his mother’s wishes. Despite English not being his mother tongue, he worked hard and was able to graduate from high school in two-and-a-half years. After being courted by many colleges, he committed to Wake Forest, a perennial soccer powerhouse under legendary coach Jay Vidovich, currently in his 19th season at the helm.

Although Agyapong was thrilled with the academics and athletics in Winston-Salem, N.C., he felt that his situation wasn’t ideal.

“It was fun. I liked it, it was great. But it was too far from home, which is Ghana, and far from here [the tri-state area], where my family is, my new family that I got,” Agyapong said. “I kind of wanted to be close to home, because not everything goes great in college. So when things get bad a little bit, you want to be able to reach your family and all that.”

Agyapong looked to transfer to the Ivy League, deciding that if he were to leave Wake Forest he should go to a school with top academics. Agyapong was attracted by New York City, but what really sold him was the culture of its team.

“I talked to my coach, [head] coach [Kevin] Anderson, and ... what really got me was how he really cares about your life outside of soccer,” Agyapong said. “He really does a good job letting you know that even though he brings you here for soccer, it’s not the most important thing, and I was really impressed by that.”

Agayapong was also impressed by the culture and dynamic. of the team itself. “Everybody gets along. It’s like too good to be true. We all care about soccer at one time, we all care about social life at another time, and then academics at a different time. So it’s like everybody’s on the same page all the time. I couldn’t even say no to an environment like that.”

The importance Agyapong places on family and friends comes through clearly to the people around him.

“First of all, Kofi is a great person, first and foremost,” men’s soccer head coach Kevin Anderson said. “I mean, he takes on a great role in our locker room and in our team, and I think he’s somebody that everybody loves and loves to be around. He’s always happy, he’s always making others feel good, he’s always worried about others more than he’s worried about himself. So his value in our team is immense.”

Agyapong credits his coaches, friends, and especially his family for bringing him to where he is today.

“I don’t know if there are many families who would do this for someone they don’t even know,” Agyapong said about the Clarks. “They do everything for me without me even asking.”

The Lions were very excited to bring him on board a year ago, and look forward to having him here through 2015.

“Kofi’s best days are still way, way ahead of him,” Anderson said.

And although professional soccer is certainly on his radar, Agyapong tries to enjoy the present.

“I play soccer because it’s fun. Not ‘I want to go pro,’ or anything; I play because that’s how I grew up. At the end of the day, it’s just you being happy.” sports@columbiaspectator.com