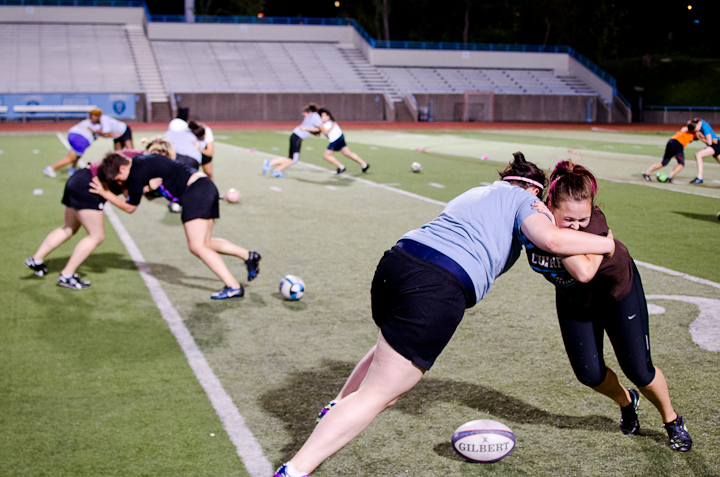 FIGHTING FOR SPACE Columbia's women's rugby club team has struggled to find practice space, and they have criticized the university's space allocation process.

With the many varsity and club sports at Columbia, sometimes finding practice space can be an issue. This was no more evident than last week, when one club team was left in the dark—literally. A new policy that prohibited clubs' use of Baker Field during the first week of the fall semester left members of the women's rugby squad with limited time to practice. With many varsity and club teams sharing the space, the policy signifies a larger problem regarding resources and recognition to some club players. "We have to book our own practice space way ahead of time, and even then, sometimes it gets messed up because of football games," women's rugby treasurer junior Sophie Lieberman said. "And we have to share with the lacrosse team for an hour a week out of our four hours. We don't have our own field, so during our preseason, the football team wouldn't let us go on their fields even though we were supposed to have it." But when the women's rugby team was finally able to get up to the tip of Manhattan to practice, the conditions were less than ideal, as unlike Motel 6, Facilities hadn't left the lights on for them. "Turning on the lights is often an issue," women's rugby coach Jodie van Ogtrop said in an email. "Most recently it occurred when we didn't have lights for our Thursday practice last week, and therefore we couldn't do the type of contact that the coaching staff had intended to do, so we lost another two hours of quality practice time before our first Ivy League game." According to Lieberman, the team called the club sports office that night and the office didn't know what to do. Yet for other club teams, the allocation and efficiency of resources is not an issue. Senior Josh Tobin, president of both the Club Sports Governing Board and men's rugby team, said the lights weren't on for his squad's practice either, but the problem was easily remedied. "It's happened a couple of times. Usually, it's just kind of a simple administrative oversight and it usually gets worked out in time for practice to start," Tobin said, adding that the lights were turned on within seven minutes after he made a phone call to Director of Intramural and Club Sports Brian Jines. Jines is charged with scheduling practice space for all club teams. The process begins when teams submit a recreation space request at the end of each semester and Jines assigns each team slots at the beginning of the following term. "The spaces that we do have obviously need to be shared by clubs, but I feel that the amount of times they normally want to practice are accommodated," Jines said. "I think they understand that they are privileged to be able to utilize the space that they're able to use. A lot of other club sports at other colleges and universities aren't allowed to use varsity fields." The need to share varsity fields comes partially from the constraints from Columbia College's position as a formerly single-sex school. "Columbia did not go co-ed until 1983, so really these facilities were built for one gender," Athletic Director M. Dianne Murphy said in a recent interview. "And so now all of a sudden, you have a small number of men's varsity sports and then, with no new facilities being built, we also added women's sports. We've got lots of people trying to do lots of things in our facilities, so we're obviously very crammed." Developing new facilities and resources for sports isn't easy, given the University's location. "Obviously, all clubs wish they had more practice space, but it's just the nature of the beast that is living in New York City," Jines said. "We don't have all the facility space that can be solely allocated to one club." For some club athletes, the schedule at Baker Field isn't exactly clear. One of junior Savannah Wood's duties as match-secretary of the women's rugby team is to submit the recreation space request to Jines, but she isn't sure who or what ultimately dictates allocating the space. "Brian's great, and I don't think it's up to him who gets what," Wood said. "I think it's higher in athletics or something like that. But it's really difficult for us to have consistent field space and the resources that we need to practice and play at the level that we want to be playing at." Still, many club athletes at Baker Field laud Jines for a tremendous job in scheduling club practices, while blaming the hierarchy of the athletic department. "I feel like maybe at Columbia, in terms of its larger pre-bureaucracy, poses the greatest challenge for club sport," Mike Escobar, president of the men's lacrosse team, said. "But I think that the club sports office really does a good job of doing what it can for the club sports in the greater Columbia bureaucracy." But what really might be missing from the process is communication between all the parties involved. "I think both the University and the women's rugby team could benefit from a meeting where we discuss the issues we both face in terms of the field space allocation, among other things," van Ogtrop said. "I feel the lack of communication about these issues is a hindrance to our progress as a team, and having an opportunity to discuss our concerns with the people who make the final decisions may go a long way towards helping us understand the university's decisions. "Until we open the lines of communication, we'll likely continue to feel that our concerns are being ignored, even if that isn't anyone's intent," she added. sports@columbiaspectator.com