To jargon or not to jargon

To jargon or not to jargon 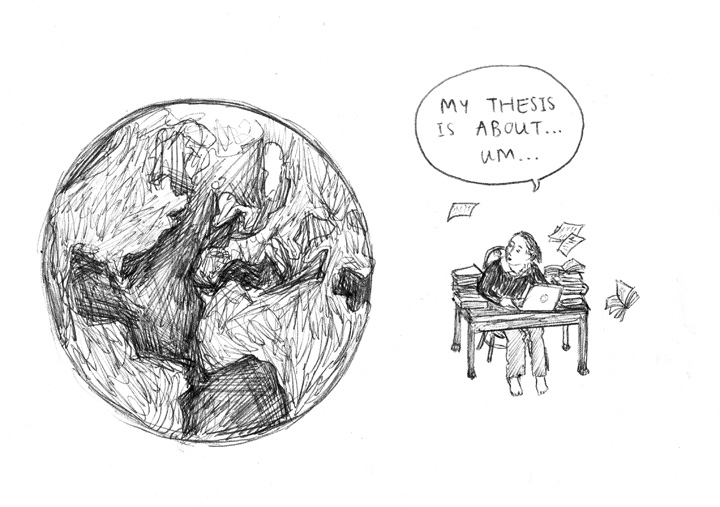 I stayed in New York City this summer to research my thesis. There were some failed attempts to secure one of those coveted and unpaid but resume-building positions as well, but that's another story. To explain my presence in Manhattan to those who asked, I would generally say that Columbia's library resources and the city's vast array of coffee shops were conducive to my research. Inevitably, this other person, whether it was someone whose apartment I was considering for a sublet or my boss from my work-study job, would ask the question: So, what's your thesis on? "Oh, it's kind of obscure," I'd hedge. "It sounds obnoxious." Seeing that they were still looking at me expectantly, I'd realize I had to go on. "Well," I'd say, "it's on the relationship between gender and urban space in a modernist Japanese novel from the 1920s." And the person I was talking to would usually nod, or smile, or in the case of one grad student, say, "Oh, that's cool! It's one of those typical liberal arts theses. I wrote one of those too." And that would be it. Even in a liberal arts context, however, I sometimes feel as though my thesis is conforming to a type. When I presented my research to my fellow EALAC and AMEC majors, I was the only person in my section using phrases like subversion of norms and heterosexual matrix. Listening to the other well-constructed but largely jargon-free presentations of plans for original sociological research or economic investigations, I felt uncomfortable, almost ashamed of the proposal I'd spent three months planning and writing. Specialization is an inevitable step in any undergraduate's career, but when we immerse ourselves in our own niches in our respective fields, it also serves to divide us. As our majors and research become central to our lives, they can also act as conversation barriers with anyone but our fellow specialists. Naturally, jargon leaps out as a major feature in this divide. Specialization comes with its own language, a whole new vocabulary, no matter the field. If someone were to come up to me and start speaking in the language of applied physics, they might as well be speaking Russian. The jargon of literary and cultural criticism is particularly maligned, as it tends to take relatively simple words and put them through gratuitous grammatical transformations, such as "problematization." This is one of the reasons that people tend to either love, hate, or (as I do) have a love-hate relationship with theory. Using jargon can be exhilarating, a guaranteed pump-up for any mundane in-class comment even when you aren't entirely sure what you're saying. However, it can also include the subtext of "I'm smarter than you" or "I'm more knowledgeable than you," especially when used outside of the classroom. This seems counter to the goal of toppling hierarchy that much of cultural criticism advances. Can the subaltern speak? If so, probably not in jargon. I can't speak for the applied physics or environmental ecology or electrical engineering majors. Their jargon may have fewer issues, or different ones. But in the humanities, at least, we should build bridges between language and reality when discussing abstract concepts. It's all well and good to talk about the revolutionary aspects of a text within the classroom, even to identify the relationship of literature and other entertainment culture to politics and science. However, if we continue to barricade ourselves behind jargon, theory remains merely, well, theoretical, the exclusive property of academics and critics. For true change, any kind of change, to happen, we should make more of an effort to breach divisions rather than to erect them. Toning down the jargon, or clarifying it, is one way to do that. And though it may not be possible to mobilize humanities majors to reconnect with the streets tomorrow, we can start conversations with our fellow students and others around us. By self-consciously dismissing my thesis topic, I've been essentially telling the people I talk to that they wouldn't understand. If I made an effort to explain beyond my perfunctory one-sentence summary, people would probably understand more than I assumed they would. And perhaps I would even understand your biochemical engineering research. To some extent, anyway. One of the best things about beginning an undergraduate education is the ability to dabble in as many different areas as we can. When we begin to specialize, as rewarding as the feeling of becoming expert can be, too often we stop dabbling. However, to veer dangerously toward theory-speak, much of the difference between academic fields is constructed. By probing deeper into conversations with those in different fields of study, we can find connections we didn't know existed and can continue the process of dabbling, even while writing a highly specialized, liberal-artsy thesis. Cecille de Laurentis is a Barnard College senior majoring in Asian and Middle Eastern Cultures. Modest Proposals runs alternate Fridays. To respond to this column, or to submit an op-ed, contact andrea.garcia-vargas@columbiaspectator.com