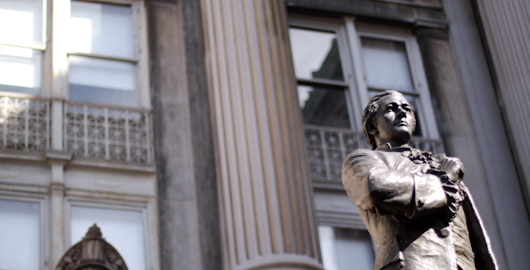 At 3 a.m. on Wednesday, Columbia opened registration for its first two massive open online courses. The University is offering the two courses—Financial Engineering and Risk Management, and Natural Language Processing—through Coursera, an online education platform founded by Stanford University professors Daphne Koller and Andrew Ng last year. It's Columbia's first major venture into the online education market in a decade. "We're doing a pilot program in the MOOC stage—massive open online course—and the idea there is to see the potential of the MOOC stage for education," said Sree Sreenivasan, who was appointed Columbia's first chief digital officer in July. "What I'm trying to do in my position is to help see what's working, try new things, and to expand and enhance what we've already done and built at Columbia." Sreenivasan said that several Columbia schools, including the School of Continuing Education, the School of Engineering and Applied Science, the School of Journalism, and Teachers College, have had assorted online education offerings for years. But this is the first time Columbia is offering courses that are free and open to anyone in the world with Internet access. Both courses will begin on Feb. 11, 2013, and run for 10 weeks. According to descriptions on Coursera's website, the workload for each course will be eight to 10 hours per week. Industrial engineering and operations research professors Garud Iyengar and Martin Haugh will teach Financial Engineering and Risk Management, and computer science professor Michael Collins will teach Natural Language Processing. "The plan is to give people a broad introduction into the method of financial engineering and risk management and option pricing for portfolio optimization and also a healthy degree of skepticism," Haugh said of his course. "Obviously, these models have come under a lot of criticism in the last few years ... so we hope to address some of these issues as well." Thirty-three schools—including the California Institute of Technology, Duke University, and Princeton University—currently offer or are planning to offer classes on Coursera. The more than one million people who have enrolled in the site's courses are expected to pay attention during video lectures interspersed with interactive exercises and complete homework assignments in between lectures. Kyle Rego, SEAS '13, called Columbia's new online courses a "fantastic opportunity," noting that he is currently enrolled in the in-person version of Natural Language Processing. "If I didn't have the opportunity to go to Columbia I would definitely take a course" online, he said. "I could easily see other people wanting to." "For free, this is amazing," he added. However, Ben Rashkovich, CC '15, said that the whole concept of online education is "on an uneven keel," as it benefits some academic disciplines more than it does others. "I feel like it will impact the sciences and math much more than writing or literature," he said. Sreenivasan said that the long-term goal of creating massive open online courses is "to enhance the undergraduate as well as graduate experience at Columbia." He said there are three groups of people that the University hopes to reach through Coursera: students who live on campus, students who don't live on campus or who are studying abroad, and people not affiliated with Columbia. "It's obviously very experimental," Haugh said. "All the universities who are doing this are exploring this platform to some extent, trying to figure out just how much teaching can be done via these platforms and to see whether or not they'll be viable in the long run." Rego said that it's "awesome but kind of scary" to think about online classes in the long term. "If it gets popular enough, it could really alter the educational landscape, such that a lot of kids might decide to take online classes as opposed to going to private colleges and having a lot of debt through loans," he said. Sreenivasan noted that he is still exploring options for pilot courses and that more may be added for the spring. More than 6,000 students had enrolled in the first two courses by Wednesday evening. "It's very exciting," Haugh said. "I think there's a chance for us to reach a lot of people this way." lillian.chen@columbiaspectator.com Correction: A previous version of this article stated that Kyle Rego planned to enroll in Natural Language Processing through Coursera. Rego is actually enrolled in the in-person version of the class this semester. Spectator regrets the error.