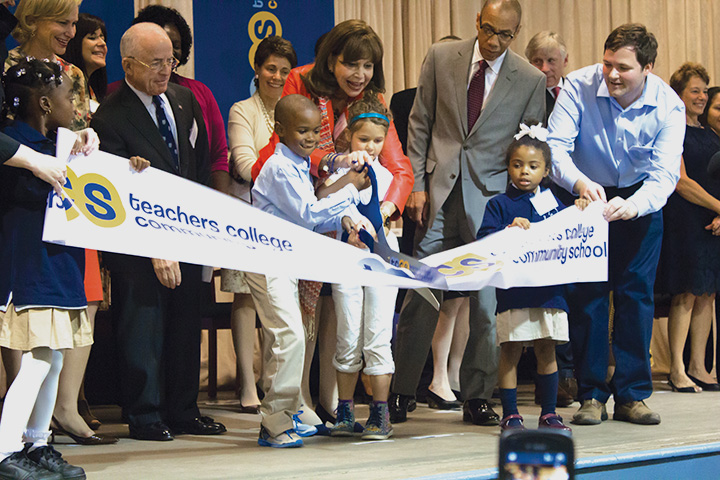 A host of high-profile politicians and educators gathered Thursday to celebrate the official opening of the Teachers College Community School, but it was the smallest members of the audience who received a standing ovation. The school opened in a temporary location last year, but it has now moved to its permanent home. Columbia's agreement to help found the school was seen as one of the most important commitments it made in the 2009 Community Benefits Agreement—which it signed with neighborhood leaders to earn their support for its expansion into Manhattanville—and Thursday's event marked the fulfillment of that commitment. After celebratory speeches by several Columbia officials and local leaders—including University President Lee Bollinger, Community Board 9 Chair Rev. Georgiette Morgan-Thomas, and West Harlem Development Corporation board chair Donald Notice—a group of 50 first-graders took the stage and elicited "awws" with a rendition of "What a Wonderful World." The applause filled the gymnasium at the school's new facility on Morningside Avenue between 126th and 127th streets. "It's been five years in the making, and I've had interactions with and worked with and planned with and struggled with so many different issues," said Nancy Streim, associate director for school and community partnerships at Teachers College. "And all of the people that are here today have been involved in one way or another, so it's just a gratifying moment to have everyone here to celebrate what we've accomplished." Many speakers at the event said the school's collaboration with Columbia has been a key to its success. Columbia and Teachers College support the school financially and administratively, and TC professors and students develop enrichment programs for its students. Streim will continue to strategize for the school's growth and coordinate the involvement of TC faculty and curriculum development. Columbia's relationship with the community has at times been strained, and many have criticized the West Harlem Development Corporation for a slow rollout of the promises of the CBA. But none of that tension was evident on Thursday, with Morgan-Thomas praising the school for honoring "the spirit of the Community Benefits Agreement." "This school illustrates the value of collaboration and the triumph of partnership," Morgan-Thomas said, noting that Community Board 9 has been included in student recruitment procedures and that a CB9 representative is part of the school's leadership team. The event was also attended by City Council member Robert Jackson and TC president Susan Fuhrman. The school's principal, Jeanene Worrell-Breeden, said she was "amazed and gratified" that so many political figures and University officials turned out for the event. "It's great to move into our permanent home," she said. "It's a building we can grow into." Speaking to the audience, Bollinger described the school as a symbol of the University's partnership with the surrounding community. "We believe in community relations," Bollinger said. Teachers at the school said that a spirit of collaboration colors its day-to-day environment, too. "The resources are endless. We feel we have a lot of support," said Sheree Raho, a special education teacher at the school. Parents said that they felt very included by the school's faculty. "I just feel really happy. This is really great," said Khadija Fall, who has a daughter in first grade at the school. "The principal really works with us to take care of our children the way we want them to." Soukeyna Gueye, who also has a daughter in first grade, agreed that the school was supportive. Because Gueye's other child attends a different public school, she can "see the difference" between this school and other public schools. "Here everything is very structured. You know what your child is doing, when, and how," Gueye said. "They respect the parents very much." Fuhrman, TC's president, said that TC plans to establish partnerships with 12 additional Harlem schools by 2015. But she called the establishment of this school "a great first start." "I couldn't be happier. It is a dream come true," Fuhrman said. "I cried when the children sang." Jackson praised the school but said that these steps alone are not enough to remedy education issues in West Harlem. "Everyone wants an excellent education for their children," Jackson said. "These parents, these children, are the lucky ones. It's a small amount compared to the need." Streim agreed that the improving education in West Harlem is central to the mission of the school. "What really motivates me is knowing that this community has a great public school, a community that hasn't had as many great public schools as they would like, that we're going to have an impact on the children," Streim said. emily.neil@columbiaspectator.com