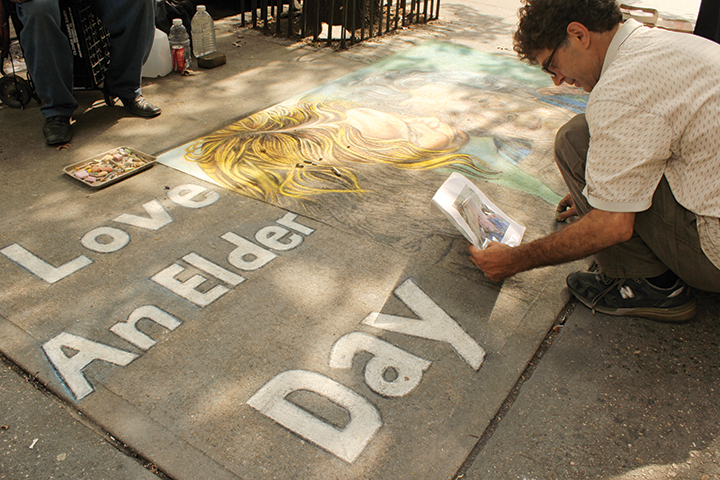 On Thursday afternoon, Hani Shihada held a piece of gold chalk and filled in the blonde hair of Erin Broad on the sidewalk at the corner of 113th Street and Broadway. In the portrait, Broad has her arm around Dolores Saborida, an elderly woman who recently died. "We forget about them," Shihada, a well-known New York City sidewalk artist, said. "It seems like young people don't care for the old. They want something new. If it's old, it's expired. They forget the old people." Despite that, he said, "There's so much to learn from them. We're nothing without them." Shihada was commissioned for the portrait in preparation of Love an Elder Day, a neighborhood effort to turn the spotlight on seniors on Oct. 1. A series of special events for the elderly—capped off with a luncheon at Le Monde for 75 area seniors—were organized by Morningside Village, a local group whose programming caters to elderly residents in Morningside Heights by pairing them up with volunteers, including Broad, the sidewalk drawing subject. Although Morningside Village's goal is to turn all eyes on the elderly, one of the group's main motivations behind the project is the difficulty of fostering awareness of an older generation in a neighborhood heavily populated by 20-somethings. Patricia Gatling, commissioner of the New York City Commission on Human Rights, noted that this makes older people "hidden individuals in our city." "It'd be very nice if students were more aware," Gatling said, "Students may not be paying attention, but elders are the ones sitting on benches and paying attention to them. They may know more about them than some of their peers do." She added that simple gestures, like offering to hold someone's shopping bags, "make a big difference." To coincide with Love an Elder Day, Westside Market will include cards in grocery bags on Saturday encouraging locals to help out their elderly neighbors. Rajeswari Murty, TC '73, who has two volunteers walk her to Morton Williams every week to buy groceries because she can't walk, will be featured on neighborhood advertisements. At a reception Thursday evening to launch the project, State Assembly member Daniel O'Donnell presented a signed proclamation from his office officially recognizing Oct. 1 as Love an Elder Day. The organizers quickly dispensed with formalities, as attendees of all ages—from the elders to a dozen Columbia student volunteers—cheered on 95-year-old Dora Bardach as she belly-danced to the music of an Iranian tar. A graduate of Teacher's College, Bardach taught dance and music at P.S. 165, on 109th Street, for 40 years. She believes that young people "should learn to understand what motivates elderly people." "A lot of elderly people need love," Bardach said. "They need love and understanding. Everyone in the world needs that compassion." Fanny Steinhauser, who has known Bardach for 40 years—and followed her friend with a performance of her own—agreed that the celebration will help young people learn how to better communicate with the elderly. "It's something you can't learn," Steinhauser said. "You have to have goodness and compassion to give your time and not feel like you've wasted your time or could have been doing something else." Brian McGrattan, SEAS '15, became involved with Morningside Village through the Columbia rowing team. McGrattan was one of a few first-year rowers to volunteer for the program last year, and he spends three hours every week with Morningside Heights resident William Wood, who is 88. "There are a lot of challenges that we take for granted, and it's tough for them," McGrattan said. "He's lucky because his daughter still lives in the building, but she can't be there all the time. Sometimes we walk to Nussbaum and we get pie and play Chinese Chess." McGrattan said that he takes notice of elderly people around Columbia more often since he started volunteering. Geovanna Carrasco, BC '12, an intern for Morningside Village, brought members of the Columbia/Barnard chapter of Kappa Phi Lambda to the reception to serve beverages and hors d'oeuvres to the guests. "I never realized there were elderly people in Morningside Heights" before working at Morningside Village, Carrasco said. "I never left my bubble. I think we are not seeing around us—we're focused on ourselves. We forget to acknowledge those that have come before us." Irene Zola, who founded Morningside Village and Lifeforce in Later Years, a national organization, said that "giving back for intangible things" is part of the appeal for the young volunteers. "Students have their friends, but there's value in those that can give us some of their wisdom, especially their encouragement," Zola said. "They're developing a world where someday they'll be 92." jillian.kumagai@columbiaspectator.com Correction: An earlier version of this story reported that the proclamation presented by State Assembly member Daniel O'Donnell was from Mayor Michael Bloomberg and the City Council. In fact, it was from O'Donnell's own office. Spectator regrets the error.