Students oppose Barnard pool closure, slated for May due to budget cuts

Students oppose Barnard pool closure, slated for May due to budget cuts 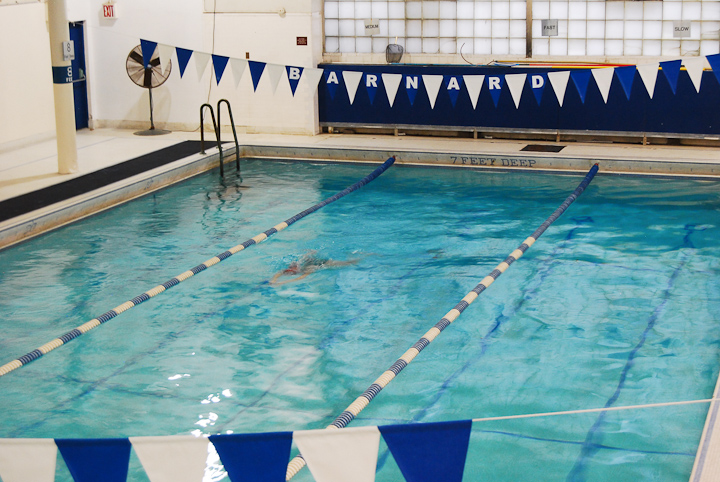 Students say the Barnard pool, set to close in May, is a valued campus resource.

With Barnard's swimming pool set to close in May, a student-led initiative to save the pool is gaining momentum. Administrators are planning to close the pool to save money and to provide temporary office space for faculty and staff who will be displaced by major campus renovations. But Save the Barnard Pool, a nascent campaign spearheaded by Jordan Alam, BC '13 and Mel Meder, BC '14, is working to change those plans. "I hope that as we talk to the administration, and in working with them that we can negotiate this through," Alam said. "It depends on their willingness to work with us." Barnard has been faced with a small operating deficit three of the last five years—last year, it was about $5 million—which has led administrators to push for across-the-board budget cuts. Chief Operating Officer Greg Brown told Spectator in April that closing the pool would save the college approximately $3 million in deferred maintenance costs. Some students, though, have not taken kindly to proposed cuts, including the closing of the pool. Closing the pool would force Barnard students to use the pool at Columbia's Dodge Fitness Center, an environment that some Barnard students say is intimidating in part because it is a coed facility. Madison Lang, BC '13 and the head lifeguard at Barnard's pool, noted that Barnard also reduced its physical education requirement from two semesters to one semester in the spring. Lang, who is involved in the save-the-pool campaign, said that while "it's understandable that the administration's trying to cut costs in certain ways," she doesn't think the cuts should come "at the mercy of students' wellness and health." "Our options for wellness and fitness are just getting smaller and smaller, and it's becoming clearer that women's health and wellness isn't as important to the administration as it should be," Lang said. But even if students can convince administrators that closing the pool is not the best way to save money, it might not matter. Barnard is planning major renovations to Barnard, Lehman, and Milbank halls, and Barnard President Debora Spar told Spectator that the economics, history, and political science departments, as well as the library, will need a new home while Lehman is renovated. "The only swing space we have is the area currently known as the pool," Spar said, adding that three stories of office space will be built at the pool site. Student Government Association President JungHee Hyun, BC '13, said that while she doesn't know if the save-the-pool campaign will succeed, "it is going to voice that students care about the general topic of wellness." "This is beyond the pool that needs to be saved," Hyun, who has attended Save the Barnard Pool meetings, said. "I sense that students are frustrated that certain programs and core things from Barnard's mission are being lost from decisions being made." Hyun added that the SGA, as a liaison between students and the administration, cannot take a side on the pool issue. But she has said at SGA meetings that the council will do its best to help frustrated students communicate with administrators. Save the Barnard Pool has held two meetings so far. Alam said that in addition to convincing students to express their frustration at administrators' office hours, she wants to get more students to swim in the pool, to show administrators that it's a valued resource. The Barnard pool offers women-only swim hours, which Columbia's pool does not. "I think if they don't provide women-only swim hours in Dodge, that's completely removing the possibility of swimming to a huge group of our students and alumni, and it's not fair," Lang said, noting that many women won't swim with men due to religious modesty practices. "It's not fair to deny them the ability to swim." Additionally, Meder said she's particularly invested in keeping Barnard's pool open because it's shallower than Columbia's pool, which helped her to conquer her fear of swimming. "It was really reassuring to have that shallow end extend for most of the pool, and I was able to sort of on my own push my limits in a way that would not have happened at the pool in Dodge," Meder said. Alam is also trying to reach out to Columbia students who swim in the Dodge pool to find out how they would feel about sharing their already crowded space with even more students. She said that while the campaign may not be enough to stop administrators from closing the pool, it will send a message to them that administrative transparency is a major student concern. "Even if nothing happens, it makes a statement to the administration that they have to at least tell us of their dealings and what they have chosen to do in advance. Even if the pool does end up closing, it's important for us to make that statement that we dislike this and it's not something that we are just going to have it roll over," Alam said. "Because that means that they can also roll over on us for housing stuff this year and meal plan stuff. It's like dominoes." emma.goss@columbiaspectator.com