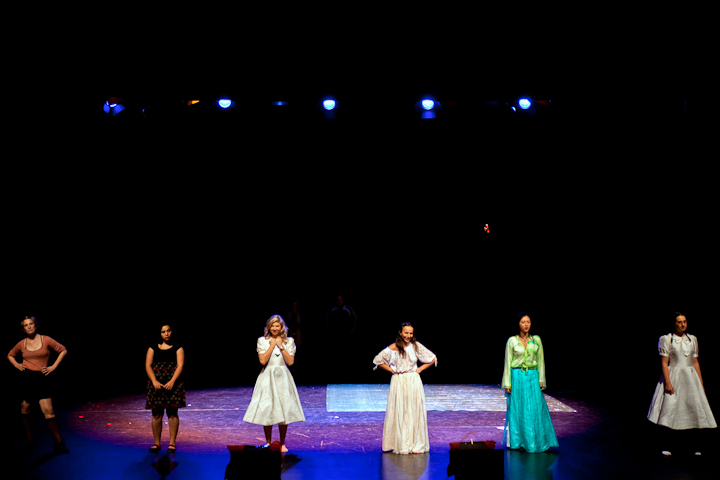 Sarah Eismann performs with the 6 Helenas (German, Palestinian, American, Romanian, and Chinese) in Folkwang Universitys production of A Midsummer Nights Dream in Essen, Germany, which inspired her current project.

For the all-female Shakespeare company Manhattan Shakespeare Project, all the world really is a stage­ for cross-cultural communication. MSP's newest project, "Shakespeare For A New World: The Palestinian Voice," is centered on the creation of original theatrical pieces that will incorporate Shakespeare's sonnets and Palestinian youth songs. Teaching artists Sarah Eismann, SoA '12, and Jensen Olaya, SoA '12, will travel to Palestine in late November, accompanied by documentary film director Lena Rudnick, SoA directing candidate, to work with students at the Drama Academy Ramallah and the Jenin refugee camp's Freedom Theatre. Eismann said that although "Shakespeare For A New World" and MSP are not political entities, projects "have the potential for having political undertones" by nature of the fact that MSP is an all-female company traveling to a region often associated with more rigid patriarchy. But the purpose of "Shakespeare For A New World," above all else, is for Eismann and Olaya to work with the students at the Drama Academy Ramallah to create theater and art. Due to their geographical location, the Palestinian theater students are extremely isolated. The project will "help get their voice outside of the borders of Palestine," Eismann said. The concept of "Shakespeare For A New World" emerged after Eismann performed in an international production of "A Midsummer Night's Dream" that took place in 2011 at the Folkwang University of the Arts in Germany. The "Midsummer" cast was comprised of acting students from Folkwang, in addition to students from Columbia, the Drama Academy Ramallah, the Shanghai Theatre Academy, and the Lucian Blaga University of Sibiu. Eismann said that she was inspired by the beauty of "a Palestinian Helena working with a Romanian Demetrius." Shakespeare's words, she realized, could effectively cut across cultural and linguistic barriers. "We found our common world. We found our common language," she said. The Folkwang production, Eismann said, led to an epiphany. "If only the world could work this way, we would have no problems," she said. "It wouldn't be me against you—it would be what was on that stage." Eismann was thrilled when the Drama Academy Ramallah's director invited her to teach the "Shakespeare For A New World" workshops and make this vision of "a completely united, holistic, humanistic world" more of a reality—at least in theater. As time went on, the project gained momentum and "exploded into this very idealistic, very grandiose plan." The intense, six-hours-a-day workshops will include not only actors from the Academy but also teenagers at the Jenin refugee camp, which is one of the oldest, most devastated refugee camps in Palestine. With the help of a team including Rudnick, these workshops and the performances that result from them will be filmed. In the next five years, Eismann hopes to take the methodology that the MSP team learns from the Ramallah and Jenin workshops and bring it to high school students in New York. The end goal, she said, is to get diverse communities across the globe to learn about each other, "to use Shakespeare to talk, to create theater, to create peace." arts@columbiaspectator.com