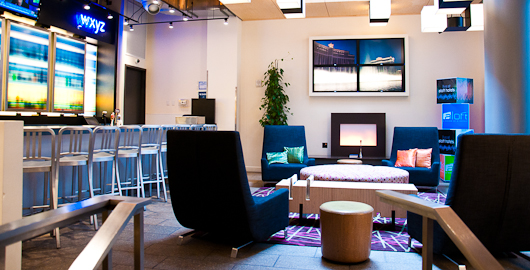 The w xyz lounge at Aloft Hotel is a symbol of gentrification along Frederick Douglass Boulevard in West Harlem.

A handful of homey restaurants and beauty shops line the avenue, but it is hard not to notice the presence of chains along Frederick Douglass Boulevard—including an Old Navy, a Ricky's slated to open temporarily in the coming months, and the Aloft Harlem, a high-end hotel catering to the growing tourism in the area. The Aloft, a division of the W hotel chain, set up its Harlem branch in 2010—the first hotel to open in Harlem after the last one closed 40 years earlier—and for better or for worse, it's having a marked impact on the neighborhood it joined. On one hand, the 124-room luxury hotel at Frederick Douglass and 124th Street has brought thousands of overnight guests to Harlem—35,000, by the count of general manager Daniel Fevre. "If there had been no Aloft, there would have been nowhere in Harlem for them to stay," Fevre said in an email. The hotel actively refers guests at Aloft to businesses in the area, Fevre said, and many local business owners said the hotel has increased traffic into their stores. "Because of the hotel, tourists come to shop even more. It's great for business," Julissa Peralta, manager of Danice, a local clothing store, said. Martial Gnago, manager of the clothing store Harlem NYC, nearby on 125th Street, agreed. "It's easier for people to shop and find what they need here," Gnago said. "They don't have to travel to another area of town." Determined not to disrupt the fabric of the community, Aloft is trying to think local, Fevre said. The hotel is an active member of many community programs, such as Harlem Park to Park, the Harlem Art Alliance, and the Promotional Alliance of Harlem, which showcase Harlem's culture. Through the city's Summer Youth Employment Program, the hotel hired eight teenagers in 2011 and 16 this past summer, according to Fevre. But when big businesses rise up side-by-side with small businesses, many residents say that the character of the neighborhood is lost amid the shuffle. Apartments sell for upwards of $1 million, a price unheard of for Harlem residents a decade ago. Aloft "has elevated the neighborhood, and made it a lot more diverse," said Whitney Ferguson, a retail buyer who grew up in Harlem and now lives in the Bronx, but at the same time, neighborhood traditions like block parties have disappeared. "There used to be a family day every year where people who lived here as kids came back. The whole block was blocked off," Ferguson said. "Now they can't get permits to get a block party." Barnard urban studies professor Susan Fine said that the development in Harlem was bound to happen eventually. "If it wasn't Harlem, it would have all happened a very long time ago," Fine said. "They have the transportation network and the architecture. I'm surprised that it hasn't gentrified faster." That gentrification hits home hardest for Harlem's longtime residents. Crystal Jones, a receptionist at the New York Sports Club across the street from Aloft, lives in Grant Houses, a housing development on 125th Street and Amsterdam Avenue. "More things are getting more expensive," Jones said. "Rent is going up. There are more high-end things, but we can't afford them." As a new look comes to Frederick Douglass Boulevard, so do new people. "I went to a private high school, and in high school my boyfriends didn't want to come here," Ferguson said. "Now they live here." The influx of tourists, who come to visit the Apollo Theater and the neighborhood's historic churches, drives up prices, too. "A lot of renovation—more condos and whatnot are being built," Jones said. "It's not what it used to be." news@columbiaspectator.com Correction: An earlier version of this article characterized the Old Navy on Frederick Douglass Boulevard as a recent development, when it has been around for several years. It also implied that the Ricky's would be a permanent addition, when it will be a temporary store. Spectator regrets the errors.