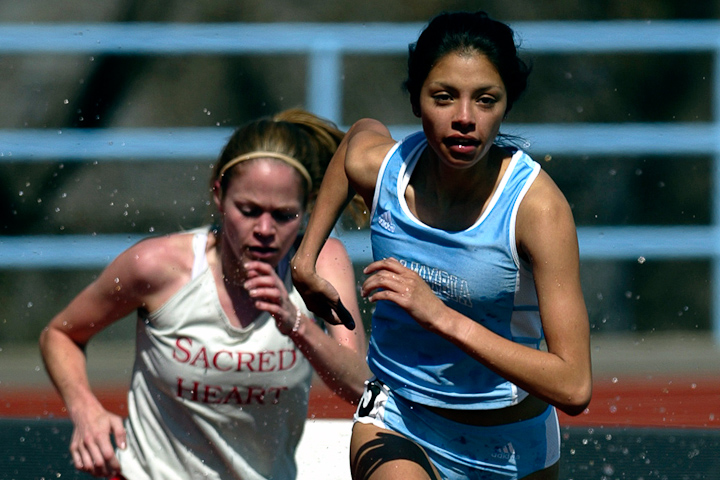 Former Lion Delilah DiCrescenzo, CC '05, is not just known for her impressive record as a former member of the Light Blue's track and field team—she's actually had a hit record written about her. Don't let the song fool you, though, this Delilah has done a whole lot—and not just in New York City. DiCrescenzo has represented Team USA at the IAAF World Cross Country Championships, been sponsored by Puma, been to the Olympic trials, volunteered as an assistant coach for Columbia, and has even attended the Grammys. But, for better or worse, she was the muse for the song "Hey There Delilah" by The Plain White T's. It's a source of both pride and embarrassment for her. "I'm definitely proud of it," DiCrescenzo said. "I know it's definitely something that's going to follow me around whether I like it or not, so I better embrace it—which I've definitely become better at doing," DiCrescenzo met the song's writer, Tom Higgenson, through a mutual friend while at a concert in Chicago in 2003. While admitting the song was a "nice kind of dimension to have," she went on to explain that the song did not feel as personal as it seemed, as she barely knew Higgenson. DiCrescenzo did, however, get to attend the 2008 Grammys, where the song was nominated for Song of the Year. "It wasn't an ode or a love song as much as it looked like," she said. "It doesn't really feel so personal to me. It just seemed really peculiar and curious, but fun nonetheless." Of course, inspiring a song was not DiCrescenzo's only accomplishment while at Columbia. During her time in Morningside Heights, DiCrescenzo competed in various track events, focusing mainly on the steeplechase. "My favorite race that I've ever seen her run was at the Ivy League freshman year," DiCrescenzo's former coach, and now colleague, Willy Wood explained. "The first time they had the steeplechase­—and she won the meet very convincingly—you could tell from that point on that something sparked within her and she got very excited about running." DiCrescenzo, too, has fond memories of that race. "I remember coming off of that race being so energetic because I exceeded what I thought I could do," she said. "I had no expectations, I just went out there and ran." Something must have sparked within her, as she still holds records of top performances with the Lions. She also helped lead one of the most successful periods in Light Blue cross country history, with five straight Ivy League Championships and Top-25 national finishes from 2000-2005. "It was an amazing experience for me," DiCrescenzo said. "It's why I continue to be involved with the program. It's given me a lot of opportunities to develop as a whole person and set me up in my professional career." After graduating, she coached for a short time at Bryn Mawr and then came back to help as a volunteer assistant coach at Columbia while she worked on her masters degree in sports management. Due to her own training schedule, DiCrescenzo isn't as involved with the Lions as she used to be, but she does occasionally help the team out. She believes that she's gained a lot from working with the Lions, saying that they provide her with team spirit that reminds her of her own passion for the sport. DiCrescenzo is also one of the few American runners to be sponsored by Puma. As a part of her sponsorship, she has done some "unique marketing campaigns" that included a web series last year, which can now be found on YouTube. "It offered an inside look into the life of a professional track athlete, which was something that was previously missing—for the fan, at least," DiCrescenzo said. DiCrescenzo has a record of representing Team USA. After representing USA multiple times at the IAAF World Cross Country Championships and at the Americas Cross Country Championships, she also tried to make the Olympic team. She admitted the Olympic trials were a little disappointing due to a recent injury that prevented her from running her best. There is still some hope for a future Olympics possibility, but she says her "vision is much more short-term than that." But even if she never makes it, she'll always be "Hey There Delilah." sports@columbiaspectator.com