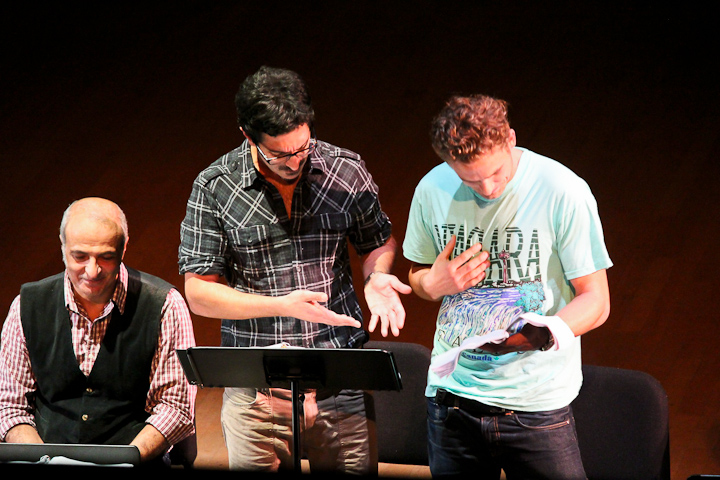 Billed somewhat humorously—though by no means inaccurately—as a "tragipoliticomedy," Ismail Khalidi's play "Tennis in Nablus" delivers a thoughtful and pointed political argument while eliciting roars of laughter from the audience. Khalidi's visceral depiction of human struggle allows him to illustrate complex themes, giving viewers a deeper insight into the complexities of today's Palestinian situation, so rooted in the country's chaotic history. Film professor James Schamus introduced Thursday's staged reading of "Tennis in Nablus" at Miller Theatre by noting Khalidi's artful combination of the personal and the political. Cosponsored by the School of the Arts, the Heyman Center for the Humanities, and the Center for Palestine Studies, the reading delivered a potent, punchy critique of imperialist policies toward the Middle East and presented a touching tale of Palestinians' attempts at resistance and reclamation. Set in 1939, just as World War II is beginning in Europe, Khalidi's play focuses on a Palestinian couple torn apart by the British occupation of their country. Distraught at the degradation of his people's honor and the loss of his family's land, protagonist Yusef attempts ingeniously and violently to resist the occupation. Meanwhile, his wife, Anbara, pseudonymously writes inflammatory articles critiquing the British. Khalidi's Palestinians are not opposed to the presence of Jews in Palestine, but rather express concern about the intrusion of "Europeans" on their land. They maintain that the Jewish settlers are not like their own Jews, and they fear a day when Jews will own their own homeland. While the play does not present a Jewish perspective on the situation in the Middle East, it is remarkably sympathetic. The play's lone Jew makes brief but memorable appearances, and he is ultimately granted a moving monologue in which he expresses his love for Palestine and its people. "There will always be reactionaries," he says, but most Jews seek peace and mutual understanding. The villains of the play are not the Jews, but the British. Sinister, even in their incompetence, the British Lieutenant Duff and General Falbour happily set aside their brutal repression of the Palestinian resistance for days at a time to make time for tennis matches and costume parties. Meanwhile, O'Donegal and Rajib, two conscripted soldiers (Irish and Indian, respectively), insubordinate at every opportunity, make no attempts to hide their disdain for their superior officers and for the British imperial project. They provide wonderful comic relief, and show that the play's central argument could extend easily to any part of the developing world. More dramatic than the scarcity of Jews, however, is the remarkable shortage of women. The gender imbalance of the cast is made particularly obvious by the staging necessary for a reading: one woman sits onstage, alongside 10 men. Yet the one woman, Anbara, receives the most intricate portrayal of any character. And it is her pamphleteering, rather than her husband's pugnacity, Khalidi suggests, which ultimately undermines the position of the British in Palestine. Westerners have themselves to thank for today's Palestinian mess, Khalidi suggests, implying that American imperialism is just as unwelcome today as British imperialism was 70 years ago. "Will we be able to get back what we've lost?" Yusef asks at the play's climax, reminding viewers of imperialism's tremendous toll. "Tennis in Nablus" inspires laughter and tears­—and the frequency of the former serves masterfully to ensure the efficacy of the latter. arts@columbiaspectator.com Correction: An earlier version of this article misstated that the opening remarks made by Brinkely Messick, not James Schamus. Spectator regrets the error.