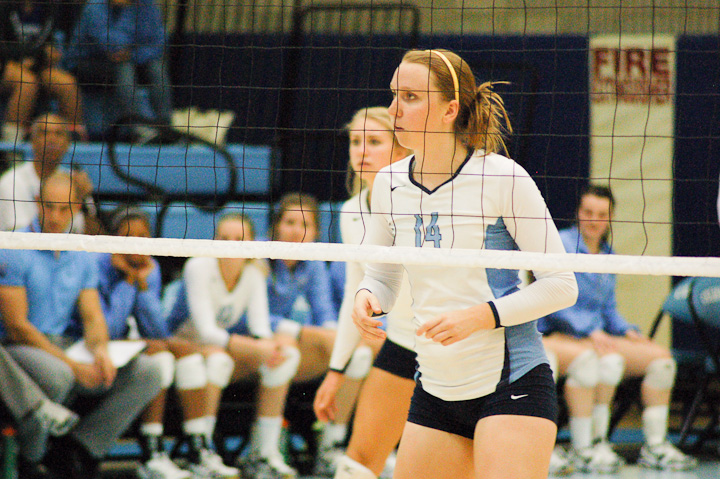 When senior captain Megan Gaughn goes up to hit, her eyes follow the volleyball, tracking the trajectory of the set. But at a certain point, she takes her eyes off the ball completely. In that moment, Gaughn glances at the other side of the court, looking for holes in the block and the defense, and then brings her eyes back to the ball right before she crushes it, hitting the ball right where the defense isn't covering. This all happens in two seconds. Gaughn's uncanny ability to seemingly slow time as she hits the ball has allowed her to reach a significant milestone. She's now the first player in program history to record over 1,000 digs and 1,000 kills in her career. But while the two-time first team All-Ivy honoree led her team to back-to-back third-place finishes in her sophomore and junior years, Gaughn said she came to Columbia during a rough time for the volleyball program. Gaughn recalls how ecstatic the Lions were when they pulled out a win early in her first Ivy season. "One of the seniors gave me the biggest hug ever," Gaughn said. "You have no idea—it was her first Ivy League win of her career here." Those moments helped offset the reality that Gaughn had joined a struggling program that had gone 0-14 in the Ivy League in 2008, and had won only a total of five Ivy matches over the previous three seasons. According to Gaughn, there was even a point when associate head coach Brie Katz had to ask a girl from the P.E. volleyball class to join the varsity team, just to be eligible to play games. The impact of Gaughn and her recruiting class on the program was felt immediately, as the Lions jumped up to sixth in the conference with three wins. But the Light Blue had almost missed out on Gaughn. It was only after her initial plans to play for Harvard had fallen through that then-second-year head coach Jon Wilson capitalized on the chance to pick up a talented player. "I have no idea how he got me to come here," Gaughn said. "Obviously I came to college with the intention of winning. I'm not down to lose every set. He talked about how he was going to turn the program around and got us to buy into it." As a member of his first recruiting class, Wilson said, Gaughn was instrumental to the development of Columbia's volleyball program. "She has been a cornerstone type of player," he said. "She's the kind of player that's talented and who works and who overachieves. And that's a nice combination to have. And she's a nice person on top of that." Beyond improving the team on the court, Wilson also credited Gaughn, along with her teammates, for convincing other talented volleyball recruits from around the nation to buy into his vision for the Light Blue volleyball program. "They believed so strongly that Columbia was going to be competitive and it was a great place to invest your four years if you were a volleyball player," Wilson said. Gaughn took a leadership role on the team at the start of her tenure at Columbia. Freshman year, she set the example mostly through her play, and over the years she's developed into a more vocal leader, according to Wilson. "She's so smart about what she does," senior Heather Braunagel said. "She knows how hard to hit, when to swing, when to just toss it in there. She knows how to change people's attitudes. There's always this emotion she plays with that drives everything. She celebrates with some much joy." Even with all the emotion and energy that Gaughn brings to the court, Braunagel says that Gaughn never lets it get the best of her. "She goes with the flow," Braunagel said. "Whatever things come her way, she deals with them and moves on to the next thing. I think it totally applies to how she plays volleyball, in that it's a game to 25 points, and not one point. When we win a point, she's not celebrating winning the game, she's celebrating winning the point and moving on." Though Gaughn and the other seniors, Braunagel and Kelsey Musselman, will depart Columbia without the Ivy League championship rings that they hoped for, Gaughn says she recognizes the impact that her class will have on Lions volleyball for years to come. "With the three years of putting in so much commitment and sacrifices, it's not hard to wear your heart on your sleeve," Gaughn said. "I feel like it's safe to say that the underclassmen know how much the senior class cares and how much we put into it." From a program that sat at the bottom of the Ancient Eight standings, Gaughn, the seniors, and Wilson have transformed the Light Blue volleyball program into serious championship contenders every year. The current senior class is now vying to finish in third place for the third consecutive season. "Every year keeps building on what we had in the beginning," Braunagel said. "Yeah, we're out of championship contention now. We're the stepping stone. The girls below us­—I know they'll have the rings, but it'll be our championship too." Regardless of how this season ends, Gaughn notes the changes that have improved the Lions volleyball program as a whole. "The commitment level to volleyball has gotten so much better," Gaughn said. "The culture is so different. Columbia means something different than three years ago, when it used to be an easy win, and now the thought process is so much different." sports@columbiaspectator.com