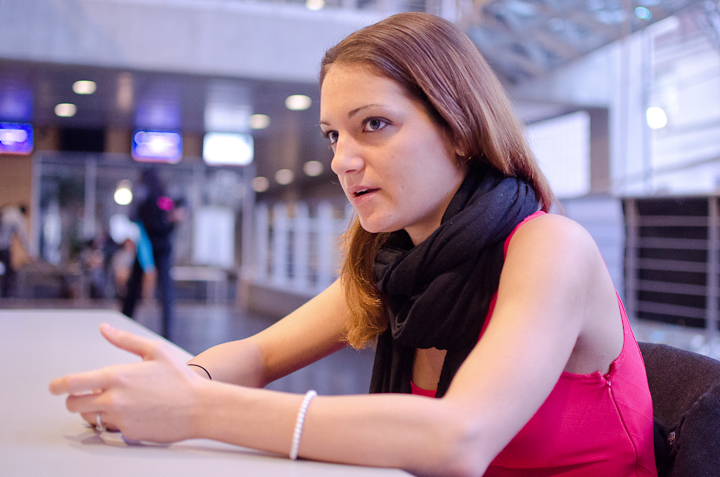 When Ashley Simone decided to start a family, she didn't expect to feel self-conscious. But after getting married and conceiving her son during the summer before her senior year of college at Baylor University, she couldn't help it when she caught people staring as she walked across campus. "Most people choose to delay children as much as possible, especially while they're in school, and I just feel like the fact that it's so rare makes it more shocking," Simone said. Now a Ph.D. candidate at Columbia's Graduate School of Arts and Sciences, Simone has become involved with Columbia Right to Life to help other students who might feel marginalized by having a child in college. This stigma is part of what CRL hopes to address with a new initiative, Support for Pregnant Students. After the University changed its health insurance policy this summer so that abortion was not guaranteed coverage for all students, abortion became a hot-button issue on campus. The Columbia University Democrats successfully advocated for funding last month to ensure that no student would go without abortion coverage. Now, Columbia Right to Life is seeking similar support for women who make the other choice—to keep the baby and carry their pregnancy to term. "The truth is, the first thing that any student will hear if they find themselves with a planned or unplanned pregnancy on Columbia's campus is the first option they're offered is to abort," Julia Salazar, CC '14 and president of CRL, said. "And we feel, especially as part of this initiative, that both options should really be presented equally in order for there to be a fair choice between the two." CRL began working on its Support for Pregnant Students initiative last semester when the members realized the lack of resources on campus for women choosing to keep a pregnancy, Salazar said. "There was a concern that maybe because of the system, there was pressure for women to choose to terminate the pregnancy. So it was not accusing the Columbia administration of not supporting women, but wanting to know, 'What are the resources?'" said Pete Cerneka, CRL's Student Governing Board adviser and associate director for the Office of Civic Action and Engagement. Cerneka said that the initiative is still in its early stages, but so far he has helped group leaders reach out to relevant campus offices such as Alice! Health Promotion and Residential Programs. Salazar said she also approached Health Services to inquire about options for pregnant students, but found the information inaccessible and ambiguous compared with that available about terminating a pregnancy. The Health Services website lists pregnancy evaluations, pregnancy options counseling, and referrals for prenatal care among the services it provides. While there is no printed material about Columbia's health insurance policy at the Health Services office, an online brochure on the Health Services website states it covers medical expenses for childbirth "as any other condition." It also covers prenatal care, including "comprehensive lactation support and counseling services," according to the brochure. Depending on a student's plan, Columbia health insurance will also pay for between 50 and 100 percent of "well newborn nursery care expense," which includes hospital nursery care immediately after a baby is born, physicians' charges for circumcision, and visits to the newborn in the hospital. Two breast-feeding rooms also exist on Columbia's campus, according to Salazar—not enough to make it easy for a woman to find a private place to breast-feed, she said. While CRL does not know how many women might take advantage of these types of services, Salazar said she feels their presence is important. "What we do know is there are a lot of pregnancies, whether carried to term or not—typically not—on Columbia's campus. We know that because of the sheer number of pregnancy tests that are received through Health Services," Salazar said. Health Services did not respond to questions about the number of pregnancy tests it administers or the number of students who take advantage of its pregnancy-related services. Cristen Kromm, assistant dean for community development and residential programs, said that in the past seven years, only one student has needed post-delivery support from Residential Programs. "Although our undergraduate housing is not configured to support families, we were able to accommodate her needs by partnering with University Apartment Housing," she said in an email. In addition to making policies more accessible, Salazar said the initiative also aims to change the campus attitude toward pregnancy. Simone, the GSAS mother, said that everyone at Columbia, including the administration, has been very supportive. GSAS gives both maternity and paternity leave for students in their first through seventh years, and offers a $1,000 child care subsidy for children under five. But Simone said carrying a pregnancy to term would probably be more difficult as an undergraduate. "I think a lot of times surrounding pregnancy there's a sense of shame, and there's no reason to feel shame," she said. Salazar said that although the group hasn't yet spoken to many other students about their ideas, she believes the campaign is something everyone can support. "I really hope that especially in light of their support for students having options in Health Services this year—with the changes to the Health Services fee—I'd hope that would be also reflected the same way," she said. Simone said, "Regardless of where you stand on the issue of pro-life or pro-choice, everyone agrees that pregnant women who are students should be supported and welcomed by their community and assisted to make sure they can thrive." abby.abrams@columbiaspectator.com