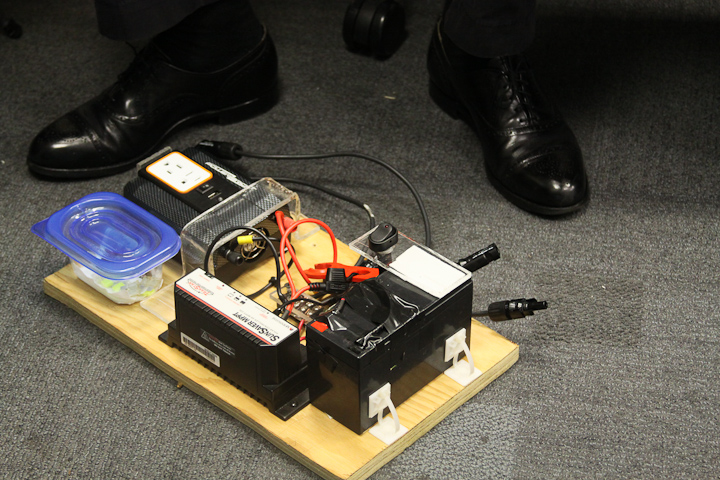 When it comes to solar power, nothing stops SEAS doctoral candidates Garrett Fitzgerald and Rob van Haaren—not even a hurricane. A solar generator that the duo built is providing power for St. Gertrude's Church in the Rockaway Beach area of Queens, where many residents are still without electricity three weeks after Hurricane Sandy. Fitzgerald and van Haaren, who plan to travel cross-country in a car fueled by the solar-powered trailer they built, didn't anticipate using the device for several months. The trailer was set to stay in storage until the summer, but that all changed when winds picked up outside its New Jersey storage facility as the storm approached. "The tarp was blown off by the wind, so we had to go there to put it back," van Haaren said. They soon realized that instead of securing the device for the storm, they could put it to use helping people in need. Once the solar generator arrived in the Rockaways, which van Haaren described as "a ghost town," it was in high demand. "Initially, when we started emailing about the location, a lot of people wanted to have it," van Haaren said. "We needed some good open space where there is a lot of sun, so we put it in St. Gertrude's Church, which is set up as a volunteer youth and community center." Fitzgerald and van Haaren drove the generator to St. Gertrude's on Wednesday. Since then, it has provided full power for the church, with the exception of the heating system. "Yesterday, we generated about 33 or 34 kilowatt-hours," van Haaren said. Van Haaren said that although a small conventional generator can provide as much power as his system, the problem following the storm was a lack of access to fuel. SEAS professor Vasilis Fthenakis, an adviser to van Haaren, said that solar generators are a viable option after storms that cause grid failures. "The resilience of PV generators during storms and earthquakes shows the advantage" of the technology, Fthenakis said, referring to photovoltaic power. James Yardley, managing director of the Columbia Nanoscale Science and Engineering Center, said that study into PV technology will "lead to significantly higher efficiency for conversion of sunlight to energy." SEAS has numerous programs underway to "impact New York City and its energy needs," Yardley said. Fthenakis said connecting the school and the city is an aim of SEAS curricula, and van Haaren and Fitzgerald's work exemplified this link. "Several of the students in my course, PV Systems Engineering and Sustainability, are working on NYS and NYC projects," Fthenakis said, including providing power to the Manhattanville campus. Van Haaren and Fthenakis said the solar power used in the St. Gertrude's generator is the technology of the future. Part of the aim of their planned cross-country trip, van Haaren explained, is to popularize these innovations and to emphasize that everyone can play a role in lowering dependence on non-renewable energy sources. Fthenakis called van Haaren a "great ambassador" of this message. "If everyone would have a small system installed, they could run their refrigerator or something small," van Haaren said. Starting small, he said, can have a big impact—just like how his generator is helping hurricane victims. "This is a bigger movement that needs to happen," he said. shayna.orens@columbiaspectator.com