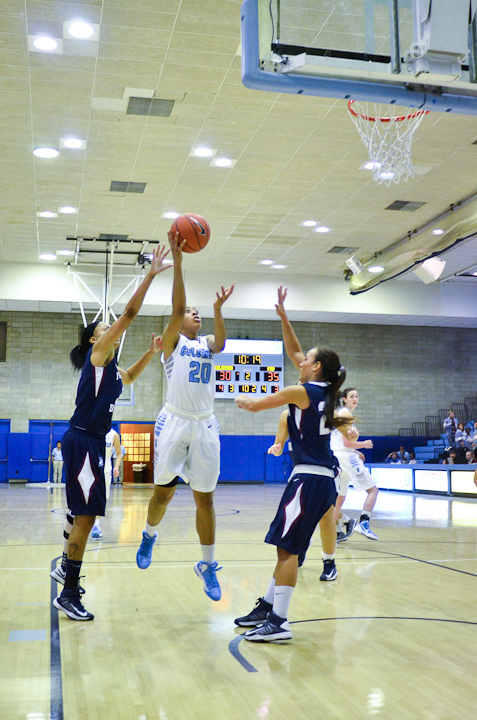 As a leading scorer of the team, senior guard Tyler Simpson is expected to play a key role in the Lions' efforts to match the offensive numbers of Army on Wednesday.

While the women's basketball team (1-4) managed a 63-58 victory over Army (5-1) last season, head coach Paul Nixon says that Wednesday night's matchup is going to be an entirely different ball game. "I think it will present a brand new challenge for us," he said. "Last season the Army team had a very distinctive style of play that I think we were able to take advantage of. However, this season they are playing in a completely different style, and they are doing very well in that style." Army's new style laregely comes down to the contributions of freshman center Aimee Oertner, who has given the team a boost by averaging 13.2 points and 10.7 rebounds per game. And Oertner isn't the only offensive catalyst for Army, as every player in the starting five has averaged at least 9.8 points per game this season. The Lions will look to their scoring leaders, senior guard Tyler Simpson and freshman forward Bailey Ott, to lead their offensive efforts Wednesday night. Although the team has had stretches of strong offensive production and has managed to build some significant leads, it has struggled to maintain this offensive dominance and has often fallen into scoring droughts. Going into Wednesday night's matchup against Army, the team will strive to maintain a more consistent offensive presence, Nixon said. "It hasn't really been our defense this year that has let us down­— it has been a lack of production on offense. We are looking to have a breakthrough game on Wednesday and really put some points on the board," he said. In terms of finding consistent offensive hustle, senior guard Brittany Simmons has been a bright spot. Last week, Ott said that every player on the team should strive to match Simmons' hustle. "I think the only thing you really need on a basketball team to keep going is energy," Ott said. "Brittany is a great source of energy every time we get on the court, so I have tried to follow in her footsteps, and I thrive off of her energy, and the whole team does." In light of Army's strong start to the year and the Lions' periodic scoring droughts, Nixon said that the Lions "are going to have to regroup and bring a different game plan to the table." "I am very confident that our team will execute that game plan and be able to come out on top," he said. After battling injuries in recent games, Simpson and senior forward Courtney Bradford will be ready to play at full strength against Army on Wednesday. Nixon said they are both "going to be at 100 percent." The action starts Wednesday at 7 p.m. away in West Point, N.Y.