Student movement to divest in fossil fuels comes to campus

Student movement to divest in fossil fuels comes to campus 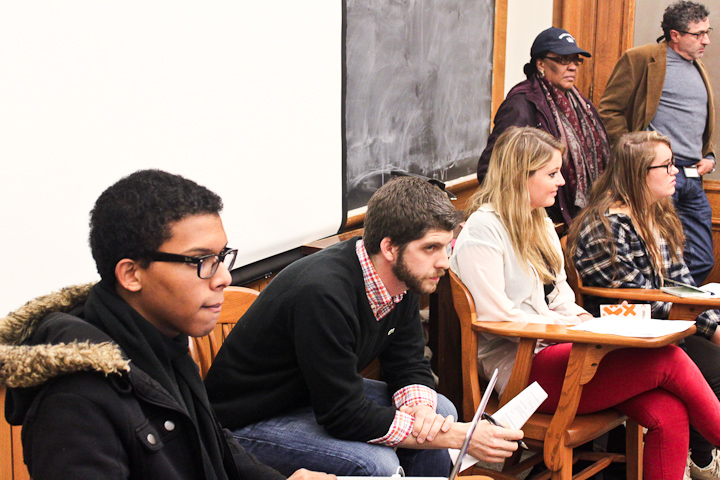 Barnard Columbia Divest aims to pressure the Columbia and Barnard administrations to drop their endowments investments in fossil fuel companies.

A group of students has joined a growing movement at colleges across the country and has launched a campaign calling on Columbia and Barnard to drop their investments in fossil fuels. Barnard Columbia Divest, which was started in November, will ask the University to stop investing in energy companies. Joe Shortsleeve, GS '14 and one of the group's co-founders, said he was motivated to form the club after reading an article by environmentalist Bill McKibben, which predicted that the amount of fuel in energy companies' current reserves would skyrocket the world's carbon emissions well above stable levels. It is unclear how much, if any, the University invests in fossil fuels. A University spokesperson did not return requests for comment. Kristina Johansson, a visiting student from Middlebury College and a co-founder of the group, acknowledged that any dollar amount that Columbia and Barnard could pull from fossil fuel companies would not significantly damage them. "On its own, divestment doesn't do very much," she said. "But as part of a national strategy—that is, 200 schools flooding Exxon—that's a political statement, and the government has to pay attention. The point of it is to publicize this crisis and disrupt the cycle." Similar campaigns now exist at more than 100 colleges, including some State University of New York schools, Vassar College, Cornell University, and Harvard University. About 45 people gathered for the first general interest meeting last week. "I'm here because I'm scared for my children," Gerald Posner, a School of Continuing Education student, said. Collectively, he believes, we "have to make sacrifices if we will continue to survive" as a species. Lilieth Finegan-Young, SCE, who is studying sustainable development, agreed. "I'm scared for my grandchildren, my great-grandchildren," she said. University President Lee Bollinger told Spectator on Friday that he is not directly involved with the student-faculty-administration committee that shapes the University's investment policy, and is unaware of whether the University's endowment currently invests in fossil fuel companies. "The general approach is that we will not put restrictions on investments unless there is a strong and overwhelming case that we're assisting highly immoral and unethical activities," Bollinger said. "The bar has to be very high, and the reason is there are lots of things that people don't like about the world, and so if you start saying, 'Well, we're not going to invest in this because we don't like pollution, and car companies make pollution or this industry makes pollution, and therefore we're not going to invest,' then pretty soon you don't have anything to invest in," he added. He said that the case could be made against investing in fossil fuels, but that he has not yet heard a convincing argument. Of the undergraduates who voted in Harvard's Undergraduate Council presidential election last month, 72 percent, or about 2,600 undergrads, supported the Harvard divestment campaign, making it a part of the official policy of the Undergraduate Council. A week later, a Harvard spokesperson told the Crimson that the university's investment company would not consider divesting its $30 billion endowment from fossil fuels. Johansson said that, while club members were skeptical that they would hear much more, the Harvard divestment club is still active. "It's not over," she said. "It's not a two-month campaign." K.C. Alvey, a field organizer with Do the Math—McKibben's campaign, which is run through 350.org—and who is advising with New York-area colleges' divestment clubs, said that even if Columbia doesn't agree to divest, the group will still have served a purpose. "Even if we don't succeed in doing that, we may still succeed if we get this message across to a large amount of people that there's a campus full of people here at Columbia who think that it's not acceptable to be putting money into an industry that has as its business plan the destruction of all our natural resources," she said. news@columbiaspectator.com Correction: A previous of this article stated that there were about 30 people at the group's first meeting, rather than 45. A previous version of this article also referred to McKibben's organization as Do the Math, which is a campaign being run by his organization, 350.org. Spectator regrets the errors.