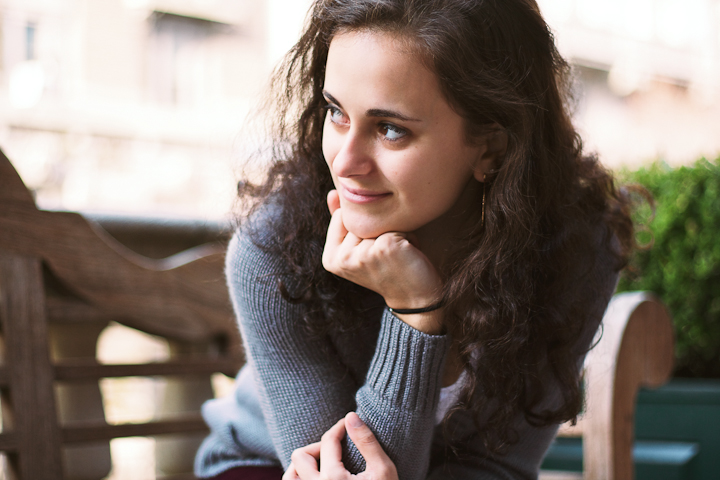 Elyse Pitock tried to take on her own struggles with OCD in her work of fiction.

A vision of the end of the world had cast its morbid glance on Elyse Pitock, BC '15.

In the wake of a seemingly apocalyptic Hurricane Sandy, Pitock recorded her vision, submitting it to the New York Times' Opinionator. "When the World Ends," a short fiction work, throngs on insufferable anxiety, wrought through a starving speaker who eventually deteriorates "black-hole-style."

The Opinionator's Anxiety blog focuses on how humans "navigate the worried mind, through essay, art and memoir," according to its website. Pitock said she had the work in mind for weeks before the storm hit, and that it flowed out when she had solitude and time to hone her idea.

"I wanted to hit a picture of what it feels like to be anxious; a jarring feeling that tells you that everything is really important: heart pounding, wrong decisions, everything going disastrously," she said. "I wanted to make the work as dramatic as possible."

Yet, the piece touches a number of personal levels that illuminate through the prose. She had suffered OCD in silence for the past year, and felt as if she had something to say about it.

"This essay was inspired a lot by my OCD, which became really bad last year and had always been a big secret," she said. "I had never met anyone who had it and I didn't understand or know what was happening. I would have liked to have read something that pertained to what I was going through, but rather, I wrote about it for other people to read and have those conversations about their anxieties."

In her piece, two lines highlight the confusion of the anxious individual: "Everything lies. Everything is tainted." With this and the image of the starved individual, there have been a variety of reactions to the piece. While some hailed her writing skills, other commenters on the article attacked Pitock personally, saying things like, "Get a real life, and you may get a real body," or"My guess is that your author is suffering from depression"—despite the fact that the piece was marked as a work of fiction.

"I was mostly trying to dramatize the experience of not being able to make a decision. I have struggled a lot with OCD, so that was what the article was also supposed to be about," she said. "But because of focus on food, it's gotten a lot more response from those with eating disorders. For me, more about obsessions, but people saw it in a number of different ways."

Despite the roots of the essay, its publication was a special moment for Pitock and her family. The same day, she explained, her father, Todd Pitock, published a piece in the travel section of the newspaper.

These awards marked her beginnings as a playwright. In eighth grade when she wrote a play about a boy with Asperger's for her English class, her teacher had submitted the one-act play to Philadelphia, where it was eventually performed at Temple University. It was then sent off to a national competition in New York, where she eventually got to see it performed at the Cherry Lane Theatre off-Broadway. During her junior year, she jetted off to Los Angeles where she "got to see child actors for the first time." The subject matter of this play hits on a topic that interests her greatly.

"I've always been interested in how people's minds see world differently and how two people can have two versions of same story that are so different but equally truthful. For that reason, I am incredibly interested in disabilities," she said.

Brilliant writing and award winning aside, Pitock said that she finds writing a "very painful and terrible process" and usually hates "every second of it." Pitock said that the reason that she writes is a product of her love for reading.

Though the intricacy and power of words captivates her, she has a hazy view of her future with writing or playwriting. Rather, she said she wants to focuses on the work she is doing now.

"I really love words. I like reading, and though I don't like writing, I like what it means to write," she said. "I hope that this piece in particular can make someone else feel like it relates to them. I hope that people can talk about what I wrote and that the conversations that it incites can help them learn from it."

That is, of course, if the world does not end.