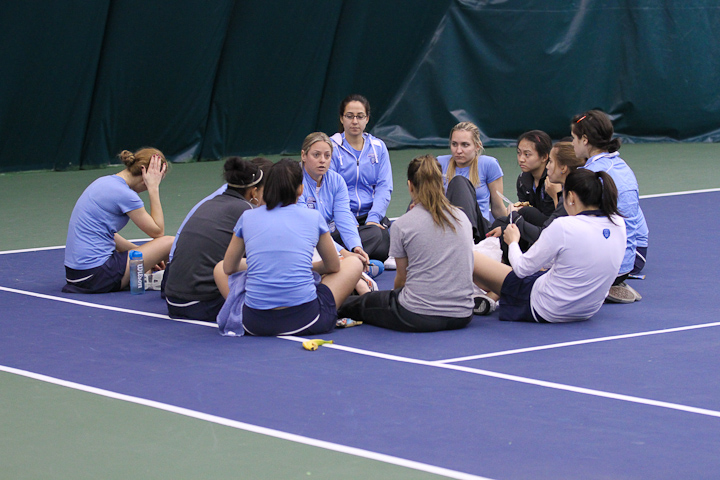 With mental toughness comes the ability to right the ship quickly, which often comes from the mid-game communication between athlete and coach.

A five-tool player is the most coveted position player in baseball. He is skilled at base running, hitting for power, hitting for average, fielding, and throwing. There is, however, an unspoken, equally important sixth tool: the psyche. The idea of sports psychology has been around for more than a century, but since the Association for Applied Sport Psychology's founding in 1986, the field has burgeoned. More and more college and professional teams are employing sports psychologists. This year, Columbia became one of these teams. Shortly before the start of the fall 2012 semester, Columbia brought on sports psychologist Dr. Brent Walker, an executive board member at the AASP, to work with the school's athletes. Walker uses a variety of strategies when working with athletes, tailoring his approach to each sport. "Many fencers, golfers, and tennis players have only participated as individuals through their junior experiences and college marks their first experience participating on a team," Walker said in an email. "This creates a series of mental challenges as they try to function not only as a competitor, but as a teammate as well. Working with these teams still primarily involves an individual focus, but includes some group dynamics works as well. "In sports like basketball, soccer, football, and lacrosse, group dynamics play a much larger role. In these settings, there is a balance between focusing on being your personal best, and balancing the needs of the team," Walker said in his email. Baseball is a somewhat unique case. Although it is technically a team sport, there is considerable pressure on the individual that one doesn't find to the same degree in basketball, soccer, or football. In addition to working with Walker, baseball head coach Brett Boretti implements his own psychological training tactics with his team. "Every guy on our team gets the book Heads Up Baseball [by Tom Hanson] as a Christmas gift and are told to read it over break at the end of their freshman fall semester," Boretti said in an email. In practice we harp on what we control versus outcomes you don't control. Basically, you control three things: Your attitude, your concentration, and your effort." When working with athletes, Walker uses a variety of tools. Walker has taught undergraduate and graduate courses at Eastern Illinois University and worked with the U.S. Paralympic soccer team, so his real-world experience complements his academic credentials. "Several mental training techniques are helpful, including visualization, goal setting/performance profiling, relaxation training, biofeedback, and focus training. However, for a majority of athletes, the most important is cognitive restructuring," Walker said. Cognitive restructuring is a form of behavioral therapy that works to identify thoughts that are detrimental to the psyche and subsequently learn how to change them. It is especially crucial in the face of adversity and struggle: All athletes have off nights, and there is always a losing team. The way athletes cope with these difficult situations ultimately determines future success. "Resiliency is a large component of mental toughness and integral to championship performance," Walker said. "Many athletes struggle with adversity because they define success simply in terms of achievement. Being able to bounce back from failure and adversity comes from choosing to define yourself by your response under less than ideal conditions. When you choose to define yourself by your response rather than the outcome, it enables you to continue to strive when things look bleak." Men's tennis head coach Bid Goswami finds that just talking to his athletes during a match can be helpful. "When I see somebody very nervous and they're edgy we just go back to basics about breathing, moving your feet," Goswami said in a phone interview. "When you're nervous, you don't breathe well, and if you don't breathe well, you don't move your feet well, and then chronic elbow comes into play here. Your elbows are cemented, so then everything falters." "You have to communicate with him. Listen—things are never as bad as they seem and things are never as good as they seem,'" Goswami added. "But that player has to control his thoughts. He's useless if he's already defeated because he doesn't believe he can do it. A lot of times you can tell from a player's body language how their day is going. That's never a good thing. You should think positive, breathe positive, and get ready to compete as smart and hard as you can." While Goswami believes that sports psychology can be beneficial, it is useless if physical fitness isn't up to par, he said. "To become a really good tennis player, the most important part is physical conditioning," Goswami said. "If you're in great shape, you have good technique and you have good footwork, and then the last part comes in, the intangibles, the sense of the game, that's when probably the mental part also comes in. But I absolutely believe that if they're physically in very good shape, they become stronger mentally." Boretti echoed Goswami's sentiments. "The routines and mental prep should allow your physical abilities to be free and compete. There should not be a ton of thinking while competing," Boretti said. "There should be a trust in your preparation both physical and mental that gives you the confidence to perform to your potential and let the chips fall."